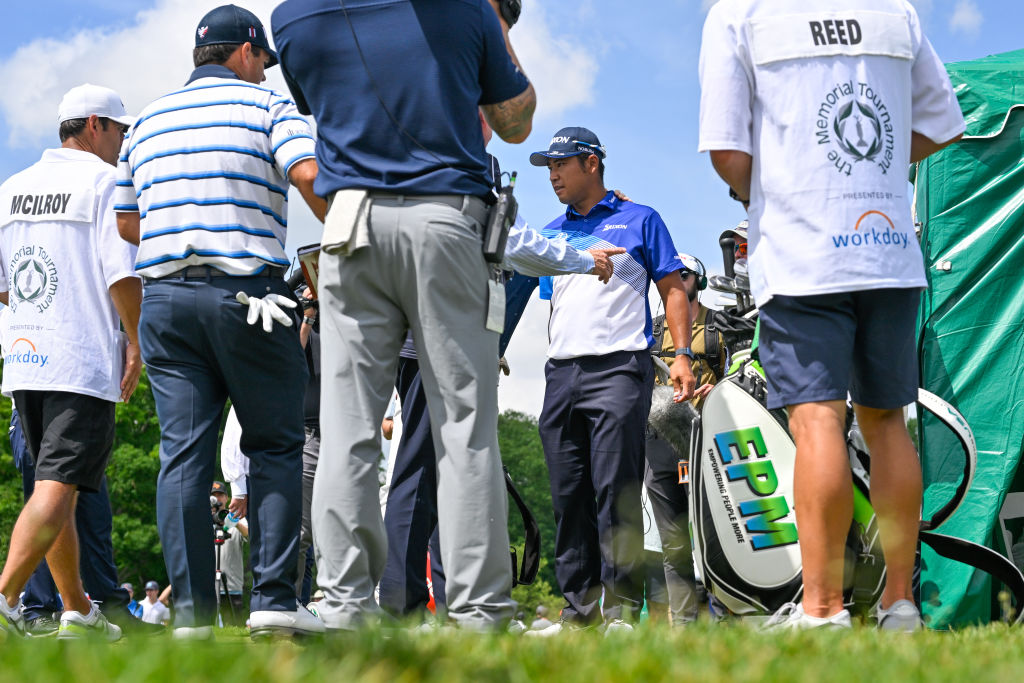 Hideki Matsuyama of Japan is disqualified from the tournament on the 10th tee box during the first round of the Memorial Tournament presented by Workday at Muirfield Village Golf Club on June 2, 2022 in Dublin, Ohio. (Photo by Ben Jared/PGA TOUR via Getty Images)

You would think that someone of Hideki Matsuyama’s stature or those around him would not have allowed him tee-up in any tournament for fear of being kicked out after what was described as ‘white out’, the paint-like substance we used to correct mistakes on paper, appeared on the face of one of his clubs.

That’s exactly was happened to the former Masters champion and present World No. 12 when he was unceremoniously thrown out of the Memorial Tournament midway through his first round Thursday afternoon after using an illegal marking on the face of his 3-wood.

Matsuyama was 3-over after nine holes when tournament officials were made aware of the ‘marking’. The Japanese golfer was involved in a lengthy discussion with Tour officials before being shown a red card, and a first DQ in his illustrious PGA Tour career.

“Our committee became aware through some pictures that were posted that there may be a substance that has been painted on the face of one of Hideki’s clubs,” said Rintoul.

“Unfortunately, when we found out about it, Hideki was playing the second hole.

“And we approached Hideki and went through the process. Hideki, are you carrying this club? ‘Yes’, he said. He was also asked: ‘Have you used this club?’ Because if he hasn’t used the club, it’s okay to carry a nonconforming club, you just can’t use it.

“Well, the poor guy has played one hole, and he managed to use it off the first tee.

“At that point, without jumping to too much conclusion with the club and what exactly what was done to the club, I met Hideki at the fifth tee. The damage was done. One shot and it’s a disqualification.

“Hideki said he just kept playing. We’ll do our due diligence with this club with the USGA, the equipment standards guys and our committee, to ascertain that we come up with the right result here.

“I met Hideki at the fifth hole. Took some very detailed pictures of the club. These equipment rules can get real finicky real quick. They’re not like the normal getting a guy off a cart path stuff, right?

“So took some pictures, regrouped with the USGA equipment guys, John Mutch who represents us in equipment standards committee, and went through what is outlined under the equipment rules under rule 4.a.(3) of the equipment rules that says: A substance or any treatment can’t be applied to the face of a club which could influence the flight of the ball, the spin, the loft or anything on the ball, how the ball performs.

“So, at that point it was how much of this substance is actually on the face of the club? And the pictures were damning. He had so much of the white — you’ve seen pictures of it. There was a lot of the white — it’s very much like a whiteout you might use on a paper — on a paper at home. A whiteout substance that was very much up on the face of the club which, really, it’s very clear in equipment rules that’s not allowed.

“So, not being allowed renders a club nonconforming. Now we go back into the rules of golf themselves and out of the equipment rules, and the rules of golf clearly state under rule 4.1.a. that the use of a nonconforming club is a disqualification. My worst fear — I was hoping he hasn’t used it the first tee, hasn’t used it the second tee. We were going to get to him before the third tee, which I’m thinking he might use it on the third tee. But the damage was done on the first hole, unfortunately. Just an unfortunate set of circumstances for Hideki for sure.

Matsuyama playing partners Rory McIlroy and Patrick Reed ended their round as a twosome and will also play the second round of ‘Jack’s Event’ as a two-ball. Matsuyama teed-up at Muirfield Village in Dublin, Ohio in search of his third PGA Tour victory this season after winning the Zozo Championship last October and the Sony Open in January.