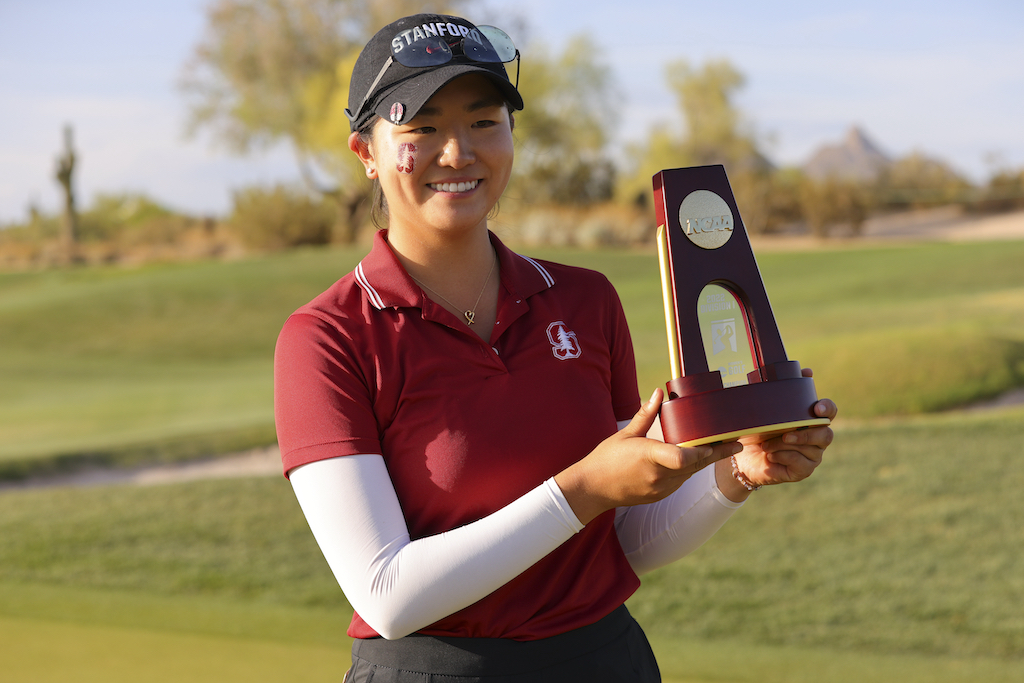 Rose Zhang’s reign of dominance atop the women’s world rankings shows no sign of stopping after running out a three-shot winner at the NCAA Division I Women’s Golf Championship at Grayhawk Golf Club on Monday.

For anyone who’s been following the progress of Zhang, the Stanford star’s latest victory will have come as no surprise.

The freshman, who only turned 19 today [Tuesday], took the college scene by storm when winning her first three events but given this was Zhang’s first shot at a national title, even the prodigious Californian talent seemed taken aback by the speed of her latest success.

“To be a national champion in my first NCAA, I just can’t explain it,” said Zhang. “It’s hard to describe in words, I feel like it hasn’t really settled in yet. I didn’t really know this date would come.”

Zhang follows in Stanford teammate Rachel Heck’s footsteps who also captured a national title in her freshman year and Zhang was quick to pay tribute to her teammate for supporting her ahead of a nervy final day.

“I’m rooming with her this week and last night even when I was in the same position as her as the previous year, she told me if there’s anything you kind of want to share, or any nerves that you want to talk about, I’m here because she went through it,” said Zhang.

“Just being able to have that connection with her, I feel like it’s just so, so special. I am so inspired by her.”

The only surprise was that Zhang showed human traits on Monday as she struggled to close it out. It was a final round 75 in the end, but in truth, the tournament had been put to bed with rounds of 68, 70 and 69 opening up an eight-shot lead ahead of an understandably wobbly finish.

“She really grinded today, it was really cool to see because it wasn’t an easy day,” said Stanford head coach Anne Walker.

“It’s never easy to close a big one. I think everyone knows that, we saw that yesterday at the PGA Championship, and it’s no different. This means a lot to her, but the fact that she was able to grind and just stay present and persistent to the very end, it’s cool.”

What’s clear from Zhang’s performances is that her game is already tailor-made to turn pro. The now 19-year old could’ve turned to the paid ranks and chased golf’s riches before ever making her move to Stanford but as part of the world class golf programme on campus, her game continues to develop and evolve while the pro game goes nowhere.

From 27 WAGR counting events, Zhang has now posted 17 top-10 finishes and 9 wins while her performances have seen her world number one ranking stretch from September 2020 when she first reached the summit – though she has some way to go to match or better Leona Maguire’s 135 weeks atop the women’s rankings.

Still, even with such a glowing CV so early in her career, and a reputation to boot, Zhang never expected this past week’s success to arrive so soon.

“I feel like coming into this week, I definitely did not expect it,” said Zhang. “Even though I was the player to watch, I didn’t really have that expectation.”

Zhang is sure to be the star of the 2022 Curtis Cup at Merion Golf Club outside Philadelphia from June 10-12 where Castlewarden’s Lauren Walsh will look to test herself against the best player in women’s amateur golf, and arguably in amateur golf full stop.

If you want to get to know more about Rose Zhang and the Stanford Women’s Golf Programme, we’d highly recommend checking out the video below. A ‘Week in the Life’ was produced by the guys at No Laying Up and offers a great insight into the US college golf system and exactly what it takes to compete at the top level of amateur golf.