Triple-threat of Boucher, Moran and Griffin share halfway lead after war of attrition at the Island 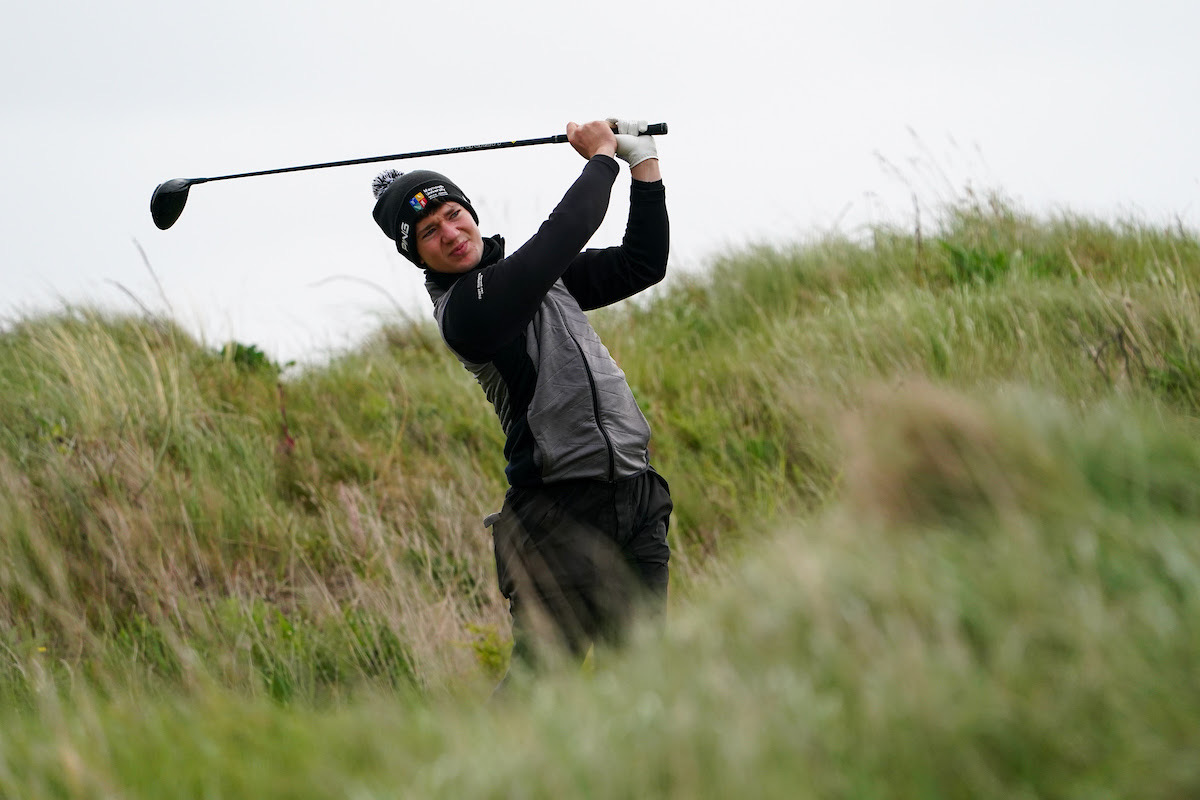 Ryan Griffin (Ballybofey & Stranorlar GC) on the 9th tee during the 2nd round of the Flogas Irish Amateur Open in The Island Golf Club (Picture: Golf Ireland / Golffile | Fran Caffrey)

It’s an All-Ireland trio at the top of the leaderboard at the halfway stage of the Flogas Irish Men’s Amateur Open Championship with Carton House’s Marc Boucher, Castle’s Robert Moran and Ballybofey & Stranorlar’s Ryan Griffin in a share of the lead on level-par.

It was an energy-sapping test of golf on Friday as the Island showed its teeth with no player breaking par on day two, round of the day was shot by Boucher who ground out a one-over 73 in the afternoon.

Teeing off in one of the final groups of the afternoon, the Dubliner got off to a dream start with two birdies in his first three holes.

From there it became survival of the fittest and bogeys on 16 and 18 had the Irish international on the ropes, but he showed his mettle on the front nine coming home in one-over 37.

A run of six successive pars was arrested by a dropped shot on the seventh but after a late hiccup from Scotland’s Matthew Wilson, Boucher was pleasantly surprised to find himself at the top of the leaderboard.

“That’s news to me,” he said when notified of his placing on the leaderboard. Made a couple of sloppy mistakes coming in but happy enough I would have taken 73 at the start of the day, conditions were tough and it was all about hanging in.

“It’s really just hold onto your hat and not make too many mistakes, everybody is going to make bogeys it’s about keeping the big numbers off the card and committing to shots that are difficult.

“The wind was pretty mad at the start and to start birdie, par, birdie was great. That exceeded all expectations so from there, there were a couple of chances but it was mainly about holding on and keeping the big numbers off the card so delighted with 73.”

Like Fahy, Boucher is staying at home this week and he feels having the pleasure of home comforts makes a difference.

“It’s all about patience and I’ll put the head down tonight and sleep like a baby, I deserve a lie-in!

“It helps, home-cooked meals, sleeping in my own bed it’s always better when you’re at home.”

When Rob Moran and Ryan Griffin completed their second rounds just after midday, they were happy but were expecting the wind to ease and leave them a few shots adrift, not tied for the halfway lead.

Both players chiseled out two-over 74s to lie on level-par which at the time left them in a share of 9th but as the wind howled players began to fall by the wayside and the duo began to creep ever closer to the summit and forced themselves into tomorrow’s final group alongside Boucher.

Moran has been in fine form as of late and he was happy with his round this morning despite three-putting four greens.

“I have played lovely the last few days seems like I am on the wrong side of the draw with a couple of shots here or there.

“I played lovely today I had four three-putts but it was hard putting on the greens but still not very good, but for the most part I played well.

“I just three-putted the first two. I’d say 8 o’clock was when the wind was at its strongest and you are just struggling to hold on to the putter so that happens sometimes.”

Meanwhile, Griffin produced the shot of the day, holing out from 170 yards with a 6-iron for an eagle-two on the 18thand he is relishing the prospect of competing for an Irish Open title.

“It was nice to finish the way I did,” he laughed. “We got the raw end of the draw both times. If you said to me I’d be two-over today I’d have taken it.

“There’s not added pressure being in this position. I’m just staying in the moment and sticking to the game plan. I am trying to be aggressive when I can and just play smart when I have to.”

Might we have a local winner? Joseph Hanney will be leading the home charge for the Island on one-over after a two-over 74 lifted him to a share of 4th alongside Alan Fahy and Wilson.

Hanney will be hoping for some strong home support when he tees off in the penultimate group.

“It’s really nice to have the home support out there especially looking for balls! Coming in on your home course in contention is really nice.

“Having those people there helps a lot, some of the balls wouldn’t have been found if it wasn’t for them. The front nine was a bit colourful but tidied up on the back.

“My game plan was just to keep it in play, keep listening to the caddy and hit greens that’s all I am doing. You need to know this place really well and I know it like the back of my hand now.”

West of Ireland winner Fahy produced another strong back nine to keep his hopes of a historic double alive. A three-over 75 kept him in the mix and he now has a realistic chance of becoming the first man since JB Carr in 1956 to win the West and the Irish Open in the same season.

Sligo’s Sean McLoughlin is a shot further back on two-over after a 76.

Scoring in round two was a whopping 79.6 and there are a number of big hitters waiting in the long grass. Former West of Ireland and Irish Close champion Hugh Foley is three back after a three-over 75 while Portrush Scratch Cup winner Matthew McClean is a shot further back.

The top-39 are separated by just eight shots with TJ Ford (+5), Liam Nolan and Peter O’Keeffe (both +8) hoping to blow in the right direction on moving day.