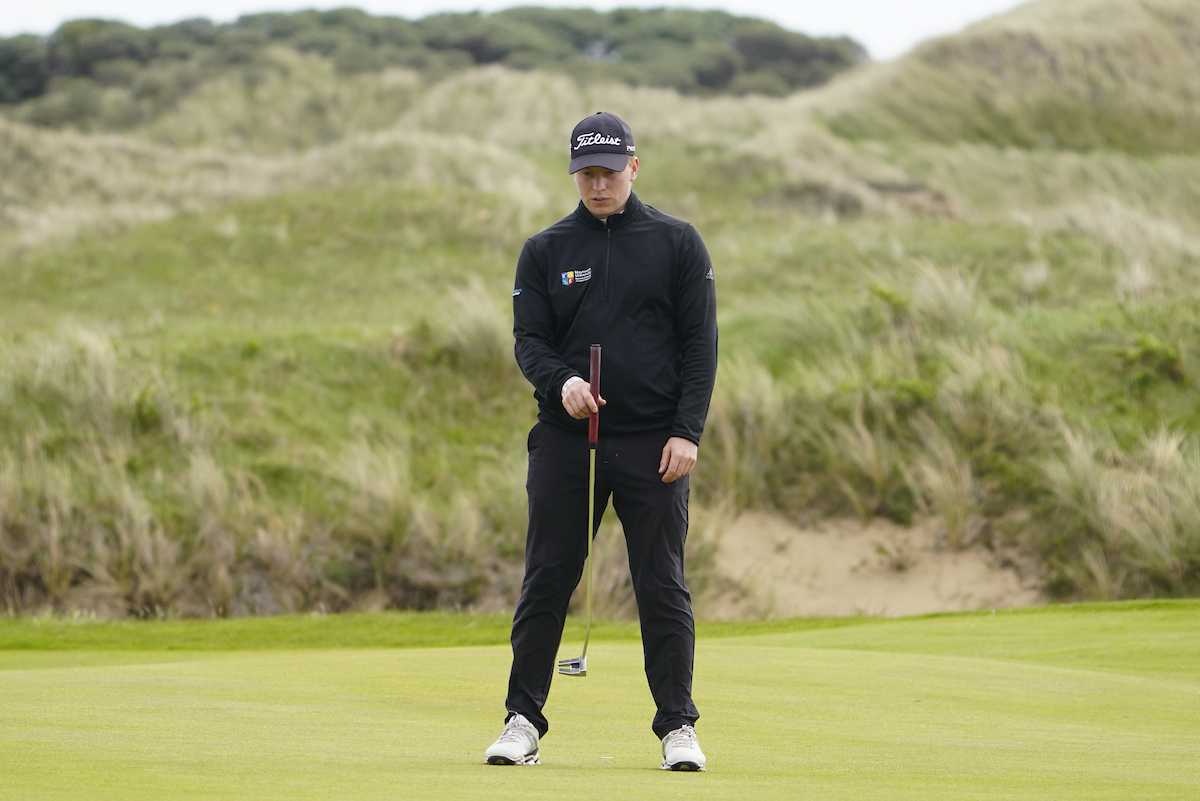 Another strong back nine kept Alan Fahy’s hopes of completing the West of Ireland and Irish Amateur double very much alive at the halfway stage of the Flogas Irish Men’s Amateur Open Championship on a devilishly difficult day at the Island Golf Club.

The North Dublin course showed its teeth with a howling wind that never let up from the first tee shot at 08:00 with players exasperated and exhausted at the completion of their rounds.

Bray’s Fahy remains on course to give himself a great chance of becoming the first player since JB Carr in 1956 to win the West and the Irish Open in the same season after a two-under back nine rescued his round and moved him to within three of Scotland’s Matthew Wilson.

The West of Ireland champion who shot a second round of 75 is a combined seven-over for both of his opening nines but two blistering inward efforts have him firmly in contention in a share of fifth on one-over.

“Happy with the day and how I fought back,” said a visibly exhausted Fahy. “I was five-over through nine and fought back with a two-under back nine so I don’t know what the story is I keep doing well on the back nine and hopefully I can keep that going tomorrow.

“I hadn’t a birdie all day and then two came in a row that was it really and the rest steady pars on the back nine. It was so hard out there today I just tried to keep my head down. It’s just such a grind, every shot you need to concentrate so hard and the wind takes it out of you.

“The good thing about being in one of the last groups is I can have a lie in tomorrow,” he laughed.

The former Maynooth University student was one of the numerous players who were blown down the leaderboard early on after dropped shots on the tenth, twelfth, thirteenth, seventeenth and eighteenth in an outward half of 41 but he remained patient and was rewarded with a brace of birdies on the third and fourth to reignite his hopes.

Fahy also made a sensational par from the thick stuff on the seventh to maintain his momentum and finished off his round with a pair of steady pars.

“I knew the scoring wouldn’t be great. Conditions were so hard today so it was about sticking in there. To be honest, I was trying to shoot a level back nine but managed to claw a couple of shots back.

“On the third I hit it right and got it up and down then on four I hit a nice one into fifteen feet and rolled it in. I actually had a couple more chances coming in but just missed them, you can’t look at all the stuff you missed because you always do stuff during the round that if you missed you would have dropped shots.

“I made a good par on seven and I had 20-feet for birdie on the last and hit it four by so it was nice to hole that one, it would have been a disappointing way to finish missing a short one after clawing my way back.”