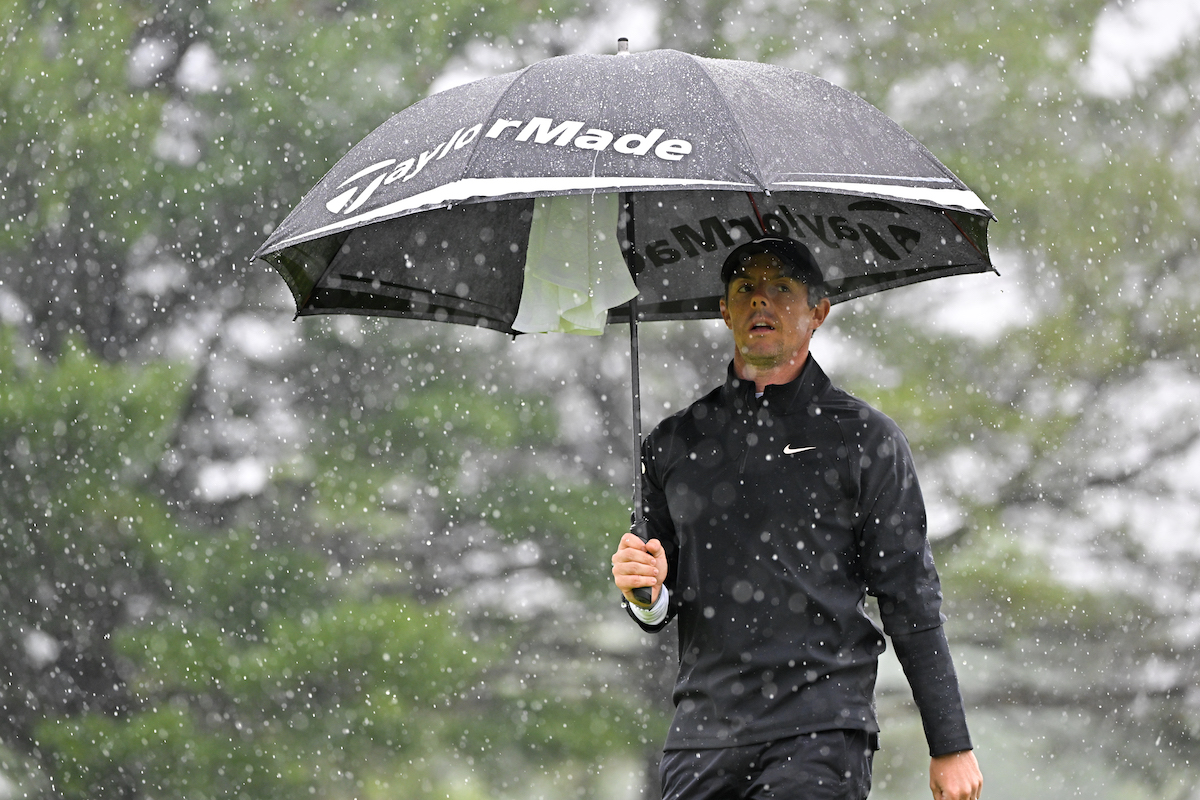 Rory McIlroy found calm amid chaos, wearing five items of clothing in producing the second-best round in continuing wet and miserable conditions on day three at the Wells Fargo Championship in Maryland.

The defending tournament champion was two-over after two holes but then played the next seven in four-under, ahead of nine closing pars in a two-under-par 68 to jump just over 40 spots and sharing sixth place on two-under.

Max Homa, and with a one-over 73, is in second place at six-under and one clear of India No. 1 Anniban Lahiri in signing for a 70 to be tied in third spot at four-under with American James Hahn, who bizarrely singled out a spectator being noisy in eating potato chips for missing his par putt at the last in his score of a two-over 72.

Bradley, McIlroy along with Canadian Nick Taylor and American Cameron Young were the only players to break par on day three.

The Maryland weather forecast of continued wet and miserable conditions was spot on for a second day running and with players again wrapped-up in rarely seen water-proofs, mittens and sporting umbrellas, and in temperatures of around 6-7 degrees Celsius on the TPC Potomac course.

McIlroy’s effort was not spectacular but given the conditions it did bring some warmth to those hearty souls out walking the course, and who could have been back home in front of the heater and not getting soaked.

“It didn’t feel really good out there but I played nicely even after getting off to a bad start with two starting bogeys”, said McIlroy.

“After that, I played really really nicely.  I turned in two-under after making four birdies pretty quickly.   I then gave myself plenty of chances on my back nine, which is the front nine on the card and while I didn’t birdie any of them, I hit plenty of fairways and greens which I needed to do.

“I wish I was a couple more shots closer to the lead but overall, it was a good day.

McIlroy, and among seven former Wells Fargo champions in the field, was off the 10th and emerged from back-to-back opening bogeys to birdie the 12th, 14th 17th and then holed a six-footer for a birdie ‘3’ at the par-4 18th and the ninth of his round.

As he pointed out, his inward half was nine straight pars but given the conditions, it was proving too much for those ahead of him and McIlroy finding that by producing pars was seeing him advance up the board.

“I committed myself to putting on five layers today, but then on the range and with so much clothing on, I could not make a full swing, and I could only make three-quarter and half swings the entire day”, he said.

“That’s all I did. I just sort of chipped it around.  If it was a 7-iron yardage, I would chip a little 6-iron and things like that.  I kept the ball out of the air.  Took spin off the ball and that definitely helped. “Looking ahead to tomorrow as it’s going to be cold again, so I need to get off to a good start, and if I can be a couple under through the first four holes, and get some of those tough holes out of the way, then I’ll be right there”, he said.

“You can see what the leaders did today, as it’s a struggle for everyone, so the key is going to be to stay patient, pick the birdies off when you can and try not to make mistakes.“So, if I can post a number like something in the mid-60s then see what the guys can do”.

The start to McIlroy’s sound led to the only PGA Tour third round tweet of McIlroy with video of the defending champion sending his opening drive into deep rough at his opening hole at TPC Potomac.

By the time McIlroy made the turn, over 40K had viewed the nine-second video clip of the Northern Irishman, and with a third of the clip in which you can clearly hear McIlroy letting out a long, drawn out sigh.

Then after posting a two-under par 68, those to view still the only McIlroy tweet had reached 55.8K.

Raise your hand if you’ve done this exact sequence of events on a drive ✋ pic.twitter.com/t63CmGzzNI

And in talking of tweets, there’s India No. 1 Aniban Lahiri, with a meagre Twitter following of just over 14K, but did not attract one PGA Tour tweet on round three despite staying in contention.

Lahiri may not be that well-known in the bigger social media picture but did he not finish a shot shy of victory right on the Tour’s doorstep at the 2022 Players Championship.

Perhaps, it’s time the Tour’s social media department looked outside their seemingly all-American twitter box. Though well done to PGA Tour Radio and affording Lahiri the courtesy of speaking with him post his round.

“I feel like a pro boxer having just gone 12 rounds, as you are just fighting every shot given the elements”, he said.

“If you had said I would shoot even par teeing-up, I’d take it but I do feel a little disappointment as I leaked a bit of oil coming in. I just could find fairways and you just can’t do that. “It was tough out there, man”.

And there’s Aussie Jason Day, leading by three after two rounds at 10-under, but the wheels of the leading stagecoach came off big time, with Day nose-diving in a three-hole stretch from the third posting bogey, triple-bogey and bogey and then after a bogey on nine, the former World No. 1 doubled the 10th.

The 34-year-old and present World No. 127 eventually posted a horror nine-over 79 to come to rest in a share of 13th place at one-under.