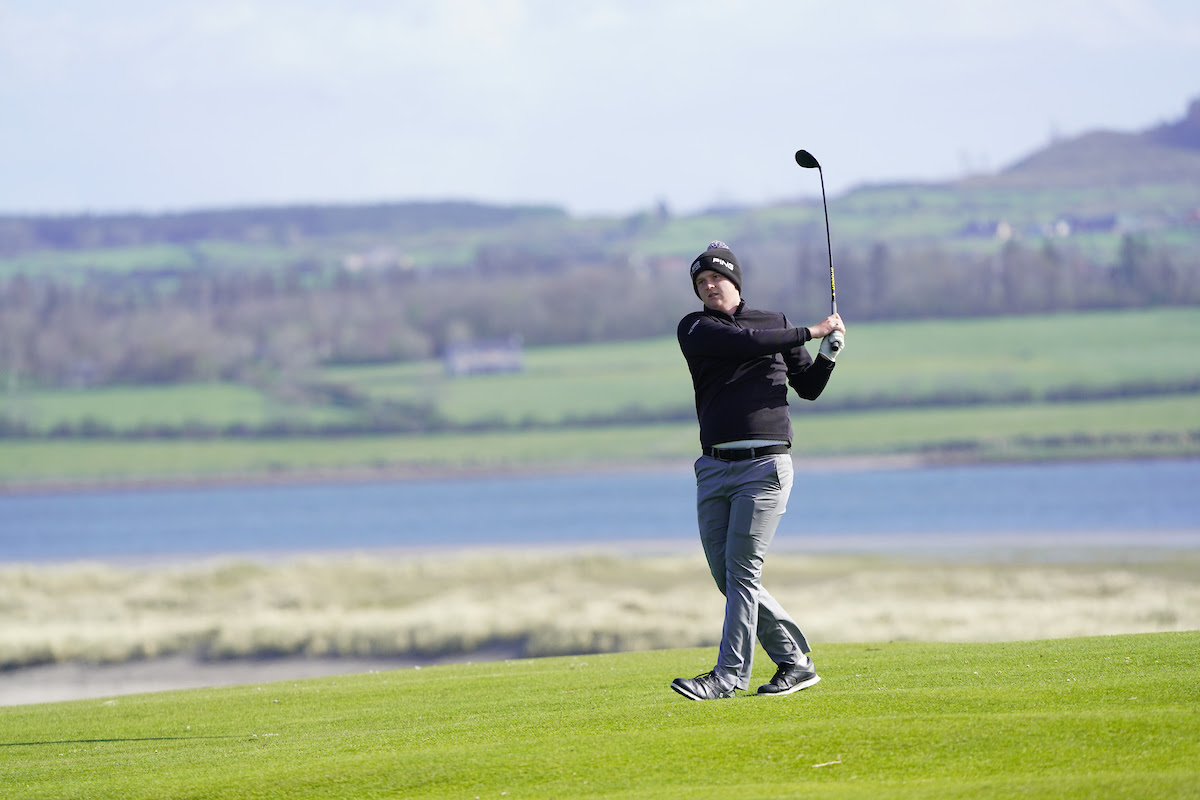 Allan Hill is relishing the prospect of lifting his maiden major title on Tuesday at the 99th Connolly’s Audi West of Ireland Championship after taking two huge scalps in the matchplay stages on Easter Monday at Co. Sligo Golf Club.

The Roscommon golfer beat the last two winners of this event in former Walker Cup player Caolan Rafferty (5&4) and Hugh Foley (4&2), both players also played key roles in helping Ireland to a first Home Internationals win since 2017 at the back end of the 2021 season.

Hill is one of three Connacht golfers in the semi-finals and winning the West would mean a lot to the 22-year-old who has had a love for Rosses Point since he was a child.

“My golf was really good today. It was nice to beat two Irish internationals”, Hill admitted.

“Obviously qualifying in last place to get into the 16 I wasn’t expecting too much obviously up against Raff who was playing some really nice golf so it was nice to get off to a really nice start by playing very well this morning and I continued that in the afternoon against Hugh.

“I’ve been coming to Co. Sligo since I was seven or eight. I remember watching Shane Lowry play here. It’d be lovely to win tomorrow, but it’s one step at a time,” added Hill who will face close friend Liam Nolan for a place in Tuesday afternoon’s decider.

It’s been all change this Easter week in Sligo with a new format coming in for the championship. After 54 holes of strokeplay the top-16 players advanced to the matchplay stages where the last-16 and quarter-final ties took place on Monday.

Hill birdied the 18th to qualify in 16th place before he beat leading qualifier Rafferty 5&4 having raced into a 3UP lead after as many holes before turning 6UP. The jury is still out over whether this format is the way forward for the championship but Hill couldn’t deny the fact he has benefited massively from the new championship structure having qualified a distant ten shots adrift of Rafferty on seven-over.

“Yeah absolutely it’s different to what I have played in over the last couple of years coming here. Obviously it has benefited me a lot, three rounds where the requirement was steady golf. So yeah, I am liking it so far!

“Yeah it was nice to birdie 18 on Sunday, I wasn’t really expecting anything coming to the links I thought four or five-over would make it. It was kind of carefree birdieing the last if I’m honest but it was nice to hole a 25-footer on 18 and I am pretty happy to keep playing.”

Hill has been in contention on the big stage before. He was in the final group alongside Peter O’Keeffe and Nicola Gerhardsen at last year’s Flogas Irish Amateur Open championship on the notoriously tough European Club.

When the going gets tough, Hill seems to get going and he has battled gallantly in the torrential rain and high winds over the last four days, but he loves it.

“Ah yeah I like tough golf courses I think when everyone struggles it seems to play to my strengths that sort of scrappy golf where it becomes all about getting up and down.”

Four students qualified for the last-16 – Nolan hasn’t played the Student Tour Series this season – with another two advancing to the quarter-finals as Ryan Griffin joined his Maynooth teammate Hill in the last-8.

The R&A Student Tour Series has proven to be beneficial for Hill who arrived in Sligo with consistent competitive action under his belt while other players were teeing it up for the first time this season as the West moved back to its traditional Easter slot.

The accounting and finance student feels the Student Series has helped keep him sharp ahead of the first major of the season.

“Yeah I feel like I have been on the go for a couple of months now so it’s nice. I know a lot of people have been playing during the winter season especially being over in Scotland for the Student Tour Series final, I know some players were in Sotogrande. I know some students will go over to play the events in Spain and Portugal so it’s nice to sort of keep that momentum going here this week.

Hill faces Nolan in the top match at 8am on Tuesday.