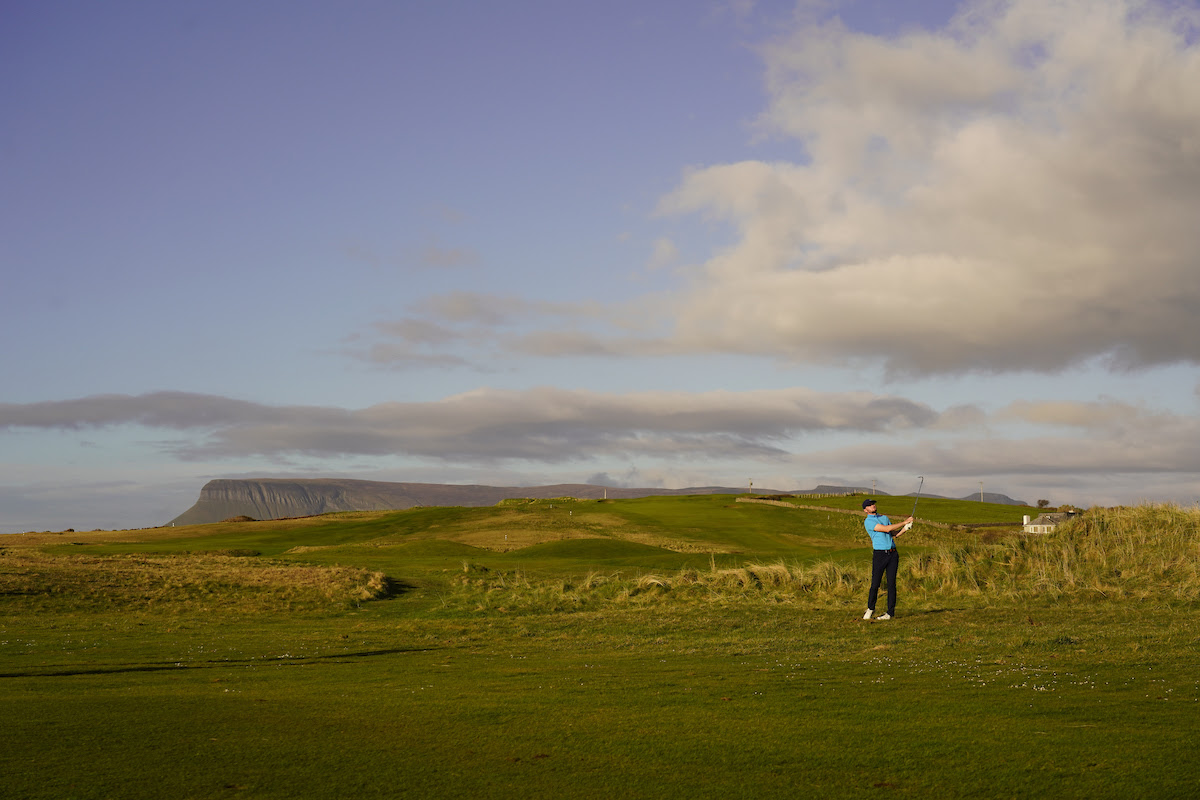 Hugh Foley’s defence of the Connolly’s Audi West of Ireland Championship is still alive after he came through a gruelling tussle with Marc Boucher in this morning’s last-16 encounter.

The match was nip and tuck throughout but it was Foley who went through thanks to a 1UP win as five of the eight matches went the distance.

Maynooth University’s Allan Hill provided the first shock of the last-16 as he dispatched leading qualifier Caolan Rafferty 5&4 in a match he led by six holes at one point.

The student squeezed into the last-16 at the eleventh-hour last evening with a closing birdie on the 18th and he rode that momentum in the top match of the knockout phase.

The Roscommon native has shown a liking to tough links courses and was in the final group at the Irish Amateur Open Championship at the European Club last year.

Hill who represented an international side on the Arnold Palmer Cup team last year will face defending champion Foley in the first match of the quarter-finals.

The next three matches all came down the 18th as Royal Dublin’s Foley saw off Carton House’s Marc Boucher by the minimum to keep his chances of becoming the first back-to-back winner since Rory McIlroy.

In the pick of the morning ties 2021 runner-up Liam Nolan showed great grit and determination to get the better of Irish Amateur and Close champion Peter O’Keeffe.

A big crowd walked the fairways following this match with the majority pulling the way of the NUIG Student. There were plenty of young faces on show with some waving the Connacht flag at every opportunity.

It was a match Nolan never led until the final putt on the final hole, a beautifully controlled wedge to six feet set up a fabulous birdie to take the match.

There was never more than one hole in it and the last third of the match was played out to a dramatic conclusion. Nolan of Galway drew level with O’Keeffe after an excellent birdie at the par-3 13th having passed up a glorious opportunity on the 12th.

The Galway man found the water off the tee on 14 and coughed up a double-bogey six to hand the initiative back to O’Keeffe.

O’Keeffe of Douglas three-putted from just short of the 15th green and Nolan managed to two-putt for a par and level affairs again.

Bridgestone Order of Merit winner O’Keeffe made a superb up and down for a par from way below the green on the par-3 16th to stay level with Nolan and after they both dropped shots on the 17th the large crowd scampered down the 18th to see the climax.

Both players left their drives out to the right and after O’Keeffe found the back edge of the green, Nolan landed the sucker punch with a beautifully controlled wedge to set up the chance for victory.

In the fourth match, Matthew McClean saw off the stubborn challenge of Eoin Sullivan as he beat the Carton House golfer on the 18th.

The Malone golfer got off to a hot start racing into a three-up lead on the front nine but he was pegged back by the Trinity College student.

McClean who won the Scratch Cup in Portrush last week held his nerve to win the 16th and two pars were enough to edge into the quarter-finals this afternoon where he will face Nolan.

There will be no overseas interest after Scotland’s Andrew Benson was beaten by Thomas Higgins of Roscommon in the only match to go beyond the 18 holes. Higgins got the better of the West Lothian golfer on the 19th hole to advance to a quarter-final tie with Ballybofey’s Ryan Griffin.

The Maynooth student beat Andrew Mulholland of Castlerock 2&1 to make it two Maynooth University students in the last-8.

Egan produced a late comeback to beat 49-year-old Eddie McCormack 1UP after he fell 1DOWN through 15 to the 2010 finalist. McCormack showed there was life in the old dog yet and held a 15-foot putt for par on the 18th to force the issue, but Egan tapped in for his par to keep his dream alive.