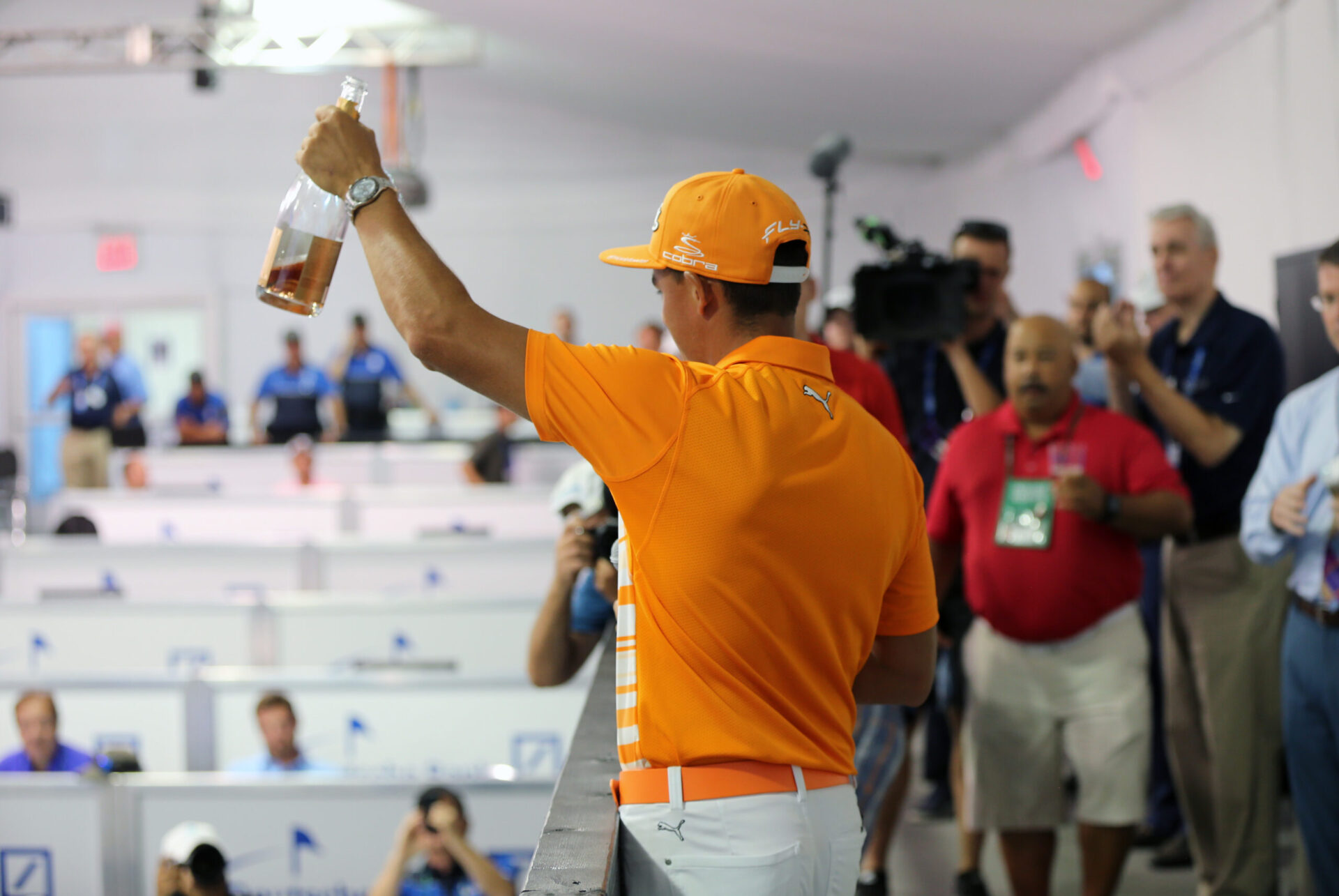 It is almost unheard of that when a top-ranked golfer wins a golf tournament he goes out of his way to arrange for a dozen bottles of bubbly to be delivered to the press room.

This has been the practice each time Rickie Fowler has won either on the PGA Tour or the now DP World Tour, and with Fowler, and through his manager, organising either champers or ice-cold beers for the attending media at each of his five PGA Tour wins or his pair of DP World Tour victories.

There was champagne all around when he won the 2015 Scottish Open at Gullane and also a dozen bottles arrived, to the delight of the media, no sooner after his formal winner’s conference courtesy of Fowler when he captured the 2016 Abu Dhabi HSBC Championship.

However, the victory toasts of champers and/or the beers courtesy of Fowler has dried up since the now 33-year-old last won in capturing the 2019 WM Phoenix Open.   Fowler’s win in Arizona saw him qualify later that year for the USA Presidents Cup that headed ‘Down Under’ and came out tops under the leadership of Tiger Woods.

However, Fowler’s been like the forgotten man of world golf.  He had peaked at No. 5 on the World Rankings in winning seven years ago in Scotland and went from No.9 back to No. 5 later that year in winning the Deutsche Bank Championship.   It will surprise many that one of the golden boys on the PGA Tour, and a former long-running No. 1 amateur in the world, is currently ranked 134th in the pro ranks, and is set to drop further after missing the cut at the RBC Heritage.

Fowler seemed to be every young woman’s golfing sweetheart when he and Rory McIlroy were making their professional debuts on opposite sides of ‘The Pond’.  They had played against each other in the 2007 Walker Cup at County Down, and both turned pro late in 2007.  And like McIlroy, they quickly earned their full tour card, Fowler finishing joint runner-up in only his second event, while McIlroy wrapped up his 2010 card with a third place finish in his third full pro event at the 2009 Dunhill Links.

Fowler and McIlroy became good friends, and they still are.  It did take Fowler a little long, in fact over two years longer, to capture his first event late in 2011 at the Kolon Korea Open.  We then had that great showdown seven months later in suburban Charlotte with Fowler denying both McIlroy and D.A. Points to capture his maiden PGA Tour win at the Wells Fargo Championship.

Major championship-wise Fowler’s played in 46 majors with an impressive record with three second-place finishes – T2nd in the 2014 US Open, T2nd behind McIlroy at the 2014 Open Championship, and second a year later at the Masters, losing by a stroke to Patrick Reed

Fowler also has enjoyed nine other top-10s at the game’s highest level including clearly his best year in the majors, and that being 2014 when he was T5th in the Masters and after sharing second twice in the next two majors, he rounded off a most successful year share third in the PGA Championship.  They were results that had Fowler ear-marked to soon become a Major Champion.

🚨 BREAKING: Rickie Fowler files an entry for the US Open Monday Qualifier. This will take place the Monday after the Memorial (June 6th)

It will be a 36 hole qualifiers event held at Kinsale Golf and Fitness Club & Wedgewood Golf and Country Club in Columbus, Ohio. pic.twitter.com/xmh3v0lIni

Fowler did finish in a tie for eighth at last year’s PGA Championship, and while now being ranked well outside the top-100, it will mean a tee-time mid next month at Southern Hills but, at this stage, it also not see Fowler in attendance for the 150th Open at St. Andrews, and having made his Open Championship debut in 2005 Open at the Home of Golf.

There have been plenty of stories written in the past few years on Rickie Fowler with obvious headlines such as – ‘What Happened to Rickie Fowler?’ or ‘What’s Wrong with Rickie Fowler?’  However, golf fans miss a more positive Rickie Fowler storyline. TV misses Rickie Fowler and no doubt his sponsors want to see more of Rickie Fowler.  Though in saying that there was an ‘in house’ joke circulating there a while back that suggested Fowler had more sponsors than victory toasts enjoying contracts with Cobra/Puma, his popular TV ads for Farmers Insurance, Grant Thornton, TaylorMade, Rocket Mortgage, and Mercedes.

Fowler’s a very handsome young man and that has always made him marketable but there was a biting comment back in 2017 when Butch Harmon, and Fowler’s now-former swing coach, spoke on SKY Sports saying: “We had a big conversation at the end of the year last year (2016), and he (Fowler) didn’t like it.  “I said, ‘You gotta decide, are you going to be a Kardashian or are you going to be a golf pro?’”

Fowler, now married and the father of a five-month daughter, revealed at this year’s Honda Classic, an event he won in 2017, he’s spoken to good friend Jordan Spieth, who went through a similar career dip, and how he’s striving to get back to his best.

“Jordan and I talk all the time about it”, said Fowler in reference to the dip in their careers.  “Jordan and I stay in houses a lot together on the Tour, and the same with Patrick Cantlay, as well, Dufner.  We all talked about different stuff and how guys are doing, especially when Jordan was coming out of his dip and I was going into mine.

“It’s part of golf.  In a way, it’s part of life, as well.  Everyone that’s played at a high level has gone through the ups and downs.  There’s no one that’s ever stayed at the top.  It’s part of it.

“I’m clawing my way out.  I would have liked for it to have happened a little sooner than it has.  But being there with your friends that have gone through it or are going through it together, I know they have my back.  I’ve always had their back.  It makes it a lot easier when you have people on your side”.

Positive words from Fowler and great to read, as seeing his name atop of leaderboards is missed, and I am sure I can speak for my journalist colleagues, we also miss that glass or two of champagne when Rickie wins.

It would be unfair in writing about Fowler presenting champagne to the media each time he wins, as Graeme McDowell will always celebrate St. Patrick’s Day with the media by ensuring there are plenty of ice-cold cans of his own G Mac lager on hand in the media center, no matter what the tournament, on the special Irish day.