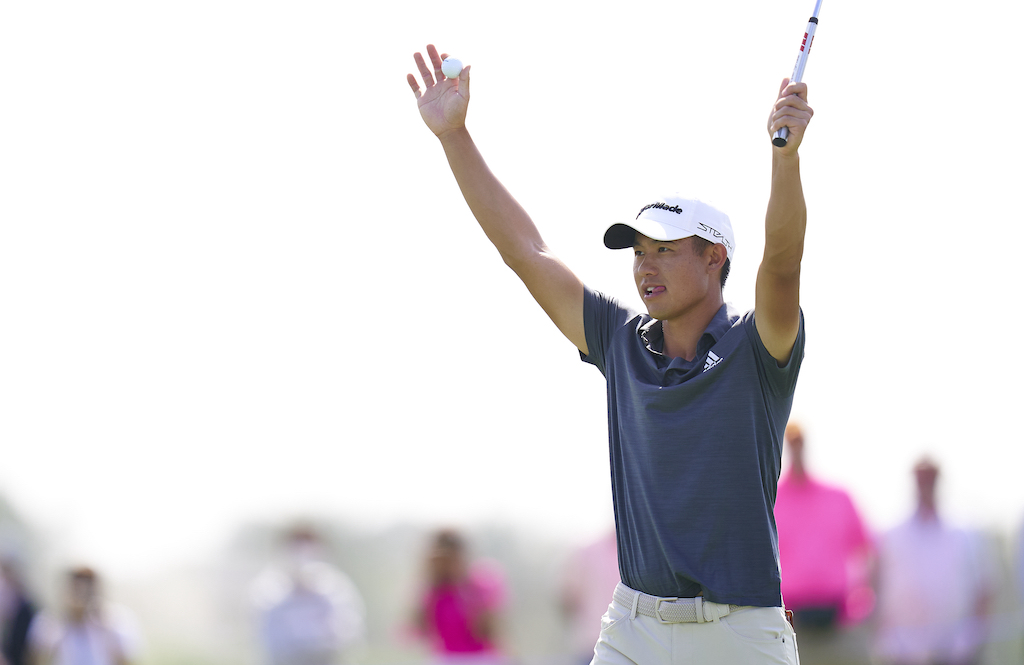 The duo were out early, like so many others in the 86th Masters field, before the threat of rain forced officials to again close the course and have patrons leave the premises.

Lyle,  who won the 1985 Open and 1988 Masters, is celebrating his 41st Masters however he has missed the cut in 10 of his past 12 Augusta appearances, including the last seven.

At 64-years old, the Balqhuidder golfer is at odds of 5000-1 to be fitted with a second Masters green jacket, though that was not on his mind in ‘bumping into’ Morikawa one of the favourites to win a third different major in three years.

Lyle said:  “I went out onto the course just to have a walk around really, not maybe to play every hole for nine holes.  So, I went across to the 3rd because I thought the 3rd hole with the new swale at the back of the green, and then Collin was in front there. So, we ended up teaming up together because we had four balls in front and four balls behind us.

“It was good. I enjoyed watching him play. I’ve seen him on TV enough times but never got to meet the guy. It was good”.

Naturally, with both now being Open Champions, and each winning golf’s oldest major at Royal St. George’s,  there were no prizes for guessing what was a topic of discussion.

Lyle said: “Yes, I talked to him about the Open Championship at St. Andrews coming up because he’s obviously an Open winner. I said this year is a very special year.

“He kind of goes, why? It’s just another Open. I said it’s the 150th anniversary of the belt.

“It turned into a little bit of a history lesson I gave to him because the belt used to be played as The Open Championship. Tom Morris Jr. won it three years in a row, so back in 1860-something, they gave him the belt, and then they had nothing to play for in 1871. Hence why we play for the Claret Jug now.

“I said to Collin if anybody comes up to you panicking, saying we need to present you with a British Open Belt after you’ve had the Claret Jug, at least you know what it’s all about because I got caught that way as well. These people from Prestwick Golf Club want to give you a belt.

“The thing is you can’t you say to them I’m busy? So that was a little history lesson, so he enjoyed that”.

It wasn’t all history though, with Morikawa keen also to learn off Lyle, who made his Masters debut in 1980 some 17-years before Morikawa was born.

Lyle said: “I pointed out that the fringes around here are a little bit easier, they’re firmer. First bounce, the ball’s releasing, which we never do before. It’s always known as the sticky fringes.

“I played quite a few chip shots around the edge of the green. Normally I would use a blade or a 5-wood or something or a 3-iron all the time. Never thought about trying to chip it into the bank.

“This year though I’ve found, especially the fringes are releasing when it hits the fringe, and then you get some sort of control with it, probably better than my blade shot, which is unusual. So that’s a little different from previous years, so not quite the usual sticky fringes that we’re used to using, or I’m used to using.

“That’s really the main thing I could say to Collin. The course is playing as long as it needs to be, way too long for me. But the big boys can turn these par-5s into reachable in two. That’s a big difference. They’re hitting it 40, 50 yards way past my drives.

“So, I’ll have to do a Langer and work away at it and sneak in under the radar. Hopefully at the end of the week, hopefully on Sunday, I’ll have a nice week”.

And Morikawa, who later attended the Masters media centre for a formal interview, was asked about how much he enjoyed getting a ‘history lesson’ from the champion Scot.

“Sandy was great and he told just about everything, including how he won the Open also at Royal St. Georges”, said Morikawa.  “There’s this Open Championship belt that I had no clue was a thing that apparently they give out to a couple of champions here and there, and he said it would be a special one to win next year or this year.

“It was small talk but I’ve never met him. He’s an awesome guy. I asked him how many Masters he’s played in, and it’s quite a few”.

So Collin?  What was the best advice Sandy offered you?

“For me, the best advice was to just kind of go out and have a good time. That’s why I was kind of out there by myself. I just wanted to get focused and just get ready for tomorrow”.

Lyle tees up in the 17th group of the day at 4.18 pm (UK time) with 30-year old American amateur Stewart Hagestad and is contesting a second Masters thanks to his win last year in the US Mid-Amateur.