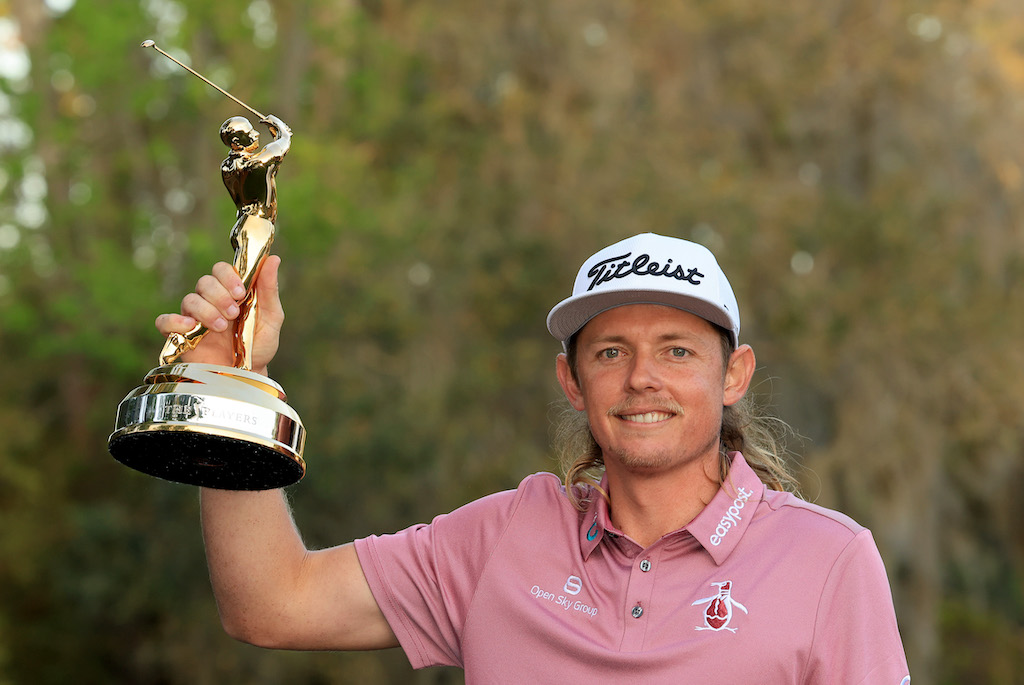 Australia’s ‘Southern Cross’ flag was flying atop of the mast for the sixth time after Cameron Smith’s anxious but stunning final round for victory at the Players Championship at Ponte Vedra, Florida.

Smith, 28, posted 10 sensational birdies and none better than his effort at the infamous par-3 17th but then horribly found the water at the last after chipping-out from trees down the right side of the fairway before getting away with a bogey and winning by a shot with a closing 66 for a 13-under-par total after five days on the TPC Sawgrass course.

The golfer with the ‘Mullet’ haircut secured easily the biggest win of his professional career to pocket the whopping $US 3.5m first prize cheque, and also collect a second win this season after posting a record-setting 34-under-par victory tally to toast victory in the first week of January at the Sentry Tournament of Champions.

Queensland-born Smith, who now resides locally in Ponte Vedra and calls TPC Sawgrass his home course, was cheered by his mother, Sharon, and sister Mel, who he had not seen in some two-and-a-half years due to Covid-19 lockdown measures in his native Australia. And it was an emotional Smith in singling out his family.

“Yeah, I mean, I haven’t seen them in two years. It’s really cool to have them here. My main priority really was just to hang out with them and golf was second for these few weeks,” he said.

“It’s nice to see them and nice to get a win for them.”

Smith came from two strokes back at the start of the final round, storming into the lead thanks to four straight birdies, to open up a two-shot cushion over the third-round leader, Anirban Lahiri of India.  And when Smith birdied the sixth, it seemed a matter of how many shots the current World No. 10 would win by.

However, three bogeys in as many holes and Smith was now back tied for the lead on nine-under as he headed to the home stretch and halting the hurt when he chipped to some 10 inches at the 10th for the first of four inward birdies in succession.

Smith pulled off the ‘shot of his tournament’ as the famed par-3 17th, where his tee shot safely cleared the water but extremely close to the water on the right side of the green with the ball coming to rest just four feet and four inches from the hole.

“I mean, on 17 I hit a really good shot. The wind didn’t quite hit it as much as I thought it was going to. Kind of left it alone there for a long time and just kind of helped me out there at the end,” he said.

The Aussie’s 10th birdie of his round saw Smith heading to the last again leading by two but for Smith to send his drive way right into the trees with no option, and still 171-yards to the hole, but to chip out. However, adrenalin must have got the better of Smith as he sent the ball 115-yards into the water.

The incident immediately rekindled memories of fellow Aussie Adam Scott doing the same, when Scott put his second shot into the water just left of the green but managed to salvage a bogey and deny Padraig Harrington by a shot at the 2004 Players Championship. Smith did the same, brilliantly chipping his fourth to three feet for a bogey ‘5’.

“No, I thought the shot was actually going to come out quite soft because it was in amongst some pine straw, and it actually came out really nice,” he said

“Definitely I was trying to hit it probably 30 yards less of that. I just thought it was going to come out tumbling and just roll out onto the fairway. Yeah, but just kind of came out nice, and it was unfortunate, but held it together. And great up-and-down.”

Lahiri in the final group now needed to birdie the last to force a play-off but alas it was not to be, and despite a gutsy chip shot from the front of the green that stopped just 13-inches from the hole to hand the Indian golfer a 69 and his result on the PGA Tour, but when the entire Indian nation was wanting just a second PGA Tour victory for the cricket-loving nation.

After all the rain and wind related delays, Smith emerged on top and in the process earning a five-year Tour exemption and also moving to a career high of No. 6 in the world.]

“I feel as though I’m playing the best that I’ve ever played. It’s kind of weird to think like that, being kind of the — probably the last three or four years being the guy that kind of goes from 20th to 40th in the World Rankings, and then all of a sudden to be 6th is kind of weird,” he said.

The affable 34-year-old Lahiri, who has won 18 times in his pro career but still not on golf’s biggest stage, was gracious in defeat.

“Actually, I’m surprised how calm I was, to be honest. Like I said, I was just happy I was in a really good frame of mind. Just stuck to my processes and routines,” he said.

“Of course, of course. I want to win. I’ve been here seven years; haven’t gotten over the line yet. That’s definitely a monkey I want to get off my back. Today was as good an opportunity as any. I guess at one point on 16 I thought it was kind of out of reach, but then again, birdieing 17, Cam kind of opened the door.

“But I gave it a good go. Made some mistakes today that I could have avoided, but that’s golf. I picked up a few shots, too, so I’m happy.

“This is a really positive week for me going forward.”