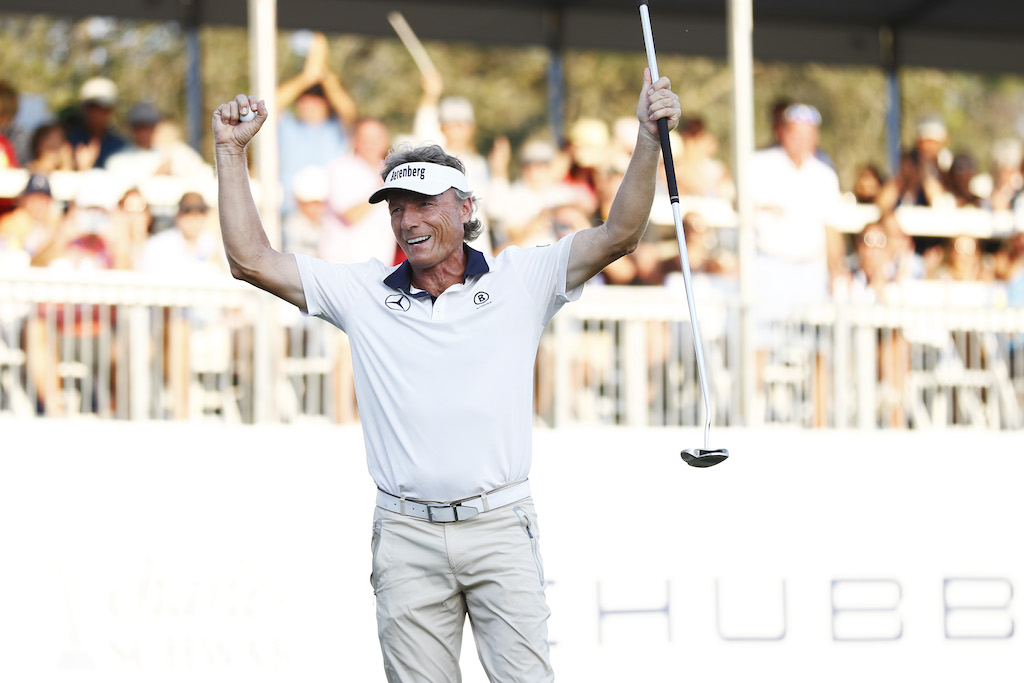 The evergreen Bernhard Langer cruised to a pillar to post victory at the Chubb Classic, collecting a Champions Tour title for a 16th straight season and narrowing the gap on all-time record holder, Hale Irwin.

Langer won at 64 years, 5 months, 23 days to push his victory total to 43 on the Champions Tour, two behind Irwin’s record haul. The German signed for a pair of weekend 68s that followed an opening 64 for a comfortable three shot win at 16-under par on Tiburon Golf Club’s Black Course.

“Yeah, I’m getting closer now,” Langer said when asked about Irwin’s record mark. “Years ago I thought, Yeah, well, that’s almost impossible to reach that. Looking back now, I’ve lost a bunch of playoffs the last three or four years. If I had won a couple of those I would be right there.

“So not complaining. I’m just saying it would’ve been possible and creeping closer, but it’s got to happen fairly soon. I can’t wait two or three years. I got to do it fairly soon.”

Asked for the secret to his longevity in this his 50th year as a professional, Langer put his success down to the team around him, and the man above.

“I guess I have good genes,” he smiled. “I’m a very competitive person and so I love to compete. I work hard at it, as you all know. I spent a lot of time practicing and trying to figure out the game.

“I was blessed with a good family. Had a great coach with Willy Hoffman who just passed away about a month ago. So that was very sad for me after 48 years or something with him.

“And so I got good people around me. Got a great caddie. Got a good team. But in the end and most of all, He’s my greatest helper. He gives me strength and endurance and the belief and puts it all in perspective.

“So when I think sometimes golf becomes too important for me, just looking up puts it all in perspective. There is far more important things. It’s not life and death down here. It’s nice to win, but, hey, if somebody else wins, kudos to them. Life goes on, and few weeks from now nobody might remember anyway.

“That’s the true reality. So that keeps me grounded and keeps me striving to become a better person. So I rambled on a lot. I don’t know what the answer is exactly. It’s somewhere in the middle of all that.

“But being grounded and having faith in Jesus Christ and working hard with the gifts and talents I’ve been given, I think that’s really the answer.”

It was a disappointing week for Padraig Harrington and Darren Clarke with the Irish pair languishing down the board and outside the top-50 at five-over and six-over par respectively.