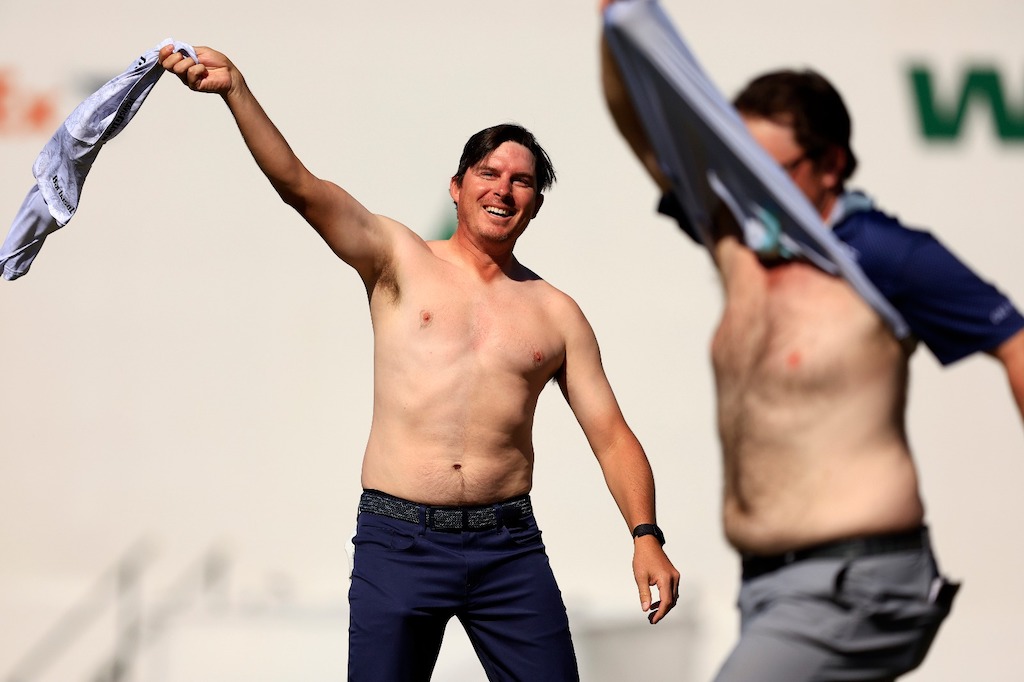 American golfer Joel Dahmen has tossed out an invitation or should we say, taken off his shirt, in seeking Rory McIlroy to be his partner for this year’s Zurich Classic of New Orleans event.

Yes, the current World No. 98 ranked Dahmen is seeking the four-time major winning and World No. 5 ranked McIlroy to be his partner for the April 21st commencing tournament on the alligator-infested TPC Louisiana course.

Dahmen went onto his Twitter account soon after going ‘shirtless’ in the final round of last Sunday’s concluding ‘who can throw the most beer cans or bottles onto the 16th hole’ at the WM Phoenix Open.

Dahmen and playing partner Harry Higgs each exposed the upper half of their Lilly white bodies after they had putted out for par at ‘The Coliseum’ hole. While Higgs just raised his shirt up to his neck, the 34-year-old Washington State-born Dahmen made a Premier League impression waving his shirt about to mimic a helicopter.

Then on Monday Dahmen,  the reigning Corales Puntacana champ, fired off his Tweet formally inviting McIlroy to be his Zurich Classic partner: “Hey @McIlroyRory. @Zurich_Classic partners? I promise to keep my shirt on!”

It led one to immediately wonder if the invitation was in reference to @TOURMISS exclusive Twitter pic of McIlroy’s torn shirt after letting slip victory at the 2021 season-ending DP World Tour Championship.

Well, it’s a nice try Joel but we don’t see Rory waving his shirt about with sheer delight declaring: “Yes, I’d love to!”. No, the Northern Irishman has never contested the event that since 2017 has been a team event but worth a try. Dahmen’s caddie, Geno Bonnalie is one such guy certainly holding out hope:

“I really hope Rory is like the pretty girl at school that everyone is too afraid to ask to the dance,” he wrote. “Maybe this is just what he’s been hoping for.”