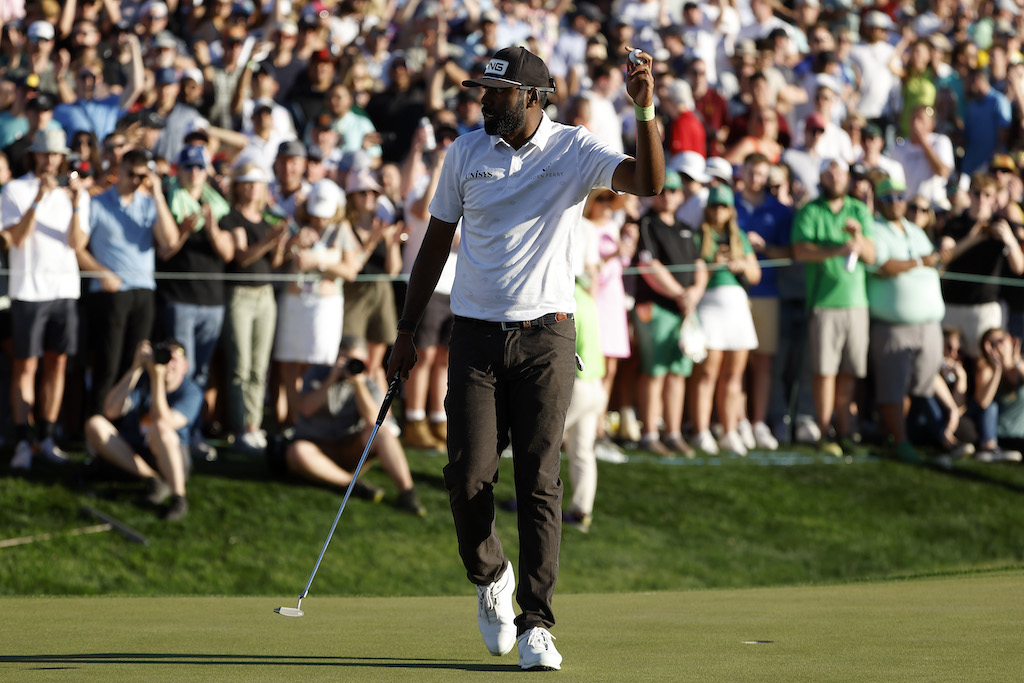 Sponsor’s invite Sahith Theegala will take a one-shot lead into the final round of the Waste Management Phoenix Open after bouncing back from a rough start at TPC Scottsdale in Saturday’s third round, although his thunder was stolen by Sam Ryder’s amazing hole-in-one at the 16th.

Theegala took a two-shot lead into the weekend but double-bogeyed his second hole and dropped behind Brooks Koepka and Xander Schauffele, but rallied for five birdies and only one more bogey in a two-under 69 that has him at 14-under, one clear of defending champion Koepka.

But the moment of the day came away from the lead groups when Ryder produced the 10th ace the grandstand-enclosed 16th has ever seen, holing a 54-degree wedge from 124 yards, which delighted the crowds and saw them rain beer cans onto the green in celebration, which caused a 15-minute delay as it was cleared up.

“I don’t know how I could pick a hole over this one,” said Ryder, who only shot a level-par 71 and is eight strokes behind Theegala at six-under. “I don’t think there’s any hole that has the electricity that this one has.

“It just ended up being a perfect 54-degree wedge. Everything always plays a little shorter in there, adrenaline or whatever it is.”

That preceded more drama – although without an ace – at the top of the leaderboard as Theegala looked to buckle under the pressure early when he hit the lip of a fairway bunker on the second on his way to the double, dropping him out of the lead.

But the 24-year-old – the only player ever to win all three major college awards after standing out for Pepperdine University – produced birdies at the sixth, seventh and ninth, all from within eight feet, to steady himself by the turn.

A bogey on the 11th was fortunate that it wasn’t worse as he narrowly missed the water hazard with his approach, but he finished strongly with birdies on 13 and then a nice 15-footer on 17, with an outstanding par save from over the back of the green at 18 maintaining his advantage heading into day four.

“What a day. So many ups and downs. I mean, it was wild,” said Theegala, who is trying to become the first sponsor’s exemption to win on Tour since Martin Laird at the 2020 Shriners Children’s Open.

“Obviously I had a really bad start and proud of the way I fought back there. But still trying to take it all in. There’s just so much going on there, too, which is a good thing. I really enjoyed the fans out there.”

Behind him, four-time Major champion Koepka had a wild ride of it himself in his third round, holding a share of the lead after birdieing the third but then adding three bogeys around five more birdies in a three-under 68 that moved him up to 13-under.

“I’m playing solid, so just go out and go play a good round tomorrow and see what happens. Just need to keep putting it the way I did. I feel confident. I like where my game’s at, and we’ll see,” said Koepka.

Schauffele stumbled after leading at the turn, finding the water at the par-four 11th to eventually take a double-bogey, although five birdies alongside a bogey in the rest of his round led to a two-under 69 that has him in a share of third at 12-under.

That has him tied with Patrick Cantlay, Talor Gooch and, most impressively, Scottie Scheffler, who flirted with a sub-60 round but eventually settled for a still outstanding nine-birdie, bogey-free 62 which saw him take only 29 shots on his inward nine.