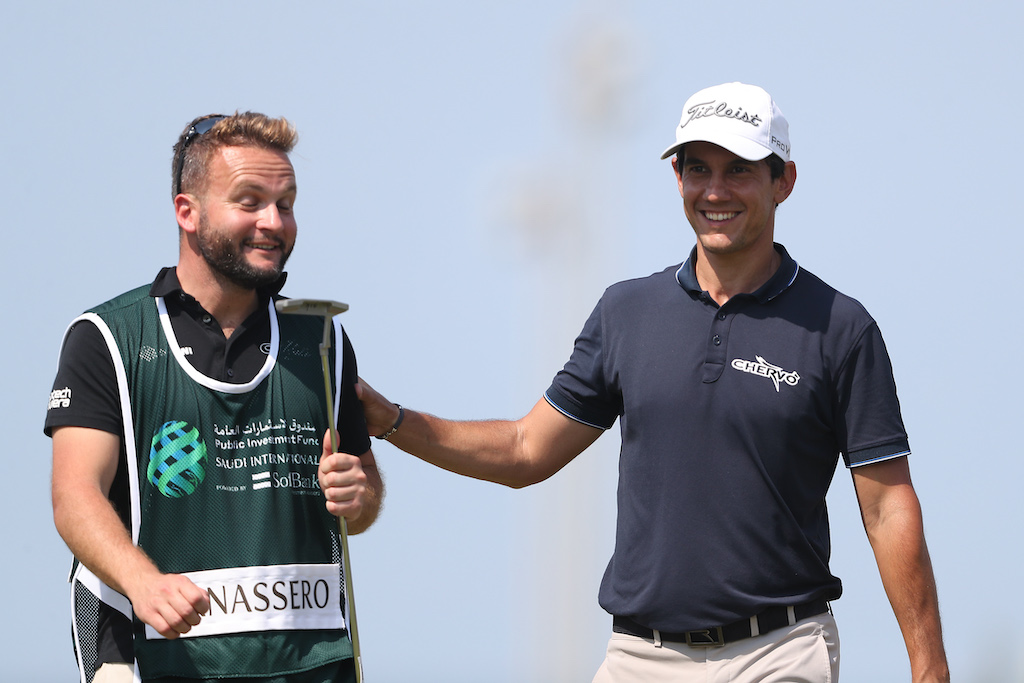 Matteo Manassero is all smiles (Photo by Oisin Keniry/Getty Images)

The sight of Matteo Manassero’s name atop the leaderboard on day one of the Saudi International brings back many fond memories of this most affable of Italian golfers.

Manassero’s eight-under-par 62 matches a career-low for the now 28-year-old Verona-born golfer, a score he first shot in the final round in securing a share of second in the 2010 co-sanctioned UBS Hong Kong Open.

His bogey-free score along the Red Sea shoreline was capped by five birdies from the seventh to 12th holes on the host Royal Greens course to hand Manassero a two-shot lead in the inaugural Asian Tour event.

“It’s a great start to my week, absolutely,” Manassero said. “It was one of those days in which everything was going my way. I was playing really solid, giving myself a lot of early chances. A lot of really short ones as well. So just got going and you know, just felt comfortable. That’s the right word. I guess.”

However, for the golfer with the dashing movie-star looks, his efforts continue to sound a return to those days of early the last decade when Manassero was the European Tour’s teenage darling.

He turned pro on 3 May 2010, making his play-for-pay debut naturally at the Italian Open. ‘Manny’ then became the youngest winner of the European Tour winning later that year at the Castello Masters in Spain. Along with his second place in Hong Kong, it earned him the award of 2010 European Tour ‘Rookie of the Year’.

Winning the 2011 Maybank Malaysian Open saw him, at the age of 17 years and 363 days, both the first and second on the list of youngest European Tour winners.

He then captured the 2012 Barclays Singapore Open to become the first teenager to win three times on the European Tour.   A year later, Manassero endeared himself to everyone, winning at European Tour HQ with a play-off victory at the BMW PGA Championship.  The win not only saw him reach a World Ranking high of No. 28 but also help send Manassero to the 2013 US Open.

Since then it has been a ‘whatever happened to Matteo Manassero’ scenario plummeting to 1,705th on the rankings in missing the cut in 2020 at the Challenge’s Tour Euram Open.

It was two months later when those that closely followed golf noticed Manassero won on the Alps Tour, thus ending a long seven-year winless drought.  Then last year, Manassero also began showing signs of the form that made him the European Tour’s darling with two seconds early in 2021 on the Alps Tour and also three top-10s on the Challenge Tour.

‘Manny’ singled out two people pivotal in helping get back to those heady days when he was breaking Tour records.

“James Ridyard is my coach on technical stuff and the mental side, it is an Italian lady called Alessandra Averna”, he said. “She helped me a lot as well on what we were talking before…like attitude. We did as much work on the technical side as we did it on training the mind.”

Manassero had to seek an invitation to tee-up this week in Saudi Arabia, and he grabbed it with both hands.

“Times were difficult for me because you kind of get to a point in which you know you’re talented, everybody tells you that, but you don’t really believe it. What you see is not very good. And when you feel is worse. So yeah, hard. You kind of have to take a point from where you start from zero and you get comfortable with the new people you work with. You create something, and that definitely helped me a lot.

“I came here also curious to see how I was gonna be and I was ready to just take whatever was coming, which is a different mindset than say 2-3-4 years ago, in which there was more anxiety before. Somehow, your mind, your body knows that it is going to be a struggle.

“Now, I’ve got my own things I can go back to work and relate on the golf course and, and basically, I have plans, which helps me a lot in a good round, or in a bad round.”

For a person and a player like Manassero, you can only wish a return to the best.

Manassero had been so engaging when I reported on his victory in Spain and on all the occasions in the ensuing 12-years or so, that I would bump into him, he has never changed, sporting a smile and a greeting of ‘Buongiorno’.

As for the Irish making the trip, Shane Lowry was the best of them, carding a two-under 68 to sit in a tie for 32nd overnight. Graeme McDowell (+3) and Cormac Sharvin (+4) have a job on their hands to make the weekend cut.