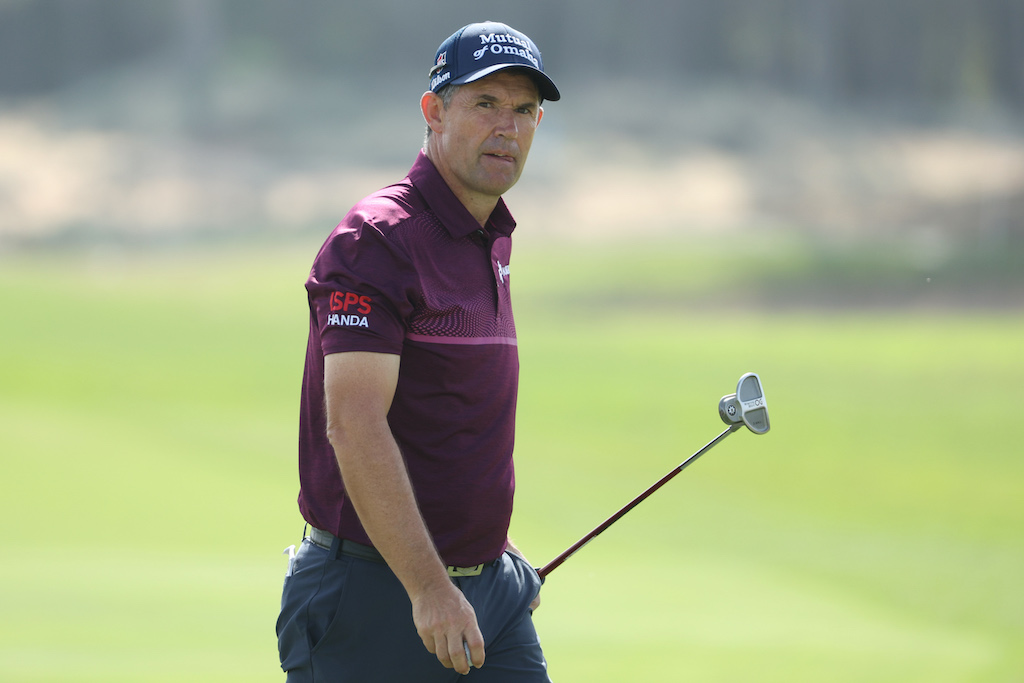 Padraig Harrington maintained his recent form with a strong finish to his first round at the Ras al Khaimah Championship to end the day as the best of the Irish in the United Arab Emirates.

The former European Ryder Cup captain carded an eagle, three birdies and two bogeys in a three-under 69 in his opening round at Al Hamra Golf Club and is four shots back of leaders Sebastian Heisele and Scott Jamieson.

Northern Irish pair Jonathan Caldwell and Tom McKibbin are two shots further back of Harrington after both started with 71s, which has them on the projected cut mark as it stands.

Harrington has been in excellent form since the tail end of last season, picking up two top-10 finishes in his last four events – including at last week’s Dubai Desert Classic – since leading Europe at Whistling Straits, and he looks to still be riding that wave this week.

It is somewhat ironic to say that given how his round started, putting his opening drive on the 10th hole into the water which would eventually lead to a bogey and, after scrambling to save pars at 13 and 14, another shot fell at the par-three 15th when he failed to make up-and-down from a greenside bunker.

But a fine 16-foot putt on the 17th led to his first birdie of the day, and he carried that momentum into his back nine where he finally sparked.

A sensational approach from 226 yards to six-feet on the par-five third yielded his eagle, and he finished with a flourish with birdies at the eighth and ninth to pull himself up the leaderboard going to round two.

Meanwhile, McKibbin declared himself happy with his performance in his first DP World Tour event of the season, recording three birdies and two bogeys on his way to a one-under 71.

The Holywood man started with two birdies in his first three holes, but a three-putt bogey at the par-three fourth halted his momentum, and he needed good saves at the sixth, eighth and ninth to reach the turn in one-under.

A nice 10-foot putt led to a birdie on the 10th, but he gave it back at the 12th when he failed to get up-and-down from short of the green and would par his way in to finish with a 71.

“Yeah it was good. I played solid enough, not too many loose shots, a few just slightly off which was pretty tricky. Overall, very pleased especially with how windy it’s been,” the 19-year-old told Golf Digest, who began his year with a win in the Minor Golf League in Florida last month.

“It was different (playing with a scorecard). It was good to get back out there and play. You can play as much as you like in practice but it’s not the same. Under-par, I’ll take it.

“I saw this morning that the scores were pretty good, which was expected after the practice rounds. Our first three or four holes were fine which is what we would expect, just a little light breeze then it picked up all of a sudden and it was tough for sure.

“I had a lot of chances. But it’s just tricky in the wind, a lot of the pins are on the side where the wind was blowing your ball to, so it was quite tricky. Had to play a lot of safe shots and try to get out of a few holes with pars.

“There are straightforward holes, then a stretch of hard holes, then straight forward again, so it’s about keeping momentum, play the easy holes well and then hang on.”

Caldwell had a fairly uneventful round with just two birdies and one bogey, the Clandeboye man struggling to get any momentum going in the windy conditions at Al Hamra.

His dropped shot came at the ninth after hitting off-line from the tee and then missing the green with his third, but back-to-back birdies at the 13th and 14th got him under-par, where he would finish the day, although he will be frustrated he couldn’t convert a six-footer at the last to move to two-under.

At the top, Heisele and Jamieson lead the way as both opened with bogey-free seven-under 65s to sit one shot clear of Johannes Veerman, Brandon Stone and Thomas Detry after day one.