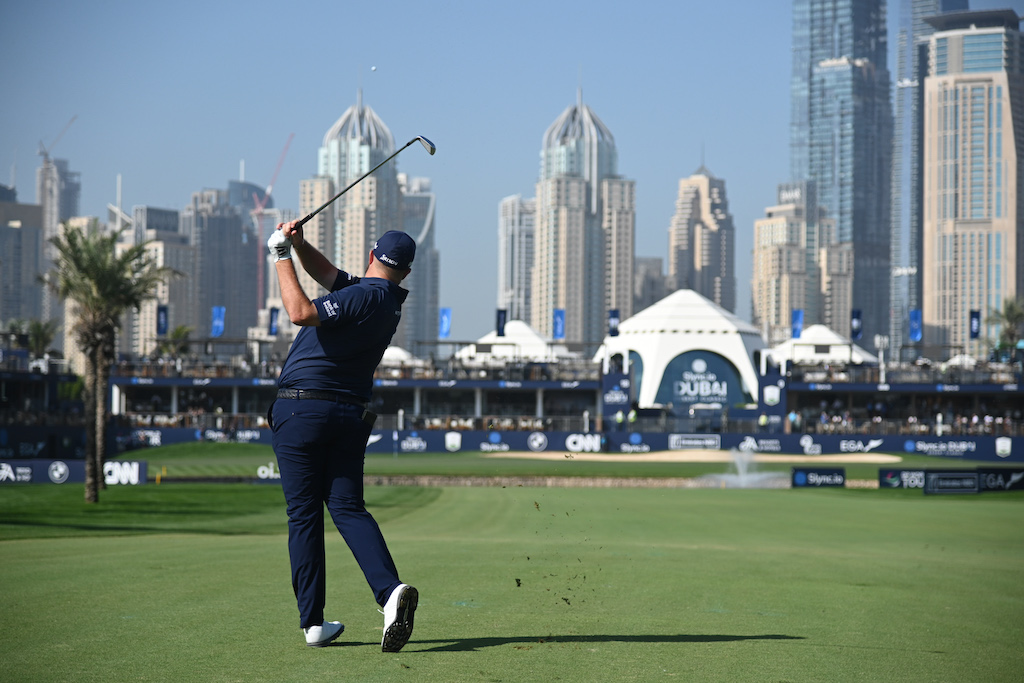 Despite a disappointing day in the office, Rory McIlroy walked the entire length of the practice putting green signing close to 100 autographs after his ‘no frills’ round of one-under-par 71 on the opening day of the Slync.io Dubai Desert Classic.

Hansen, who won the penultimate event of last year at the nearby Jumeirah Estates, leads the way by a shot from South African Justin Harding, who was on the par-5 18th green in three, and at six-under when poor light halted play in the $8m event.

European No. 1 Collin Morikawa dropped three shots over his closing four to be at four-under, while Rory McIlroy, who gave plenty of time to his fans, provided a handful of quotes to media, though it was nothing to write home about.

McIlroy first avoided the waiting media to delight his fans before much later providing a few comments on his day’s work on a course where he won for the first time in his career in 2009.

“I got away with the tee shot on 17 and then the last few holes, I feel like I bogeyed three of the easiest holes on the course in 18, 2, and 7. So, a couple of bad decisions or mental mistakes, and then maybe made a couple of bad swings in there as well.

“Overall, the course is tricky, firm greens. I thought I did most things pretty well but just need to tidy a few things up, which is where I am going right now.”

When play was halted for the day, McIlroy was sharing 46th place.

World No. 2 Collin Morikawa, who for a fourth event would go to World No. 1 with victory, had brilliantly shown the way at seven-under-par through 11 holes before he came home in a golfing ambulance bogeying three of his closing four.

“It was a disappointing finish but I’ve been working Monday through Wednesday, even into yesterday late after the Pro-Am trying to figure things out,” said Morikawa.

“When you are thinking about so much, you always have to remember to go play golf. I’m happy with 4-under. Not thrilled, but to see just some things that I’ve been working on just show up on the course was really nice.”

Shane Lowry was another who struggled having also done the hard work early, as evident to be three-under through 13 holes before bogeying his closing two holes, the eighth and ninth as they appear on the scorecard.

Lowry headed straight to the practice putting green following his round to join Morikawa who was on the green in deep discussion with his caddy, while McIlroy was signing the last of his autographs.

Padraig Harrington was as bright as the clubhouse lights after his round in birdieing two of his three closing holes to be the leading Irish golfer thanks to a two-under-par 70 in the fast fading light.

“It was a rousing finish and hard to believe as that finish came from nowhere, and it would have been nice to birdie the last,” he said.

Harrington holed out from 30-feet from off the green at the par-4 16th and then drained a six-footer on 17.

“I got the most out of my round today. Early on I missed a few chances but I stuck in there and managed to hole a few at the end though a 69 would have been good.

“The new greens are still pretty firm but you have got to hit fairways and greens, so very pleased with my day.”

Also, on one-under-par was Clandeboye’s Jonathan Caldwell and in contrast to his Irish colleagues, he was pleased in shooting one-under on his maiden Emirates course appearance.

“Delighted with a 71 as it was a pretty solid round,” said Caldwell. “There was nothing special and I was just happy with how I played, as both this week and Yas Links last week are new courses for me.

“Now looking forward to lunch that should taste pretty nice!”