Liverpool star Robertson in awe of Schwartzel during Dubai pro-am 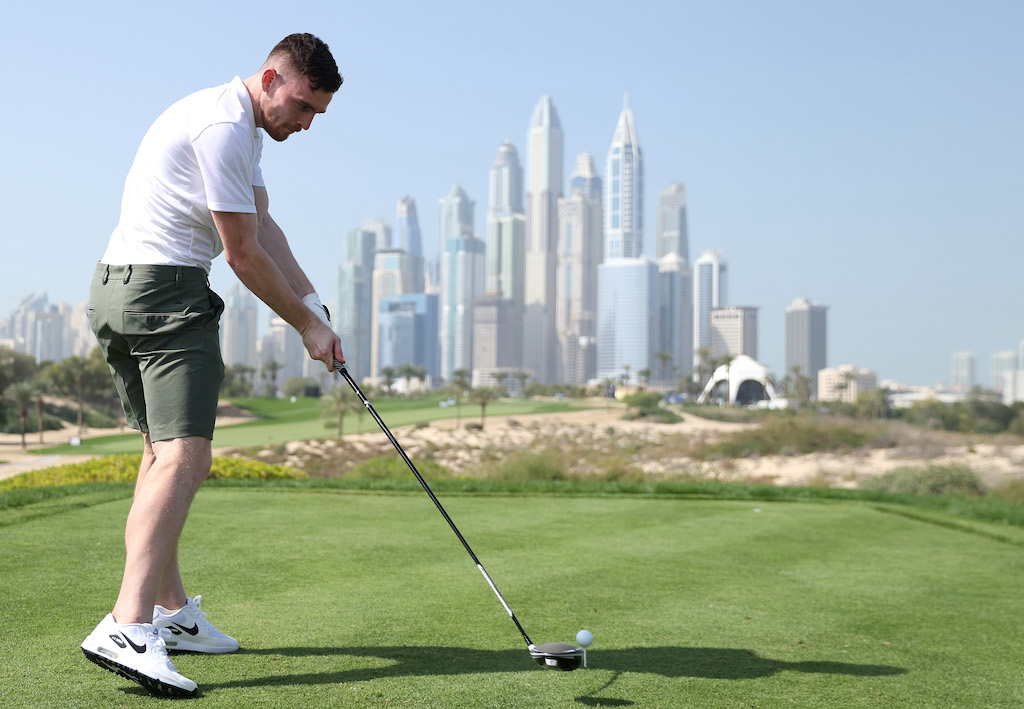 Liverpool and Scotland footballer Andy Robertson was like a kid in a candy shop getting to play with Masters champion Charles Schwartzel during Tuesday’s Pro-Am ahead of this week’s Slync.io Dubai Desert Classic.

Robertson, who plays off a single-digit handicap, was joined on the Emirates course by fellow Liverpool stars Alex Oxlade-Chamberlain and James Milner who are in the UAE on their mini Premier League winter break

Robertson, 27, had been hoping to be teamed with top-ranked Scot Robert MacIntyre but the former Queens Park and Dundee United star, and past junior captain at Cathcart Castle golf course located south of Glasgow, was delighted to play in Dubai in the company of the 2011 Augusta National champ

He said: “It’s not normal to get an opportunity like this, especially the international players as we are normally busy during any breaks.

“So, it’s nice to get out on the golf course and see how the pros go about their business and how it’s meant to be done. I had a good round this morning and enjoyed it.”

Robertson was eight-years-old when his father got him into golf at Cathcart Castle and while he’s not a member of a club, he certainly knows showed enough on the Majlis course to hold his only in any Saturday club match.

He said: “I loved my time at Cathcart Castle but now I don’t play as much as I want to or should.

“Any time I go out, I try to enjoy it and have some fun and we certainly enjoyed it this morning with Charl Schwartzel. It was incredible to watch how effortless he makes it look when I know it’s a very difficult sport.

“I’ve not been able to play with either Kenny Dalglish or Alan Hansen, but during the season I don’t really play much at all. Golf is a definite hobby for me. It’s something I enjoy. It’s a getaway from football and gives me a chance to forget about everything that happens on the football pitch.

“Golf’s a great sport and I love it. That’s why I was trying to pick up little things from Charl, but I’m not sure I’ll be able to replicate too much of it, to be honest!

“I’ve been fortunate to play courses such as Royal Birkdale and Hillside, wherever I can get a game really. Back in the day when I was younger, I tried to put a bit more pressure on myself when I was hitting golf shots, but now I just try to accept the bad ones and also the good ones.

“It allows me to switch off a bit during intense periods of football and today was certainly that.”

And despite not getting to team with MacIntyre, the Scottish FA International Honouree was full of praise for the Oban lefty.

“Bob’s an incredible young talent,” Robertson added. “He’s come through at the top level over the last couple of years and I really back him to win some top tournaments.

“I’ve watched him a couple of times on the TV, especially in The Masters, and I know how much he’s enjoying it.  We’ve obviously got a history of good, young Scottish golfers and he’s just carrying it on. Hopefully, he can win one of the big ones and I’d love him to do that.

“Obviously being a lefty, he’s incredible to watch. I actually tried to play with him in this pro-am, but it wasn’t possible due to me giving too late notice. That would have been great, but it was still too nice to meet him and I’d love to play golf as well as he does.

“Look, that’s the thing with a mid-season break, it’s a difficult one. In the summer, you can completely switch off and get yourself re-energised and re-focused.

“But my mind is still on football just now. It’s nice to have this week off and to be able to spend it with my family and chill out a bit.

“However, we are going back to a hectic period of football. The Champions League will be starting up, we’ve got the Carabao Cup Final, we’ve got the league and also Scotland games.

“So, it’s a really intense period of time for me, which means it’s important to use this week properly but also stay focused, tuned, and fit then really look forward to the last three or four months of the season as they can really be an exciting time for club and country.”

Team Schwartzel finished 19-under in the Pro-Am and tied mid-field with Team MacIntrye,  nine shots adrift of the winning team led by Kiwi Ryan Fox.