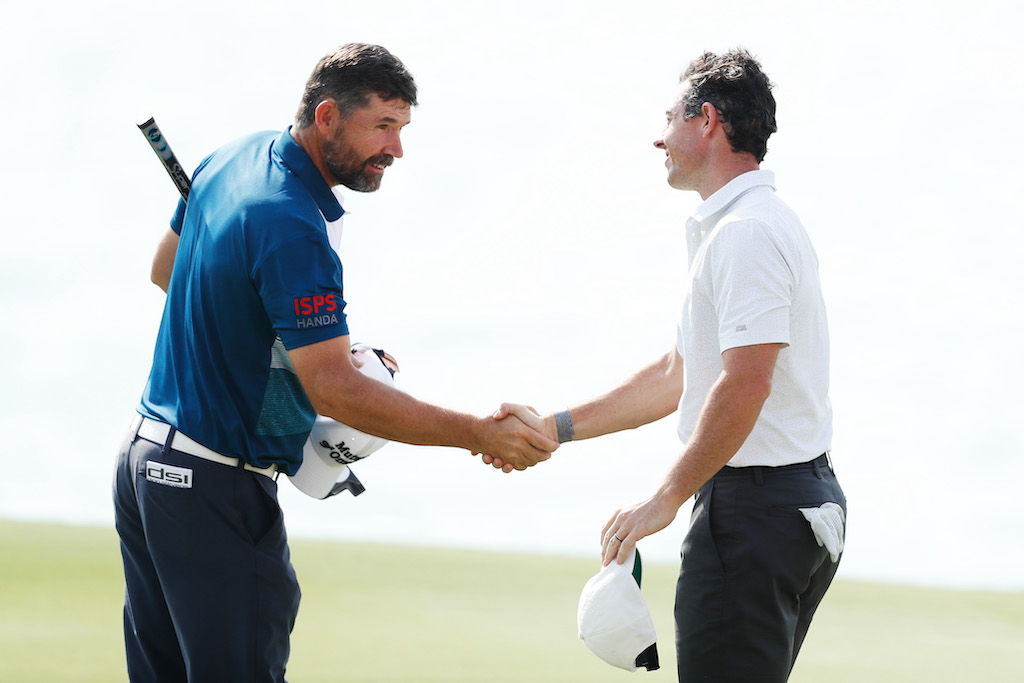 In a rather humbling assessment, Pádraig Harrington says the chasing pack has caught up to the once feared Rory McIlroy, and it’s now up to the current world number eight to resurrect the belief that could make him the game’s best player once more.

Harrington was speaking from Yas Links where he signed for a brilliant moving day four-under 68 to jump inside the top-20 at four-under par at the Abu Dhabi Championship.

Alongside Sky Sports presenter, Nick Dougherty, Harrington was asked whether there’s an urgency for McIlroy to end his Major duck, now into its eighth year after last collecting one of golf’s big four prizes at the Valhalla hosted PGA Championship in 2014.

“When he was winning, he absolutely stood on the tee and didn’t care about anybody else,” Harrington said of McIlroy’s dominance during that period.

“He knew if he played his game, he was going to win. Obviously the field has caught up. There are plenty of other big guys out there – big hitters, good drivers of the ball. The depth is stronger now.

“It’s not as easy for him to win because there’s other good players but I would suggest, to bring the best out of him, he’s just got to be comfortable with who he is and what he’s doing.

“I know myself when I was winning my Majors, it was just a process of: ‘I know I’m going to win them, maybe not this week but I’m going to be there or there abouts in X amount of majors. If I play well in three out of four majors, I’ll be in contention in two, and over two years I should surely win one or four’.

“I was so comfortable that it was my time. Rory was very much like that. You look at his performances back in the day; nobody could stay with him on the golf course.

“Yes, players can stay with him on the golf course now but he has to believe, he has to get back to that state of, ‘I’m doing my thing and if I keep doing it over and over, I might not win this week but I’m going to win plenty of them’.”

McIlroy’s next Major opportunity will arrive at the Masters in April where once again he has the chance to achieve golfing immortality and enter the Grand Slam club.

Speaking on the NoLayingUp podcast before Christmas, McIlroy was asked by host Chris Solomon if his current Major haul feels a bit like going out in 27 and playing the back nine in 33 to shoot 60, given how elusive golf’s big titles have been of late. And although there’s frustration there, McIlroy was super calm in his answer, fully convinced he’ll yet add to his tally of four.

“There’s been opportunities to win Majors [in that time],” McIlroy noted. “The Masters in 2018, I didn’t put any pressure on Patrick [Reed] that final day. Finished second at Carnoustie, had a great chance to birdie 18 to put some pressure on Francesco [Molinari]. Tied for the lead with nine-holes to go at the US Open this year at Torrey Pines – I’ve had chances, just haven’t capitalised on them.

“But then again, thinking about it, I’m 32-years old. Phil Mickelson had zero majors at this point and he went on to win six of them post-33 or 34 so I still feel like I have a really long runway ahead of me. I certainly don’t think my Major winning days are over.

“And since 2014 I’ve basically won everything there is to win in the game of golf apart from a Major Championship – WGCs, The Players, two FedEx Cups, Race to Dubai – I’ve done most other things apart from winning one of those big four so if I keep playing the way I’m playing, keeping in this mindset that I think I’ve finally got right, it’s not far away.”