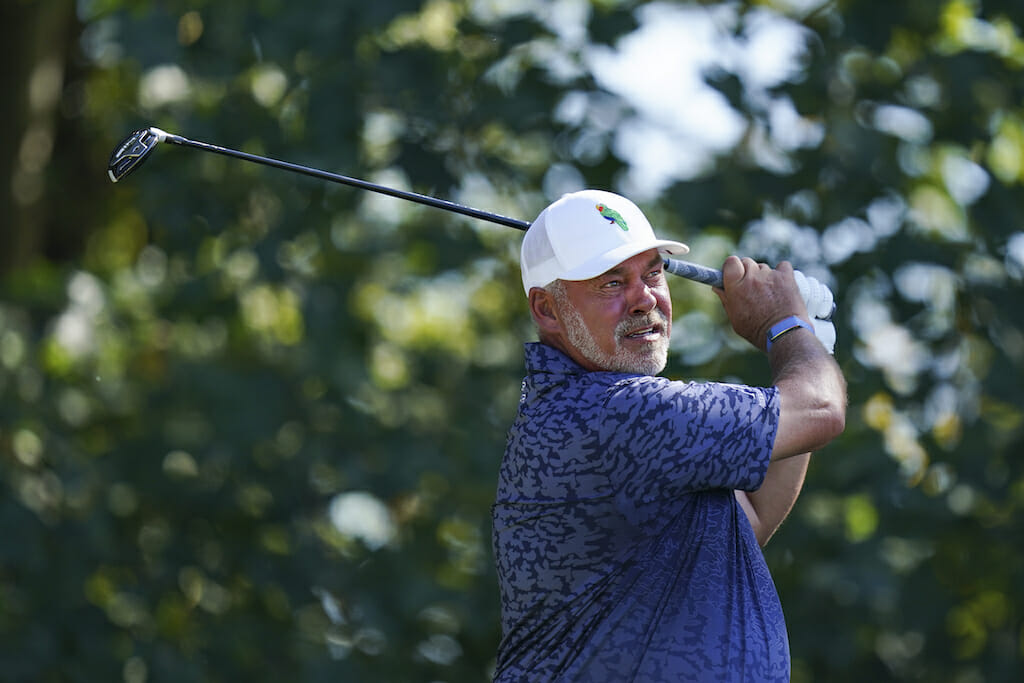 Darren Clarke sits just two shots off Ernie Els’ day one lead after opening his title defence with a six-under par 66 at the Mitsubishi Electric Championship at Hualalai.

The Dungannon man traded seven birdies with just one dropped shot to sit in a share of third overnight alongside Retief Goosen and Bernhard Langer, Stephen Ames and Steven Alker.

The 53-year old is a three-time winner on the Champions Tour and has been thriving on the over-50’s circuit, enjoying nine top-10 finishes and banking over $2 million last season.

The 2011 Open Champion is up against star-studded leaderboard with South African legend Els holding a one-shot lead over Vijay Singh after opening with a bogey-free eight-under 64.

Four of the six World Golf Hall of Fame members in the field (Els, Singh, Retief Goosen, Bernhard Langer) are T3 or better on the leaderboard after the first round.

Els produced his second-lowest round on the Champions Tour, recording six birdies and an eagle to head the field at eight-under as he goes in search of his third Champions victory. Exactly what inspired such an impressive performance out the gate in the off-season?

“I need to lose about 10 pounds, but I’m sure we can do that in the next couple weeks. I played with the guys, kept myself sharp, played a lot of golf, social golf at Turtle Creek and places around town, Bear Lakes.

“Just a great feeling coming out here. Just want to let it go out here, so it’s a good feeling to be out here.”

Another seasoned campaigner, Fijian Singh, is going in search of his fifth Tour win and he used all of his experience over the off-season too, untypically not over-extending himself on the range prior to this week’s restart.

“Okay, three or four dozen,” Singh said of how many balls he hit.

“After a couple of holes, if I’m not making a birdie, if I make a bogey or hit a bad drive, I lose it. So trying not to be that way and trying to say, hey, this is 18 holes, go out there and try the best on every shot, see what happens.”