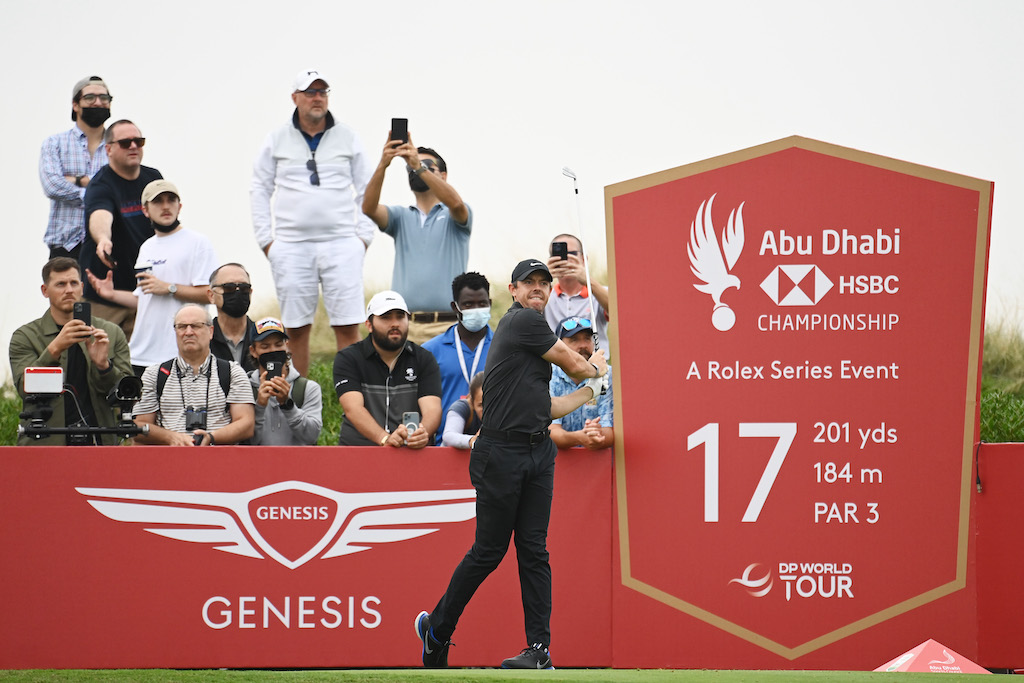 Rory McIlroy admitted he didn’t have his scoring boots on after a frustrating first round of his 15th full season at the Abu Dhabi HSBC Championship on Yas Island.

McIlroy signed off for a level par 72 in his first competitive round since his tail-of-the-field finish earlier last month at the Hero World Challenge in The Bahamas.

The World’s No. 8’s frustration was no more evident than at the last, the par-4 ninth, where his 3-wood tee shot found rough on the edge of the hole, and right on water’s edge, from where he chipped-out and then landed his third to around 12-feet.

McIlroy putted but just as the ball looked set to drop for par, it deviated from the hole with McIlroy reacting by looking skywards ahead of holing the bogey ‘5’ second putt.

Of course, it didn’t help that he had also bogeyed the par-3 eighth hole – the very first hole to be grassed back in 2010. However, and again to McIlroy’s enormous credit, he spoke to a handful of waiting media post-round.

“It was a frustrating finish to a frustrating day,” said McIlroy. “I actually felt like I hit the ball okay as I started off hitting some nice shots and I missed a few chances early.

“I struggled to read the greens, if anything, as I felt like I hit some good putts that just didn’t go in and that putt on the last was the story of the day. I felt I had started it online with good speed and it just didn’t do what I thought it was going to do.

“So, hopefully, I can start hitting good putts and they start to drop.

“Overall, I had two bad drives on the last couple of holes and apart from that, I felt like I hit the ball well off the tee, and I hit some good iron shots but just didn’t have my scoring boots on.”

McIlroy, starting from the 10th, had been two-under-par with back-to-back birdies on 13 and 14 but dropped the first shot at the 18th. He made par at the opening four holes on the scorecard before a birdie at the fifth, or his 14th of the round, ahead of finishing bogey, birdie, bogey, and bogey.

McIlroy could count on one hand the number of full practice rounds he’s played over the Festive Season break since his 18th place result in the 20-player Bahamas event and it probably showed in overcast but also noisy conditions with the sounds of Formula 3000 race cars practicing across the road on the Yas Island circuit.

“I was a little bit rusty and a little inefficient with the scoring aspects of things so yes, it’s the first day of a new season and there is still a long way to go, not just in the tournament but in the year ahead,” he said.

“It’s going to be a windy day tomorrow, so we’re not sure how the course will play and yes, I would have liked to start better it’s still a long way to go.”