Is Lefty’s self-proclaimed PIP bonanza a sign he’s made peace with Tour? 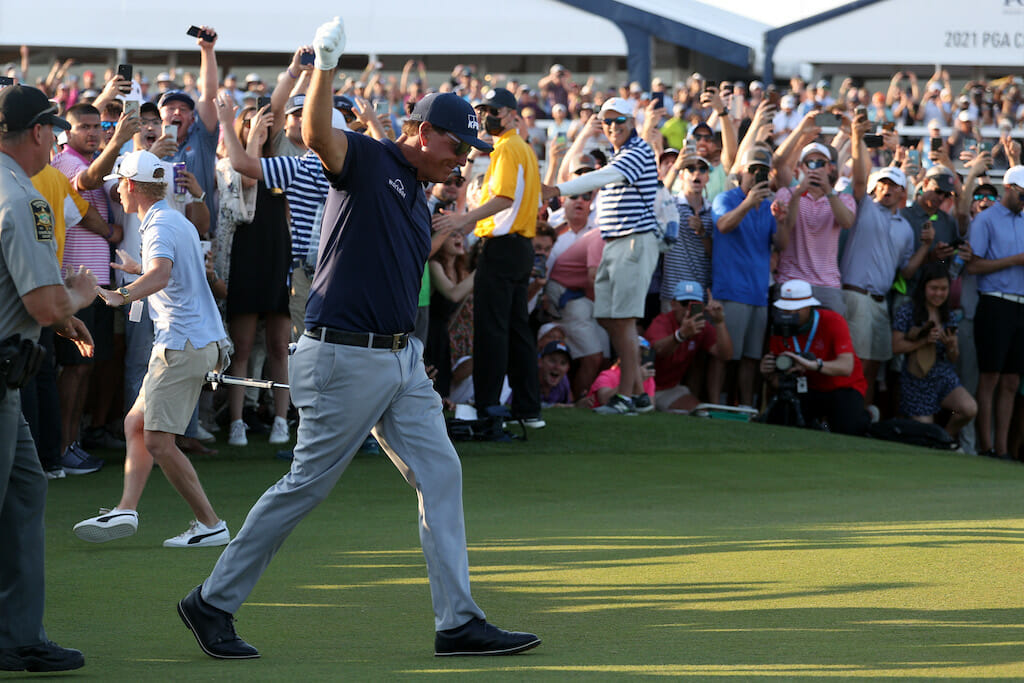 Phil Mickelson’s self-proclaimed ‘winner’ tweet of the PGA Tour’s contentious ‘PIP Program’ begs the question – has Mickelson made peace with the Tour?

Mickelson has been on a collision course with the Tour ever since 2020 when he chose to compete in the second hosting of the Saudi International, his first career showing in the Middle East.

It led to the six-time major winner being strongly linked to a breakaway Premier Golf League (PGL) and this was no more evident in noting Mickelson’s three pro-am partners ahead of the 2020 Saudi International.

Of course, at 51-years of age, Mickelson is not being targeted for his golf but maybe for the boardroom doors he could open for the breakaway league, though with suggestions of $1 billion to be invested you would have guessed the League will not be short of cash.

There was good news for Mickelson and fellow 2022 Saudi International contracted colleagues including Dustin Johnson, Brooks Koepka, Bryson DeChambeau, Bubba Watson, and the Irish duo of Graeme McDowell and Shane Lowry with the PGA Tour’s pre-Christmas gift of an official release for those players to tee-up along the Red Sea in the now Asian Tour-sanctioned event.

For the opening three events, there was seemingly no problem given it was being run by the European Tour but it’s only now and with the now renamed DP World Tour at loggerheads with the Asian Tour that contesting the event has become an issue. We still await news from the DP World Tour if their own players such as Lee Westwood and Tommy Fleetwood will be afforded a similar release to contest the 3rd to 6th February event.

Though the PGA Tour ‘release’ news did come a ‘string’ attached that those players must compete in the PGA Tour’s AT&T Pebble Beach Pro-Am, being staged in the same week at the Saudi International, at least once over the following two years, and if a (PGA Tour) player has never competed at Pebble, he would be required to play twice over the next three years.

Now we’re learning via a Mickelson tweet on December 29th he’s pocketed, what we believe, to be $8m in topping the Tour’s controversial Player Impact Program (PIP).

Mickelson tweeted: “I’d like to thank all the crazies (and real supporters too) for … Helping me win the PiP!  To get the 2nd half of the money I have to add an event. I haven’t played in a while.  See you in Kapalua.  P.S. I’ll try and find another hot controversial topic soon.”

See you in Kapalua? What’s that about as the last time Mickelson contested the Sentry Tournament of Champions was in 2001, and that’s 21-years ago, so why would he be returning? Has the PGA Tour twisted Phil’s other arm? Has the PGA Tour ‘bought’ Mickelson’s allegiance with the PIP pay-out, and do we assume ‘Lefty’ is no longer on the PGL wish-list books?

And while on the PIP,  news last April of this $40m program went over like a proverbial led balloon with immediate calls that the game’s top-10 on social media did not need their already grossly overflowing pockets stuffed with more money. There were calls also for the money to be used in boosting prize money on lesser tours under the enormous PGA Tour umbrella.

When you study the current social media tables how could Mickelson have scooped the PIP fund?  Mickelson, who only joined Twitter in 2018, is way down in 10th on the list of top-10 with the number of Twitter followers while he shares a lowly share of seventh with Instagram followers.