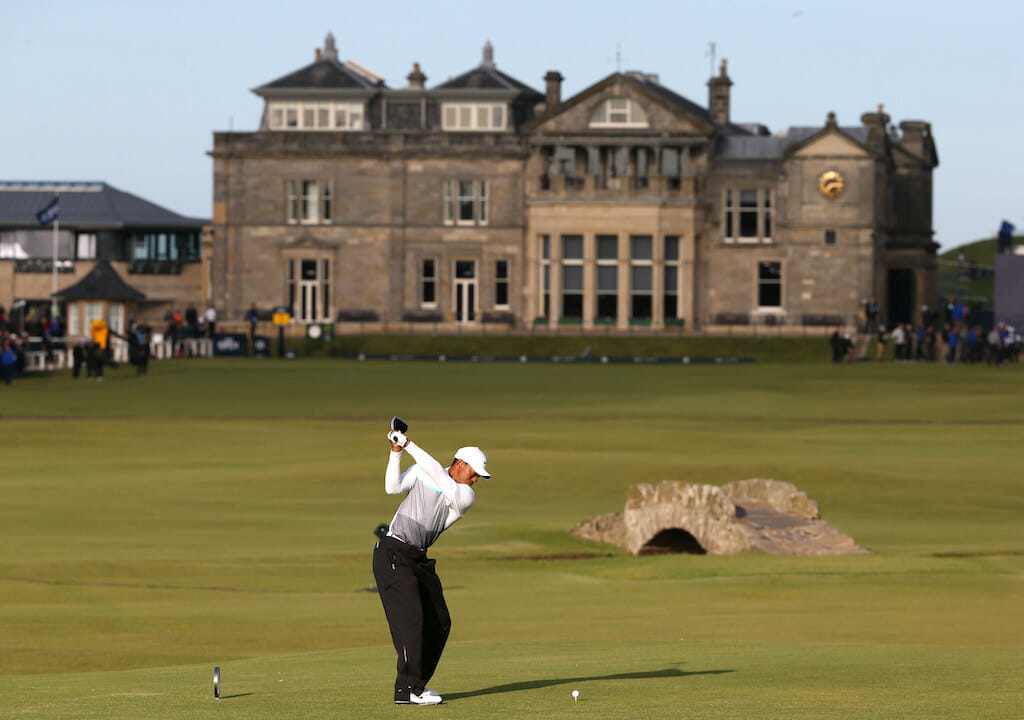 Tiger Woods at The Old Course on July 18, 2015 in St Andrews, Scotland. Image by Getty

By Bernie McGuire in the Bahamas.

If not, the 15-time major winner strongly hinted he will be present at the Home of Golf to join in the celebrations of golf’s oldest major and also attend the ‘Former Champions’ dinner held in the R&A clubhouse on the Tuesday night of every St. Andrews Open.

Woods captured two of his three Claret Jugs at the Home of Golf including his eight-shot success in 2000 and then a six-stroke victory over Scotland’s Colin Montgomerie five years later.

Woods, 45, spoke of his hopeful plans in returning to Scotland next July at a media conference ahead of this week’s Woods-hosted Hero World Challenge here in the Bahamas.

It is the first time Woods has spoken in public since February 23rd when he was lucky to escape with his life from a suburban L.A car smash.

Woods, dressed in black, arrived at the back of the on-site media centre in a white motorised golf buddy with the name ‘Privacy’ on the side of the cart, with the buggy taken from his 155-foot boat also named ‘Privacy’ that is tied-up in the nearby Albany Marina.

And he was observed walking seemingly at ease to and from the golf cart, though Woods revealed his back pain was aching as he sat through the 30-minute conference, however thoughts of being present at next year’s Open brought that characteristic huge smile to his face.

Woods said: Woods said: “Yeah, I would love to play at St. Andrews, there’s no doubt about it. It’s my favourite golf course in the world. To be a two-time Open champion there, just being a part of the champions dinner is really neat.

“From my first one in ’05 I got to attend a champions dinner, it was pretty neat to be a part of. Peter Thomson was still alive, and I sat
right next to him and to hear him tell stories of when he came over and he played and shots he played and how he did it, that was awesome.

“Those are things like at the Masters, those dinners are priceless and those stories and listen to them talk about how they played, when they played it and what they did, it’s just an honour to be a part of a room like that.

“Yes, I would love to be able to play that Open Championship, there’s no doubt about it. Physically, hopefully I can. I’ve got to get there first. Tournament’s not going to go anywhere, but I need to get there.”