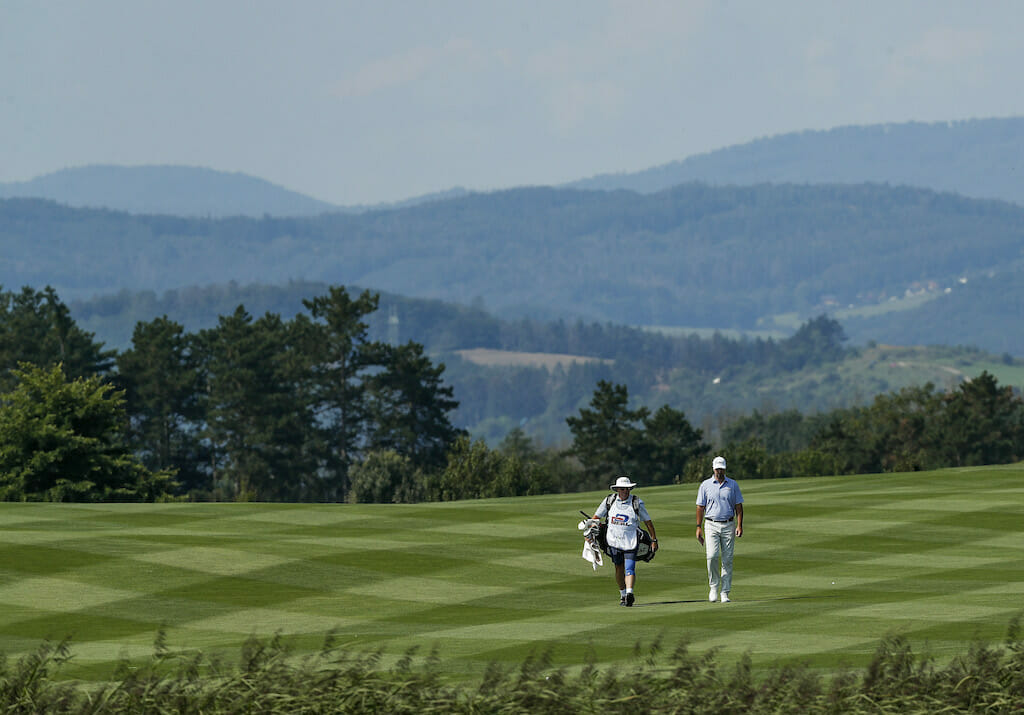 Niall Kearney with dad, Joe by his side last season in Prague, Czech Republic. (Photo by Oisin Keniry/Getty Images)

Niall Kearney makes his seasonal reappearance at Thursday’s starting Joburg Open knowing from experience that he’ll need to hit the ground running if he expects to compete in the first of three events making up the South African swing.

The Royal Dublin professional, who narrowly missed out on earning full playing privileges to the European Tour on the Race to Dubai last season, has banked entry into this week’s Randpark event but as things stand, will need a top-10 to force his way into the following week’s SA Open while he’s also currently out for the December 9th starting Alfred Dunhill Championship.

“Three weeks would be ideal,” Kearney smiled having largely been starved of game-time on the Tour of late – ultimately the reason he doesn’t hold a full card this term. Still, an improved Category 18 status should mean about 20 starts for Kearney this season; good news given he came within 12 places of the top-121 on last season’s R2D from just 15 appearances.

“South Africa is always a great place to travel to,” Kearney said, upbeat after his most successful campaign in the pro ranks to date. “I was there for a Challenge Tour event two or three years ago – I did three weeks, Limpopo, Capetown and Fancourt.

“It was a lovely stretch but it’s always a difficult place to go. The standard of golf is always really high. The Sunshine Tour is very, very strong. Lots of local guys, different grasses and they’re coming towards the end of their season whereas we’ll be just starting out our 2022 campaign which makes it difficult.”

At least there’ll be no surprises in store for the experienced campaigner who received a baptism of fire in the region when starting out his own professional journey over a decade ago.

“I remember when I first turned pro in ’09 and I got an invite down to the Joburg Open which was the start of 2010,” Kearney recalled.

“It was on in Kensington, East and West course, and I actually played really, really nice. I think I was five-under after the Thursday and Friday and I was thinking to myself, ‘perfect, first time out, this is great’.

“I think the cut went to six or seven under that week and I remember thinking, ‘Jesus, this is where it’s at!’”

Kearney’s not the only Irishman chasing a fast start in Joburg with both Paul Dunne and Cormac Sharvin in desperate need of a spark. Now ranked 1783 in the world, Dunne managed to make just three cuts from 18 starts on Tour last season as he struggled to recapture the form of his breakthrough 2017 year that included a stunning British Masters triumph.

Ardglass’ Sharvin returned a better campaign having made 10 cuts from 15 starts but his recent form has been alarming with a tied-61st result in Mallorca his best finish since a tied 44th effort in July’s Scottish Open.

Clandeboye’s Jonathan Caldwell completes the Irish line-up and he has no such concerns over starts with opportunity aplenty for the now 37-year old who plays off a winner’s category this season courtesy of his maiden success at the Scandinavian Mixed.