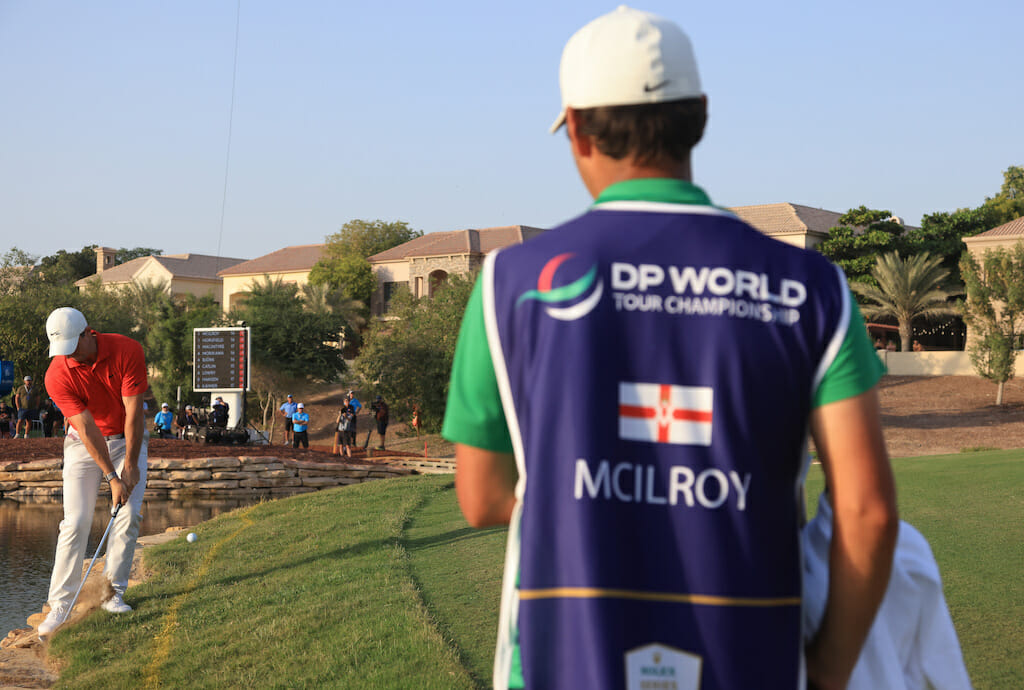 By Fatiha Betscher in Dubai

Rory McIlroy may have left caddy Harry Diamond worried but he clearly impressed certain European No. 1 Collin Morikawa with his second shot at the 17th hole on day two of the DP World Tour Championship.

McIlroy’s tee shot at the island green-like hole hit the left side of the green but kicked further left and looked headed for a watery grave before his ball bounced a couple of times on rocks and came to rest on the flat surface of one of the rocks that forms the framework in keeping the green in place.

McIlroy and Diamond deliberated on their options and with McIlroy going against his Best Man’s advice, saying afterwards: “Harry was pleading with me not to hit it, ‘Just go back, we can make four, we can make four at the last’.

McIlroy went ahead and played the shot that surely must have scratched his club and with his ball scooting across the green to stop shy of a bunker now on the right side of the green. He then chipped with his ball just missing the cup in taking a brilliant bogey ‘4’.

Morikawa, who was short right and on the green, just looked on and smiled at McIlroy in amazement.

“Rory joked that he was trying to one-up me after making a 3 on 17 after what I did yesterday,” said Morikawa. “It was a great shot and I’m sure it was a very tough shot, still almost made ‘3’”.

And it was not only Morikawa smiling as the crowd was very much on McIlroy’s side in trying to ‘will’ the par chip shot attempt into the hole.

“The crowd definitely loves the Europeans more than me, promise you that,” Morikawa said smiling. “That’s been a common theme every time I’ve come out here.  But they are great.  They still root me on.  The kids love it and it’s great to see people.”

And with a round to play, Morikawa cannot be beaten in creating European Tour history in becoming the first American to win the Race to Dubai crown but just back of McIlroy, the reigning Open Champion is targeting the DP World and No. 1 crown double

“I’m focussed on winning this tournament,” said Morikawa. “If I start worrying about what I need to beat, I’m going to end up right around them and who knows what they are going to shoot.  Try to win tomorrow.  That’s all I can think about.”