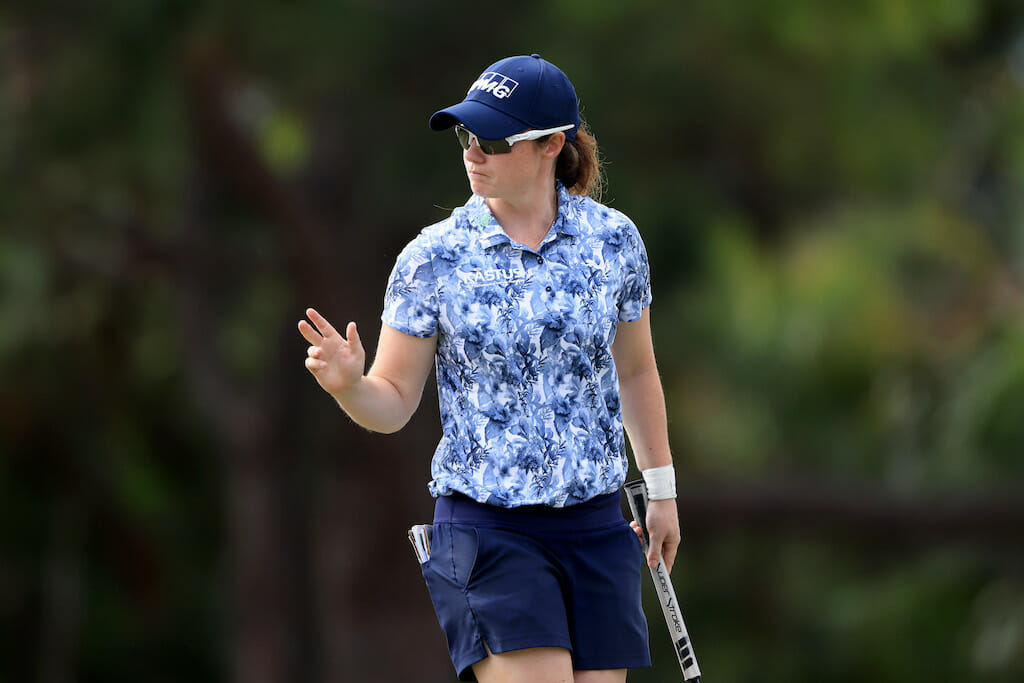 Leona Maguire described her course record eight-under 62 in the first round of the Pelican Women’s Championship as “stress-free” as she opened up a two-shot lead in Belleair, Florida.

The Cavan woman was flawless on day one, attacking pins and keeping the mistakes off the scorecard as a bogey-free effort that consisted of eight birdies allowed to create a two-stroke advantage over defending champion and playing partner Sei Young Kim.

Maguire has now been under-par in her opening round in 13 of her 18 events this season, and this was a particularly impressive round not just for her scoring but she also hit all 14 fairways off the tee and picked up birdies on all four par-threes.

It didn’t take long for Maguire to get her scoring under way, birdieing her opening hole and then adding another at the third, with two more arriving at the seventh and ninth to go out in 31.

She would replicate it on the back nine, too, birdies coming on the 12th, 14th and 15th, and she would cap it all off with a fine putt on the 18th for a closing birdie to set the record with a 62.

“It was pretty stress-free,” assessed Maguire. “I think I played the par-threes really well and birdied all of them, which really helped.

“It was just really, really solid. Hit a lot of greens, gave myself a lot of chances, and rolled some nice putts.”

The 26-year-old also hailed the impact of coach Shane O’Grady, who has been able to travel over with her this week for the first time to work with her at an event in person after the relaxation of border restrictions in the United States.

“First time in two years with Covid, he wasn’t able to travel. The last time he saw me was the second last Symetra event before I got my card in 2019, so it’s nice to have him here,” added Maguire.

“It’s been a challenge but, yeah, we’ve done the best we can. It’s nice to have him here and picking out a few things, even to help this week, but more so to help in the off-season for next year.

“(We’re) keeping it simple. There has been no major surgery on my swing. Just going back to basics really. Making sure my alignment, my setup is good. Taking that little bit of draw out of the ball that sort of crept in.

Meanwhile, despite a remarkable comeback, Jordanstown’s Stephanie Meadow will still need to produce three more big rounds to keep alive her hopes of retaining her LPGA Tour card for next season.

The 29-year-old was four-over after six holes following a birdie, two bogeys and a triple-bogey, but she responded superbly with five birdies — two of which came at her final two holes — and just one more bogey to get back to level-par 70 after her opening round.

Meadow needs to break back into the top-100 in the Race to CME Globe standings and her first round has her tied-51st, which is projected to drop her to 102nd in the money list.