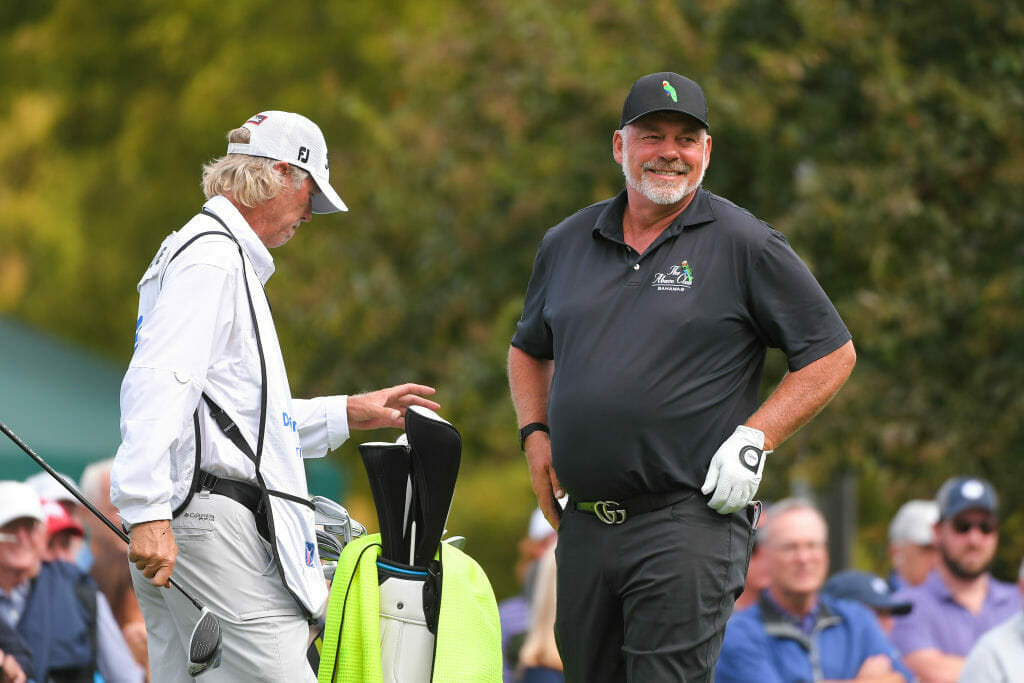 Darren Clarke smiles on the first tee box during the first round of the PGA TOUR Champions Dominion Energy Charity Classic at The Country Club of Virginia on October 22 2021 in Richmond, Virginia. (Photo by Ben Jared/PGA TOUR via Getty Images)

A good final day in Richmond, Virginia saw Darren Clarke finish just outside the top-10 at the Dominion Energy Charity Classic as Bernhard Langer set the record for the oldest PGA Tour Champions winner at 64.

Former Open champion Clarke closed with a four-under 68 at the Country Club of Virginia to reach nine-under for the week, good for a share of 11th but still five shots back of Langer, who defeated Doug Barron in a play-off to lift the title.
Despite a relatively high finish, Clarke will drop one place in the Charles Schwab Cup standings to 10th with only one event remaining before the season-ending Charles Schwab Cup Championship – although it is at the TimberTech Championship where he is defending champion.
Having started the day eight shots back of the lead, it was always going to be a big effort for the 53-year-old to mount a comeback to challenge for the title, but he should be fairly pleased with how he performed across the week in Virginia.
He should be particularly pleased with a final round where he started with two bogeys in his first three holes but managed to turn things around in the latter half of his front nine and the start of his back nine, putting together six birdies in seven holes – five of which were consecutive – around the turn.
A frustrating bogey on the 15th ended any hopes of him pulling off an incredible run for the title, but Clarke did finish with a birdie at the 18th to at least close on a high even if the result is damaging for him in his quest to win the order of merit.
Unfortunately for Clarke, the Charles Schwab Cup leader is Langer, who extended his lead at the top of the standings when he managed to overcome Barron on the first extra hole to lift the title at the Country Club of Virginia and make history.
As overnight leader Steve Flesch fell away, eventually carding a one-over 73 in his final round, it was left to Langer and Barron to seize the initiative and finish tied at the top at 14-under after rounds of 69 and 68 respectively.
And it would be the German who would succeed in the play-off, birdieing the 18th after Barron lipped out from six feet for the same score to lift his 42nd PGA Tour Champions crown and move within three of the record held by Hale Irwin.

“I’ve been knocking on the door. I’ve lost a bunch of playoffs. I tried to forget about that and block it out of my mind because I’ve had a lot of close calls,” said Langer.

“I hadn’t won since Tucson last year, but that’s how much sweeter it is.
“The Schwab Cup is the next goal as it has been for a year and a half or two years now. We’re a little bit closer, but it’s not over yet.”