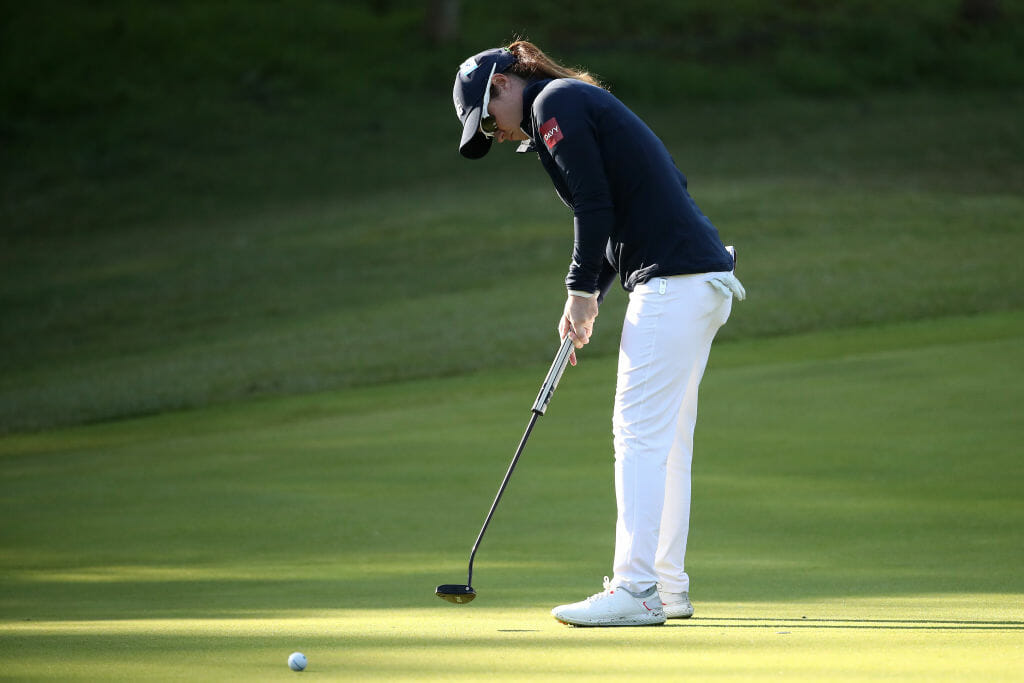 Leona Maguire will need a huge weekend in Busan just to keep herself in contention of claiming Rookie of the Year honours on the LPGA Tour after a battling second round in South Korea.

The Cavan woman needed to battle back from bogeys on her opening two holes to eventually card a level-par 72 at LPGA International Busan, keeping her at two-under for the tournament and in a tie for 44th at the halfway stage.
However, she needs to finish in the top-six to prevent ANA Inspiration champion Patty Tavatanakit from wrapping up the Louise Suggs Trophy race with two events to spare, which looks to be a tall order currently.
Maguire is six shots back of sixth-place, which is eight-under, while the lead is held by Hee Jeong Lim and Na Rin An at 11-under, the pair one shot ahead of Danielle Kang and In Gee Chun.
Although the narrative is shaped around the Rookie of the Year race, Maguire will have her sights set on winning the tournament and clawing back that nine-shot deficit to Lim and An, although she will need to produce better than she did on day two in Busan.
She left herself with a lot of work to do early after back-to-back bogeys to start her day, and failed to even pick up any momentum in the right direction before the turn as she parred her way back to the clubhouse and then bogeyed the 10th to fall over-par.
But that preceded a small resurgence when Maguire eagled the par-five 11th to get back into red figures, and her only birdie of the day came at the 16th to take her back up to where she started, albeit further back of the leaders than she was after day one.
As well as missing out on the Rookie of the Year prize, the 26-year-old is currently projected to fall one place in the Race to CME Globe rankings to 16th, although she can improve that by pushing up the leaderboard at the weekend, even if she can’t crack the top-six.
It was an excellent day for Lim, whose six-under 66 took her to the summit alongside first round leader An, who added a 69 to her opening 64 to stay in a share of the lead at 11-under.
That has them one ahead of Kang (68) and Chun (69), who are right on their tails at 10-under, but perhaps the most ominous figure charging up the leaderboard is that of Jin Young Ko, who roared back with a phenomenal eight-under 64 on day two to fire herself into solo fifth at nine-under.
Only one day after seeing her bid to hold the record for most consecutive rounds in the 60s on the LPGA Tour on her own come up one round shy, the World No.2 pocketed eight birdies in a bogey-free outing to bring herself right back into the mix on home soil.
Australia’s Minjee Lee and home favourite Hae Ran Ryu are the next best at eight-under for the week, with Thailand’s Moriya Jutanugarn leading a group of players at seven-under.
LEADERBOARD