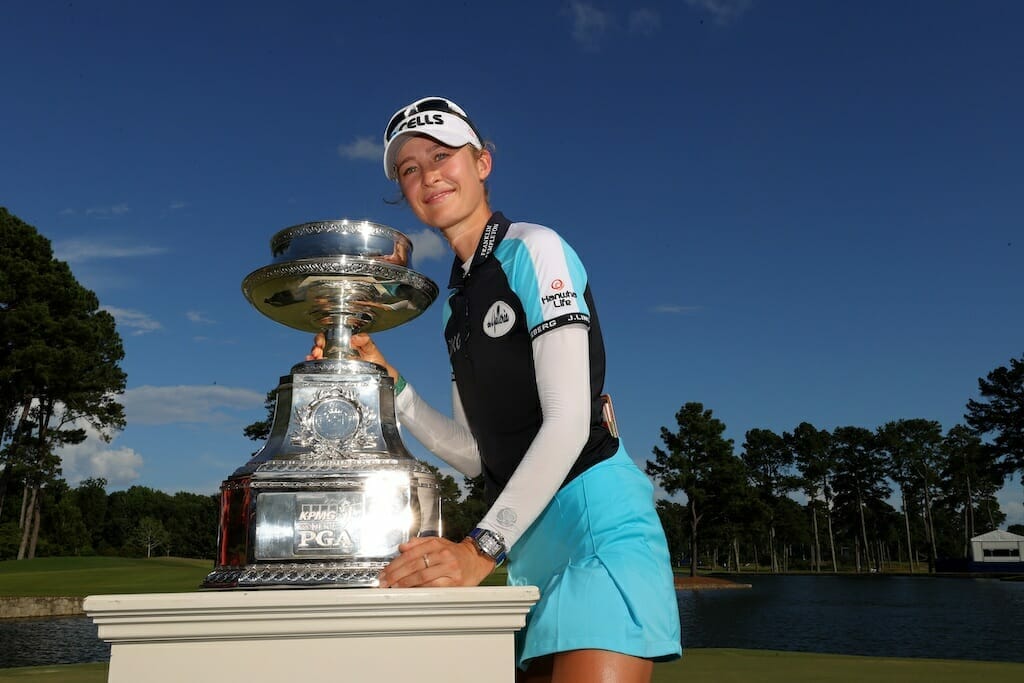 World No.1 and Olympic gold medalist Nelly Korda will play in the PNC Championship at the Ritz-Carlton Golf Club Orlando, Grande Lakes from December 16-19.

Six-time LPGA winner Korda, who qualified for the PNC Championship by winning her first Major at the 2021 KPMG Women’s PGA Championship in June, will play alongside her father Petr, a former professional tennis player and winner of the 1998 Australian Open.

The 23-year-old said: “I am obviously excited to get to play alongside so many legends of golf but if I’m honest, what excites me even more will be having my dad playing alongside me. After all these years of him watching and supporting us kids from the sidelines in both golf and tennis, it is going to be so much fun to be in a team competing together! The whole family is looking forward to enjoying this in the run up to Christmas.”

Six-time PGA Tour winner and 2016 Open Champion Henrik Stenson, is also playing in his first PNC Championship alongside his son Karl, age 11, commented: “I was thrilled to hear we had made the cut for this prestigious event and that we will be in the field this December. We are all in preparing for what will be, in the eyes of my family, the most important event of my season. Joking aside, I cannot wait to share the inside the ropes competitive experience with my son against so many icons of the game. We feel very privileged to be part of such an amazing field.”

The tournament, broadcast live on NBC, attracts major champions whose victories this year will span  from 1959 to 2021 and last year saw a field gather that had won a remarkable 67 Major titles. With only 20 teams in the field, this year has seen unprecedented interest from players past and present campaigning to claim a spot in the star-studded line-up.

In addition to Korda and Stenson, the other players confirmed for what is promising to be the most intriguing line-up to date are: nine-time Major winner and all-round golf legend, Gary Player, eight-time Major winner, Tom Watson, Lee Trevino who has played in every edition since the Championship begun in 1995, former World No1, David Duval, two-time Major winner, John Daly, three-time major winner Vijay Singh, 2013 PNC Championship winner Stewart Cink and Matt Kuchar, qualifying via his victory at the The 2012 Players Championship.

IMG’s Alastair Johnston, the executive chairman of the tournament commented, “We are delighted to be announcing such a strong first wave of players and to be welcoming Major winners, Nelly and Henrik to the PNC Championship for the first time. With half the field still to be announced, we look forward to sharing yet more exciting player news in the near future.”

Since the inaugural tournament in 1995, when ten major winners gathered with their sons, the PNC Championship has continued to evolve and develop. It now features 20 major champions and their relatives competing for the total purse of $1,085,000 in a two-day 36-hole scramble for the Willie Park Trophy. The 2020 edition was won by Justin Thomas and his father, Mike.

The PNC Financial Services Group, Inc. has been the title sponsor of the tournament since 2012.  The event formerly known as the PNC Father/Son Challenge, was renamed the PNC Championship in 2020 to reflect the high level of competition and field composition, while still celebrating this inclusive family event that showcases the special bonds that the love of golf creates.

To qualify for the PNC Championship, players must have won a major championship or The Players Championship. Their partner must not hold a PGA TOUR card.

The PNC Championship is operated in partnership by IMG and NBC Sports.