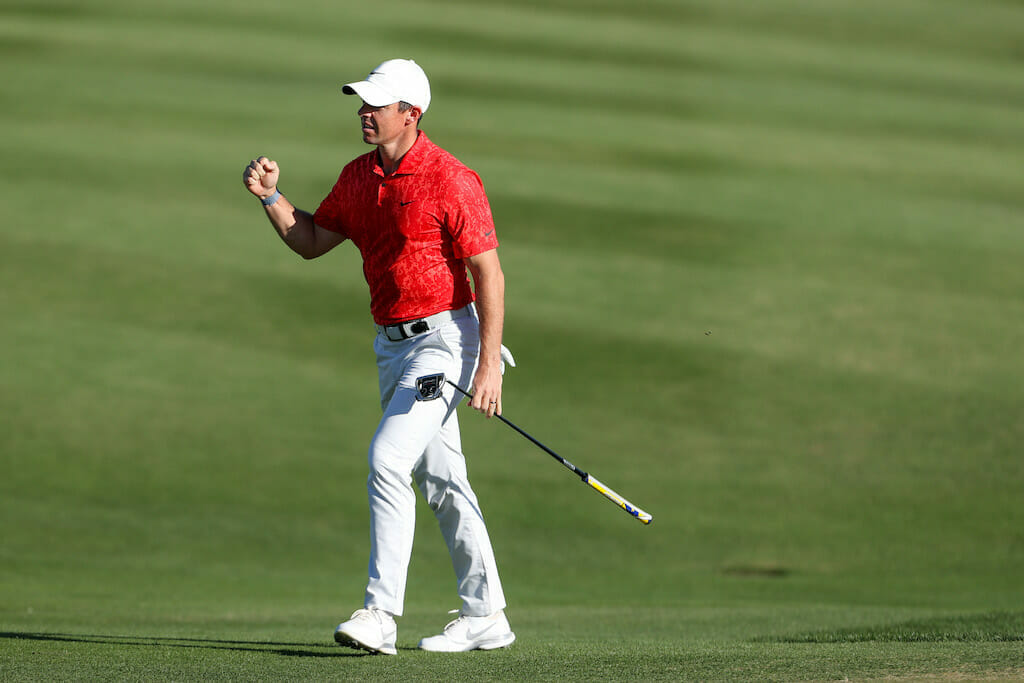 There’s no better tonic for an ailing golfer than winning and Rory McIlroy’s CJ Cup success should go a long way towards rejuvenating the one time best player in the world.

From the tears of his post-Ryder Cup disappointment, to his admission that golf means more to him than he’s been willing to let on lately, McIlroy has been humming a very different tune in the past few weeks and after hitting the jackpot in Vegas, now he’s plotting an encore.

“I’ve got nothing coming up for the next four weeks. I’ve got four weeks at home before I go to Dubai, but it’s four weeks to build on what’s just happened here.

“The last few months I feel like I have never worked as hard but I didn’t get what I wanted to get out of it. The whole week leading up to this, all I did on the range was try to visualise every shot that I hit, try to see draws, see fades, see high, see low and really just play around with it.

“The more and more I did that, the more it felt comfortable on the course – and that’s playing golf. That’s getting back to hitting shots and when it boils down to it, that’s all you need to do out there. Sometimes I forgot that in a quest to try to be too perfect probably, but this week was a great reminder that you don’t need to be perfect to be a great golfer.”

Many people sniffed at McIlroy’s pre-tournament suggestion last week that on his day, he still believes he’s the best player in the world. Without his A-game, McIlroy came out on top of a star-studded field where few else could, a timely reminder to those who doubt him that his talent knows no bounds, if he can just get out of his own way to express it.

Sunday was a great start in that mission, especially given the fact it was his Sunday singles performance at the Ryder Cup that allowed this past Sunday to happen at all.

“Yeah, so on the Saturday night of the Ryder Cup, I was done with golf. I didn’t want to see golf again until 2022,” McIlroy revealed, such was his disenchantment with his abject performances over the first two days at Whistling Straits.

“Then I talked about that Sunday singles match and that sort of sparked a little bit of a flame again. So Saturday night of the Ryder Cup, I certainly wasn’t going to be here, and Sunday night at the Ryder Cup I thought, go to Vegas, go to CJ and try to build on this little bit of a breakthrough that I’ve had.”

And build on it he did. Twenty PGA Tour wins is a landmark achievement, and with four Majors on top of that at just 32-years young, it’s already been quite the innings for the new world number 8. For context, Phil Mickelson had achieved 21 Tour wins by McIlroy’s age with no Major triumphs, so there’s no telling just how far McIlroy could go.

In saying that, this past week was far from the ultimate test, with more challenging courses and stages sure to reveal much more about where McIlroy’s game is at. Nobody will know that more than McIlroy, of course, but in the grand scheme of his still young career, how would the one time heir apparent to Tiger’s throne assess his own achievements to this point?

“I guess it’s all relative, right,” McIlroy says. “I remember I turned pro in ’07 and I went down and played the Australian Masters at the end of that year. I got my European Tour card and the first two days I was paired with Aaron Baddeley. I think he was ranked 18th in the world.

“I remember playing with him for the first two days and thinking, ‘Oh my God, this guy is 18th in the world. How cool would that be?’ I was sitting here this week before the start of this tournament as the 14th [best] player in the world and basically people were wondering if I was going to retire… so it’s all relative.

“I guess the answer to your question is that’s what I thought was an achievement at the start of my career when I turned pro was to get into the top-20 in the world. So I’ve surpassed all of that, but as you go on, your goals, you have to reframe everything and you have to keep resetting your goals.

“As I’ve gone along in my career, I’ve had to do that because you just, you keep going. You can’t just stagnate and stay the same, you have to try to keep getting better and keep doing more things.

“I think that’s what this is. Golf is just about moving forward and there’s always next week and you’re always trying to get better. So yeah, that’s a very long-winded way of saying 20 wins seemed like a long way away whenever I turned pro. I think this is probably like 30th (it’s 29) worldwide if you count European Tour wins, so it’s been a pretty nice career so far.”