Solid start for Caldwell as Valderrama shows its teeth 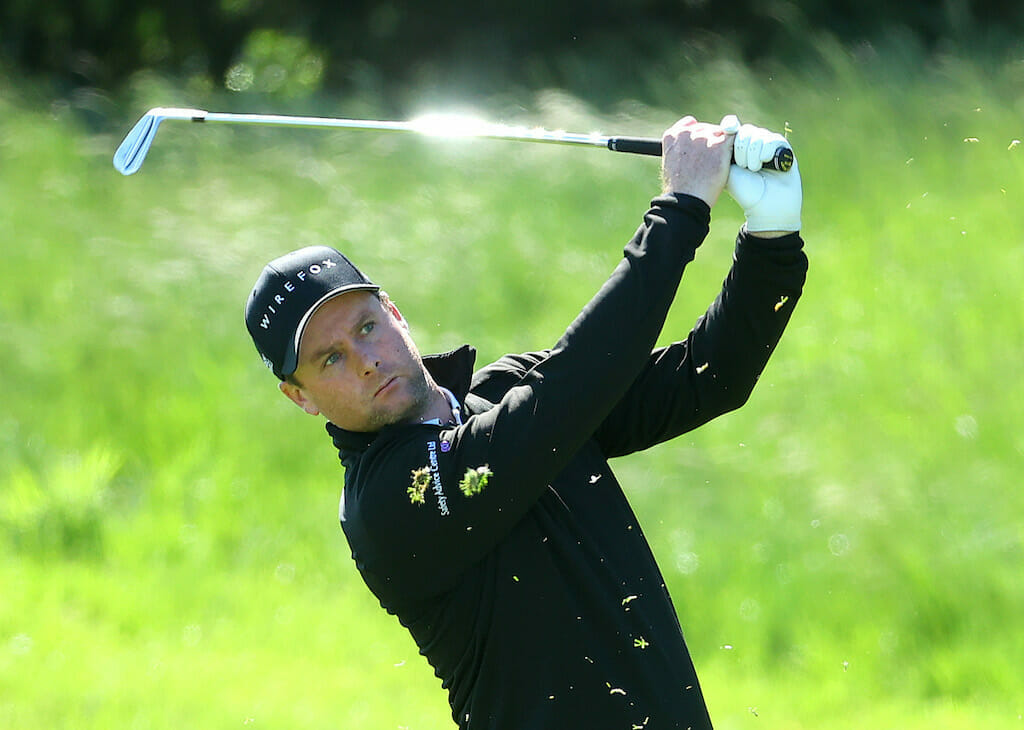 Jonathan Caldwell had a solid opening day at the Estrella Damm N.A. Andalucía Masters as only nine players went under-par at Valderrama, which played every bit as tough as its fearsome reputation.

That was best exhibited by World No.1 Jon Rahm, who didn’t have a single birdie on his card and slumped to a seven-over 78 in his second consecutive European Tour start in Spain and will be battling just to make the cut.

But Caldwell produced a much better round, finishing with a one-over 72 which has the Clandeboye man just outside the top-20 — a reflection of how difficult scoring was.

Four bogeys and three birdies has Caldwell five shots back of Julien Guerrier’s first round lead, the Frenchman signing for a four-under 67 that included six birdies and a pair of bogeys.

Last week’s Open de España winner Rafa Cabrera Bello looks to be thriving in front of home fans as he went low again with a three-under 68 to have him one shot back, while Romain Langasque, another Frenchman, is solo third after a 69.

For Caldwell, it was a round that threatened to go off the rails when he bogeyed his opening hole, the Scandinavian Mixed champion taking a five at the par-four, but birdies at the fourth and sixth around a bogey at the fifth had him level-par at the turn.

Bogeys at 11 and 13 were around a birdie on the 12th but, despite being over-par to start his week, that does not equate to a bad round in Sotogrande for the 37-year-old who, at 95th in the Race to Dubai, still harbours hopes of reaching the top-60 and qualifying for the DP World Tour Championship.

At the top of the leaderboard, while Cabrera Bello may be a man in form on home soil, Guerrier is also on a good run having tied his best European Tour finish in Madrid last week by coming in tied-third at the Club de Campo Villa.

Six birdies and two bogeys equated to a 67 that has him one clear and it is the first time he has ever held the first round lead on the European Tour in his career.

“It was really complicated today. The wind was growing stronger on the back nine. I had two bogeys on the scorecard, very few, and six birdies. It’s good to have six birdies in these conditions,” said Guerrier.

“I was putting really well. We know with these firm greens, they are really quick, and with this wind it’s very difficult. But I holed a few long putts on the first and the third, and after I hit a lot of greens in regulation. That was the key.

“I think I’m more relaxed (after last week). I’m playing to shoot a low score, not save my card, that’s the main thing. We work every day, improve our game and it’s working at the end of the year.”

The man the home fans will be eager to see lift the trophy will be Cabrera Bello, the 37-year-old aiming to double up in Spain having claimed his fourth European Tour title only four days ago.

He started well in his bid to do so, the man from the Canary Islands taming Valderrama with a consistent round featuring four birdies and just one bogey to trail Guerrier by one, and Cabrera Bello admitted it was a good all-round performance.

“I felt like I did everything pretty well. If I were to highlight something, I’d say my putting was really good. I had a lot of testers – that’s normal on a windy day with fast greens, except for one I made everything inside eight or ten feet. I felt that was the difference for me,” said the popular Spaniard.

“It’s already an intimidating course when there’s no wind. With wind it makes it all that tougher, but at the end you just accept it is what it is. It’s going to be hard, the wind will switch, you’ll end up in some tricky spots.

“You know it’s a different type of tournament where three pars in a row equals a birdie. That’s what you have in mind and that’s how I tried to deal with this course and other courses that are as tough as this one.”

Langasque had an eagle, three birdies and three bogeys in an eventful 69 to claim third on his own, with seven players tied for fourth at one-under, including Raphaël Jacquelin, who has one hole left to complete after poor visibility suspended the first day’s play.

It was a disastrous day for Rahm, however, as he slumped to four birdies and a double on his front nine – which was the back nine having started at the 10th – to eventually sign for a 78 and, in a tie for 107th, he knows he will need a second round that is practically the polar opposite to reach the weekend at Valderrama.