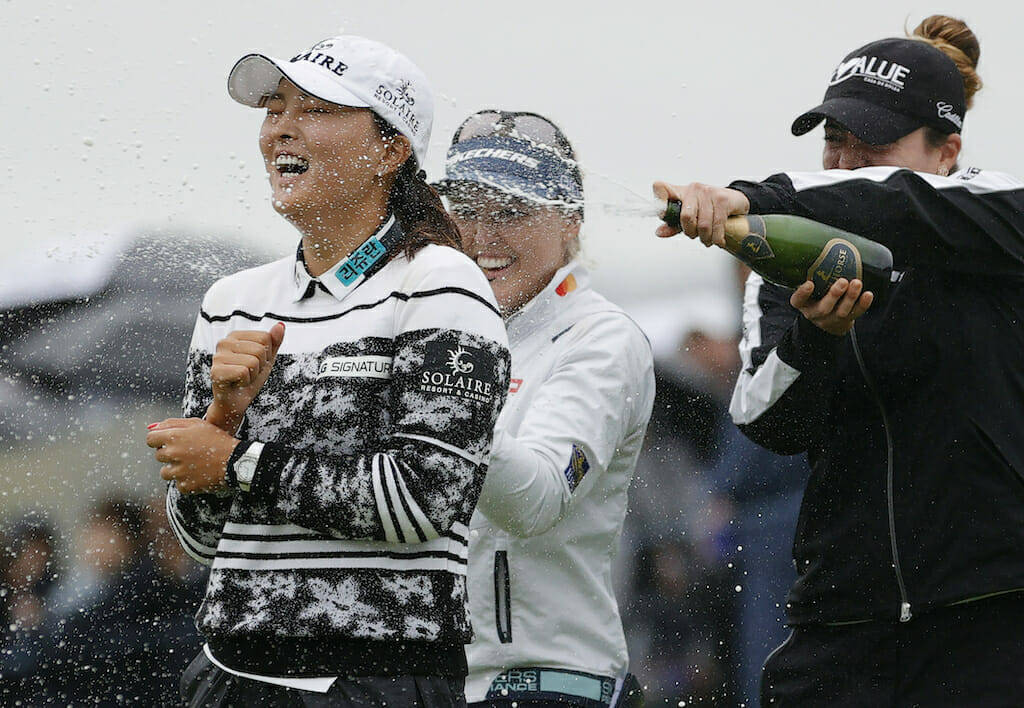 Gabby Lopez of Mexico (R) and Brooke M. Henderson of Canada (L) pour champagne on Jin Young Ko of Korea (C) after her win at the Founders (Photo by Sarah Stier/Getty Images)

Despite moving herself up the leaderboard on the final day of the Cognizant Founders Cup in New Jersey, Stephanie Meadow wasn’t able to do herself any favours in the Race to CME Globe standings.

The 29-year-old Jordanstown woman concluded her tournament at Mountain Ridge Country Club with a two-under 69 – her best round of the week – to finish in a tie for 60th at one-over for the week.

Having started the week 101st in the Race to CME Globe, that is where she still stands despite to this result, and time is running out for the former World Invitational champion to break back into the top-80 to retain her LPGA Tour playing rights for next season.

Starting at the 10th, Meadow had put herself in a good position to kick on with birdies at the 13th, 15th and 18th, but a double-bogey at the second undid a lot of that good work. She did respond well with a birdie at the third, which was enough to allow to sign for a 69 but, with only two tournaments remaining before the Tour Championship, she needs a big finish to the season to break into the all-important top-80.

Meanwhile, Jin Young Ko went wire-to-wire to pick up her 10th LPGA Tour victory and defend her title at Mountain Ridge, all while writing her name into the history books twice at the same time.

The 26-year-old Korean shot a five-under 66, which tied Annika Sorenstam and So Yeon Ryu’s record of 14 consecutive rounds in the 60s, to claim a comfortable four-shot victory over Germany’s Caroline Masson in New Jersey.

Not only that but Ko also broke Tiger Woods’ previous record of 110 consecutive holes without a bogey on a major golf tour, her dropped shot at the par-four 17th ending her streak at 114 but putting her clear at the top on her own.

Fortunately for the two-time Major champion she had already done the heavy lifting before that, starting the day four ahead and carding six birdies to dominate the rest of the field, meaning the bogey at 17 was a mere footnote on her way to raising the trophy.

“But I played well and I just tried to focus on my body and my swing. I don’t want to look at the scoreboard and the other players.”

When asked about matching Sorenstam and Ryu’s record, Ko modestly added: “I just have fun. I’m just trying to have fun on the course with my caddie and the other players.”

Masson shot the best round of the day, a seven-under 64, to claim solo second at 14-under, with a 69 handing Elizabeth Szokol solo third at 11-under as she failed to keep in touch with playing partner Ko.

The third member of the final group, Yuka Saso, finished with a 70 to sit 10-under in a tie for fourth alongside Jeongeun Lee6.