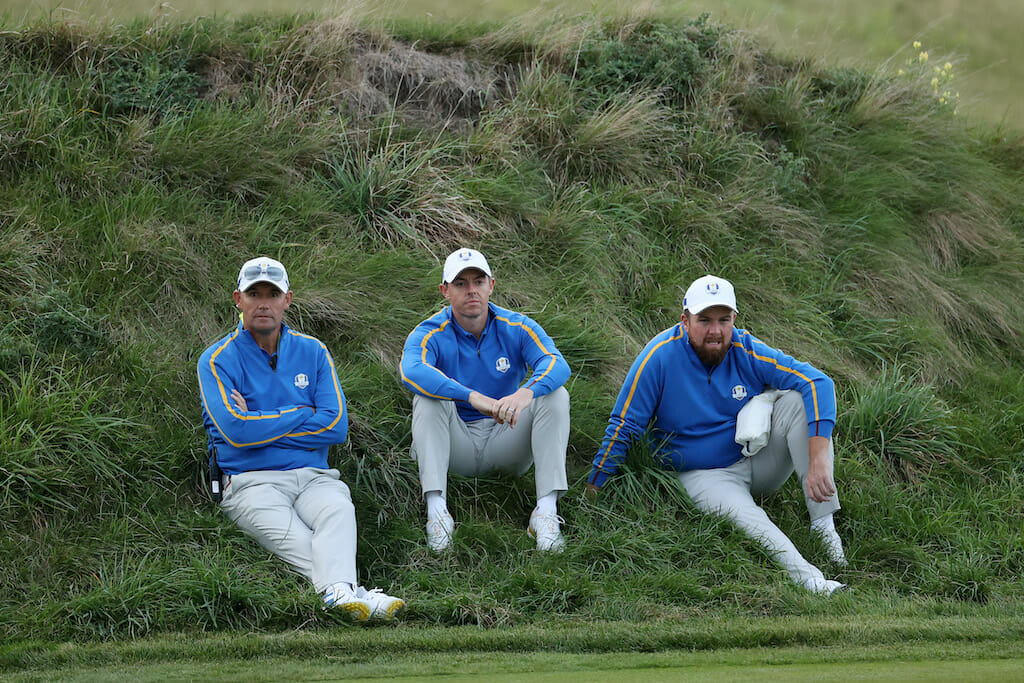 Captain Padraig Harrington insists the two half points put on the board late in the day by Europe could be the little momentum swing his side so desperately needs to mount a comeback at the Ryder Cup today.

Europe trail an inspired USA 6-2 after losing both the foursomes and fourball sessions 3-1 on Friday. In fact, it was only Harrington’s opening duo of Sergio Garcia and Jon Rahm who managed to put a whole point on the board. However the Dubliner believes the late halves earned by Tommy Fleetwood and Viktor Hovland, and then a superb Tyrrell Hatton and Jon Rahm, with the former nailing a clutch birdie at 18, could prove just as significant.

“No doubt it was a tough day,” said Harrington. “Clearly not what you wanted, 6-2. There’s obviously still 20 points to play for. We’ve only just played for about 25 per cent at this stage. It isn’t a good start but there’s still a lot to play for.

“My team played well today. Just a few times, the momentum, the odd putt didn’t go in and you need a bit of momentum. Hopefully, I just think the last couple of matches there, when it was really, really tight, the boys came through and it certainly felt like… those two halves at the very end were crucial for us. Tyrrell with the birdie on the last – very, very important in those situations.

“As much as we would have liked to have gotten wins on the board, we didn’t feel like we could afford to have lost those matches. Maybe a little bit of momentum swing there and we feel good about that.

“Coming out tomorrow, obviously we need a big day. You can’t just turn around and try to eat into a lead straight away in one session. It would be lovely if it happened but you can’t think like that. You’ve got to do it slowly, one step at a time.

“We’ve got 20 points to play for and we’ve got to prepare ourselves for, hopefully for us at this stage, a long battle all the way through. If we are going to get this done, it’s going to be a very tight one.”

It was a particular disappointing day from an Irish perspective as Rory McIlroy’s woes from the morning foursomes bled into the fourballs. Having lost limply 5&3 alongside Ian Poulter in the morning, McIlroy teamed with Shane Lowry in the afternoon where they came up against a U.S. juggernaut pairing of Tony Finau and Harris English.

Despite a promising start for Lowry, the Irish pair had no answer as Finau made eight ‘3’s in 13 holes before the USA wrapped up a 4&3.

“We can come back from 6-2,” McIlroy insisted. “If it’s 6-2, we can come back.” And although it is 6-2, and Europe only trails by 4, McIlroy won’t be the one mounting the comeback when play resumes on Saturday with the four-time Major winner on the sidelines alongside Lowry, Poulter and Tommy Fleetwood as Harrington takes a fresh approach to this morning’s sessions, comfortable in his selection.

“We have plenty of options on our team,” Harrington said, prior to the picks being made public. “Spoiled for choice in many ways, and yeah, we have options, we have looked at that and we have always known that this week that our players are all capable of playing foursomes and fourball.

“You know, sometimes you never see that. So plenty of options. I’m very comfortable again with the team I’ve put out tomorrow. Wait and see in each of those matches whether they can create their own momentum and then bring that to the team.”