‘We don’t know how to contain Poulter,’ admits Stricker 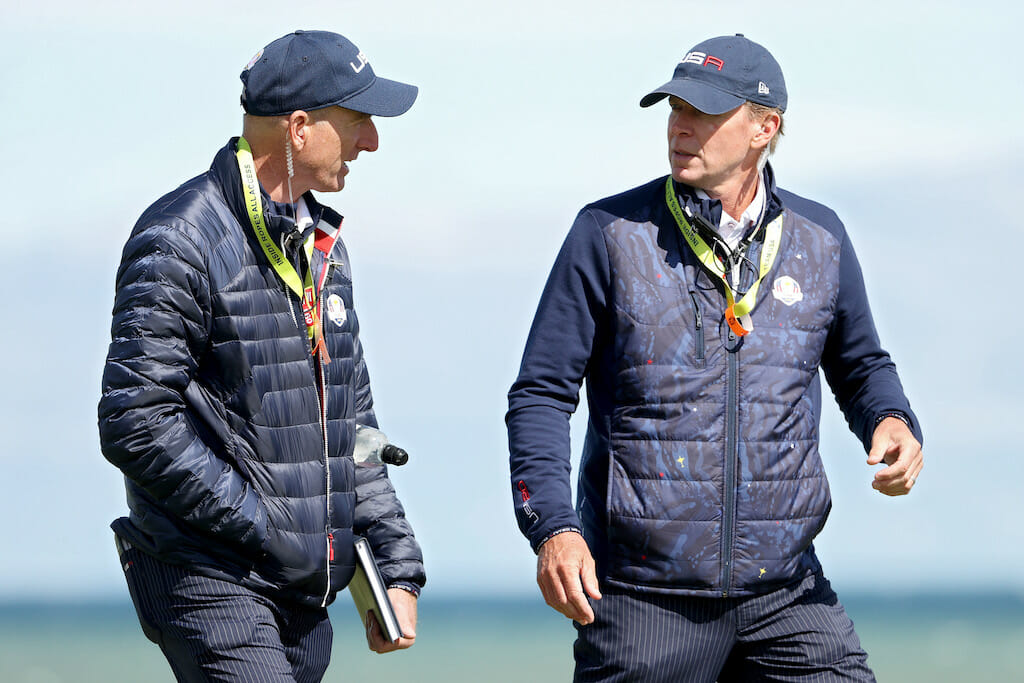 If Ian Poulter was in need of an injection of confidence prior to Friday’s opening day of the Ryder Cup – probably not – then that boost arrived in the unlikely form of US Captain Steve Stricker who admits he’s the latest US supremo struggling to wrap his head around how to contain Europe’s ‘Postman’.

A key figure in Europe’s recent run of success against the States, Poulter has been an ever-present in European blue since winning four points at Valhalla in 2008, where Stricker was one of his victims in a 3&2 Sunday singles mauling.

The 45-year-old Englishman also won four points as he inspired the ‘Miracle at Medinah’ in 2012 and so it was no great shock that he was entrusted by Padraig Harrington with a wildcard pick for this week’s assignment in Wisconsin. Before a ball has even been hit, it seems Poulter has the opposition worried. Padraig’s pick is already paying off.

“We just don’t know how to contain him, I guess,” Stricker admitted on the eve of the 43rd Ryder Cup.

“We’ve had a difficult time. I played him in a singles match back at Valhalla and lost to him. He’s a tough competitor and this brings out the very best in him. He seems to make some very crucial putts, hit crucial shots when he needs to, and then just rises to the occasion.

“It seems like he plays better at the Ryder Cup than he does at any other PGA Tour event throughout the year. He just elevates his game to another level.

“He’s kind of the backbone of that team at times. He’d be a good guy that if we could figure out – and hopefully we can this year – to give him a couple losses for a change. But it’s tough to do.”

Stricker will hope to get his pairings right in a bid to derail Poulter’s enthusiasm and ahead of revealing his foursomes partners at tonight’s opening ceremony, Stricker believes he already has his two-man teams nailed down.

“Yeah, we have that down,” the 54-year-old said. “We went over this on Monday. I wanted the guys to know what the plan was for Friday on Monday so we can prepare that way.

“I think that’s something that in previous teams that I’ve learned, the communication part, getting guys to understand their position and their roles, so we’ve taken a lot of time and energy in trying to talk to these guys and define both their roles and tell them what we expect from them and what they expect from us.”