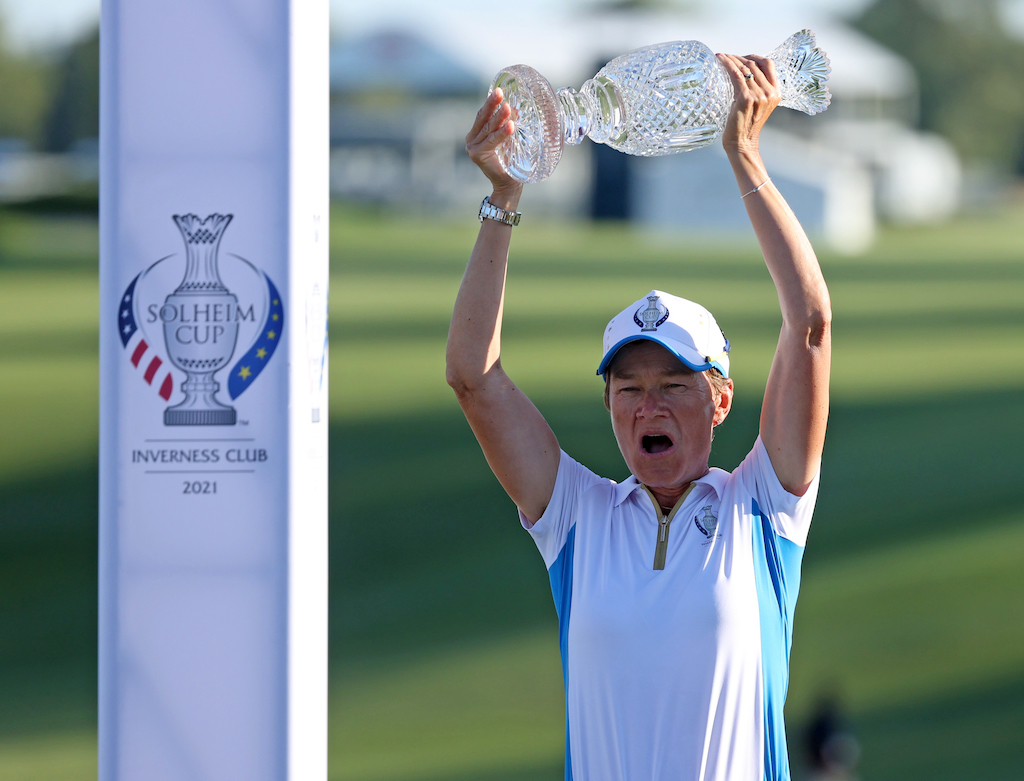 Scotland’s Catriona Matthew must surely be honoured with a Damehood after standing down as Europe’s first-ever double winning Solheim Cup captain.

Matthew, 52, indicated moments after leading Europe to a stunning 15 – 13 triumph in Ohio that she will not seek the captaincy when the 2023 Solheim Cup is staged at Finca Cortesin in Spain.

‘Beany’, as she is more affectionately known, steered Europe to just a second back-to-back win in the 31-year history of the Solheim Cup having captained Europe at Gleneagles in 2019 and now guiding Europe to a stunning two-point success for only a second occasion on rival US soil.

And what’s more impressive, Beany holed the victory putt as a member of the 2013 European Team that had first won in the States with a record-setting eight-point victory in Denver. The North Berwick star hinted she was calling it quits minutes after Finland’s Matilda Castren made it a 15 -13 success for Europe when asked if he would now try to make it three wins in succession.

Matthew said: “Nope, it’s over to someone else now.”

Matthew’s news that she’s standing down ends an impressive Solheim Cup career for the mother of two having played in nine Solheim Cups since her debut in 1998 and being in three winning teams, including 2013 when Europe won for a first time on US soil.

As a captain, she was at the helm when Europe won the last three matches to claim victory by a point in 2019 at Gleneagles, and Matthew made it back-to-back wins on US Labor Day Monday on the aptly-named Inverness Golf Club in Toledo Ohio. The champion Scot joins American captains Judy Rankin (1996 & 1998) and Julie Inkster (2015 & 2017) as the only two-time winning Solheim Cup captains.

Matthew said: “We have so many good past players, and I think everyone deserves their chance to be captain.

“I think to be part of the Solheim, I was lucky enough to play in nine and I’ve captained two, and I’ve had a fantastic time. It’s the best week I’ve had every two years, and to have been involved with it now for over 20 years, I’m sure I’ll be there watching, but it’s someone else’s turn.”

It was Sweden’s Anna Nordqvist, the reigning AIG Women’s Open Champion, who was asked ahead of Monday’s victory celebrations to sum-up Matthew’s Solheim Cup legacy.

Nordqvist said: “We all look up to Catriona Matthew a lot. She’s been a great role model for all of us. I’ve had the opportunity to play with her on the team, which has been a huge honour. I obviously watched her growing up.

“Playing the first two rounds of the British Open the year (2009) when Catriona won, seeing her shoot 29 on the back nine of Lytham St. Anne’s is still probably one of the best rounds I’ve ever seen. Seeing her win obviously just after having her second baby is still amazing.

“She’s been a great Solheim Cup player. I remember watching her in 2003 in Barsebäck when I was outside the ropes and could only dream about making one team, and now I’ve made a few.

“But having her as a captain the last two years and seeing the way she has led the team, the way she’s brought all the girls together, hands down this is the best team I think Europe ever had.

“She did have to make a few hard decisions, leaving a few other players that have been playing good out. But just the calm that she has around her, the confidence she has in all the players, the way everything is thought out and how easy her and the rest of the assistant captains make it for us, it’s been an honour to play for her as a captain the last two Solheim Cups.”

Social media went into overload with messages of congratulations to Matthew and her team with fellow Scot Colin Montgomerie, who led Europe to victory in the 2010 Ryder Cup, quickly tweeting: “Congratulations @SolheimCupEuro @Beany25 to win with little or no course support was amazing.  Everyone in European golf is so proud of you.”

Norwegian Suzann Pettersen, a vice-captain under Matthew, is expected to be named the 2023 captain.