Team Europe lead after day one at Solheim Cup 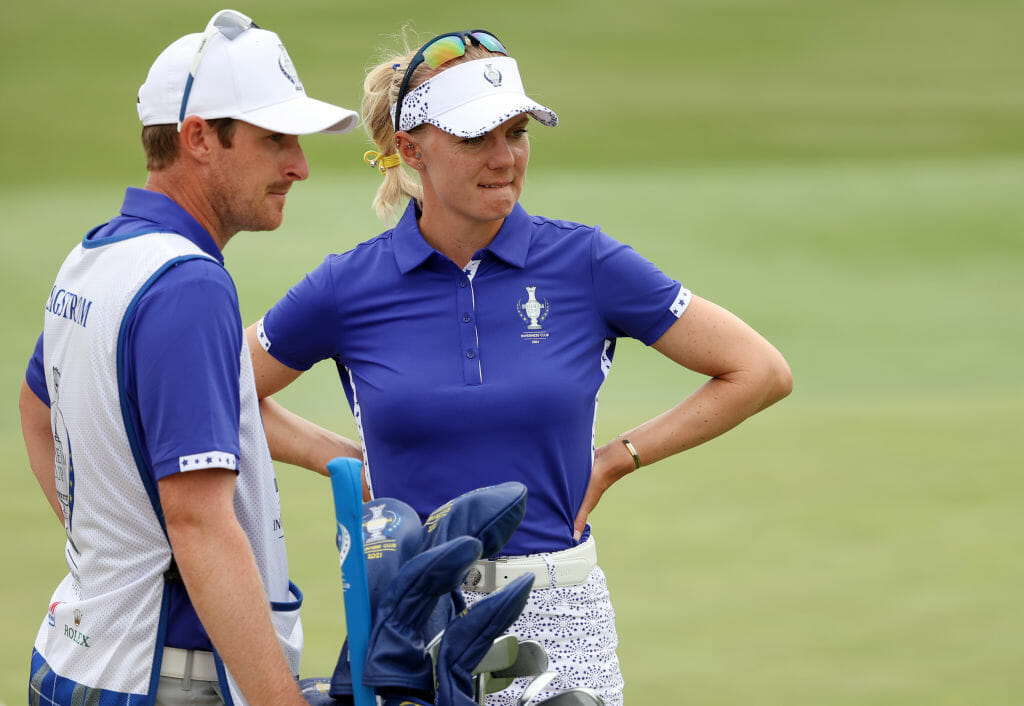 Madelene Sagstrom of Team Europe during the Foursomes Match on day one of the Solheim Cup at the Inverness Club on September 04, 2021 in Toledo, Ohio. (Photo by Maddie Meyer/Getty Images)

After all the anticipation, day one at the Solheim Cup did not disappoint! All of Ireland was supporting Leona Maguire from in front of the TV and she was magnificent – even moreso than we could ever have hoped.

Maguire was selected for the morning foursomes where she holed the winning putt in her match with partner Mel Reid against the much favoured Korda sisters.

“I couldn’t have asked for a better start to my Solheim Cup career and I was very lucky to have Mel alongside me,” said Maguire to Sky Sports after her first match.

“I think everybody had written us off today and we took that in our stride and we wanted to be as relentless and fearless as possible and I feel like we did that,” she added.

Maguire was then selected to play in the anchor match of the fourballs in the afternoon with Georgia Hall, which they won 1up.

“It’s a team effort and I’m here to do my part for the team and I was fortunate to have two great partners on day one. We hung in there this afternoon and the momentum changed but we stayed patient and fought back. Hopefully that will give us some momentum going into tomorrow.

“I’m trying to stay as calm as possible and soak it all in. It’s been great, there’s been more European support here than I thought there would be so I really enjoyed the first tee this morning,” added Maguire.

The European Team took a 3.5 to .5 lead after the first round of matches before things got heated in the afternoon matches – well it wouldn’t be the Solheim Cup without some controversy. It’s just a pity that the headlines will be more about what happened on the 13th hole than the great golf that was played.

So what really happened?  Well, Nelly Korda putted and, according to the referee with the match, the ball was overhanging the hole when Madelene Sagstrom touched the ball before Korda had been given enough time to get to the hole, plus 10 seconds as the rules of golf permit. And so the putt, which Sagstrom was best placed to say whether or not was actually overhanging, was given to Korda as an eagle ‘3’ which gave USA the hole and also the lead in the match which they never relinquished, finishing the match 1up.

Speaking after the match Sagstrom was understandably emotional and, holding back the tears, she said to Sky Sports; “I would never pick up a putt that had a chance to go in. I certainly don’t agree with the decision of the ball being on the edge but I didn’t follow the 10 second rule so….it sucks right now because I feel like I’ve let my team down.”

“It’s just bad that the game is going to be on that decision really, we put up a strong fight.”

Unfortunately the incident will provide fuel for column inches and it’s worth noting that the call wasn’t made or even asked for by Korda or her playing partner Ally Ewing – it was a decision made by the referee and the television rules official.

In the end, seven of the eight matches on day one went down the 18th and it was Europe who took the overnight lead as wins for Anna Nordqvist / Matilda Castren (4up) as well as for Georgia Hall / Leona Maguire (1up) set up a 5.5 to 2.5 scoreline ahead of Sunday’s matches.