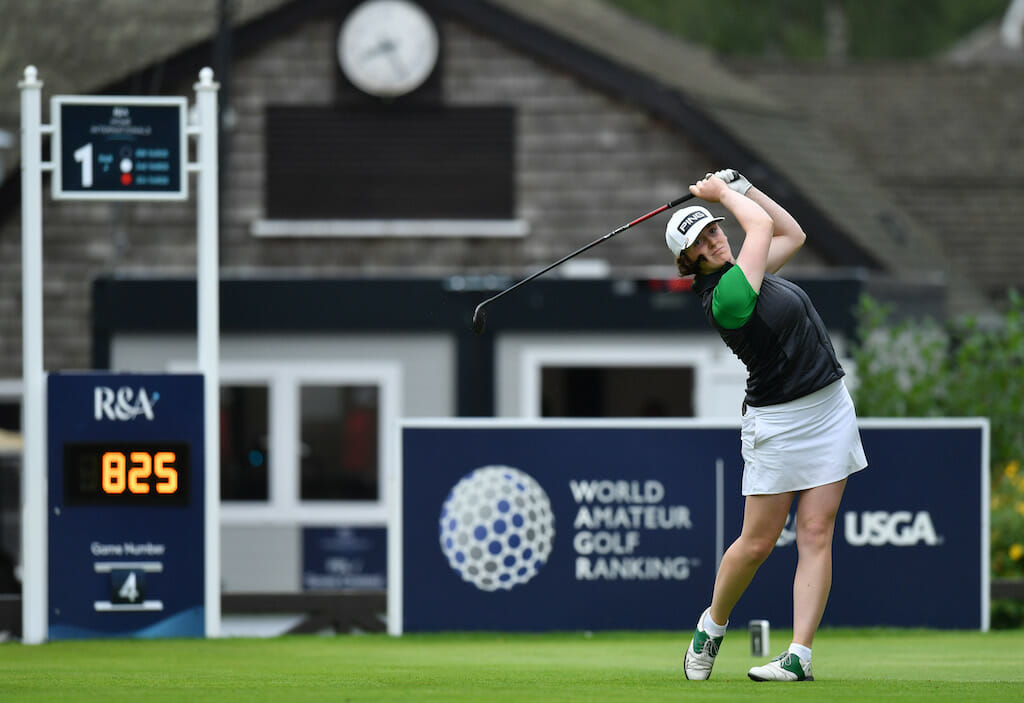 Castlewarden’s Lauren Walsh makes her Major Championship debut today [11.21am] alongside the likes of LPGA star Leona Maguire [12.27] when the AIG Women’s Open brings the curtain down on Major season at Carnoustie.

The Wake Forest star, who’s ranked 21 in the women’s amateur standings, also has a Curtis Cup date in Wales to look forward to this month but nothing will surpass the surprise she felt when learning of an opportunity to test herself against the best players in the world.

“It’s honestly mad,” she told Golf Channel ahead of playing the first two days with America’s Mo Martin and South Korea’s Chella Choi. “The thought of playing in a Major is still crazy to me.

“I was at a training camp in Conwy [in April] for the Curtis Cup, and I got an email that said, ‘your exemption into the AIG Women’s Open has been accepted.’ I was like, ‘oh great, I got into the final qualifier’. It was only after I re-read the email and thought, that says ‘Women’s Open.’ ‘That doesn’t say final qualifier’.

Walsh, who turns 21 next month, has been able to add more joy to the occasion, recruiting her sister Clodagh to caddie this week in a Walsh family affair.

“I’m lucky to have a competitive golfer as a sister. Nobody knows my personality and my game better than Clodagh. Having Clodagh on the bag, I know I’ll enjoy myself out there,” Walsh added, who picked the brain of Lexi Thompson already this week in a practice round.

No matter how the next two days go for Walsh, experiencing an Open amongst the best players in the world will have huge benefits for her golfing career. It’s on invites like this that Leona Maguire was able to hone her craft and come to understand what she needed to improve in her game to mix it with the very best.

The Cavan professional, despite still technically being a rookie, has already established herself as a leading player on the LPGA Tour. She might still be chasing that victory but Maguire is forever knocking on the door, boasting five top-10 finishes coming into this week where she’ll hope to make a type of home advantage count in her bid to get competitive in another Major having signed off at last month’s Evian with a tournament record equalling low round 61.

Maguire tees up alongside Yealimi Noh and Inbee Park for the first two days with a 12.27pm tee time today [Thursday]. She’ll have the added motivation of locking down a place on the Solheim Cup team, set to be announced at week’s end, while if further incentive was needed to get into contention this week at Carnoustie, players will be competing for a record prize in Scotland with the AIG Women’s Open setting a new benchmark for prize money in women’s golf with the announcement that the prize fund for this year’s championship will increase by $1.3 million to $5.8 million with the winner earning $870,000.

With the support of title sponsor AIG, the largest prize fund in women’s major championship golf will increase by a further $1 million to no less than $6.8 million in 2022. This will more than double the prize fund from 2018 before AIG’s partnership with The R&A commenced.