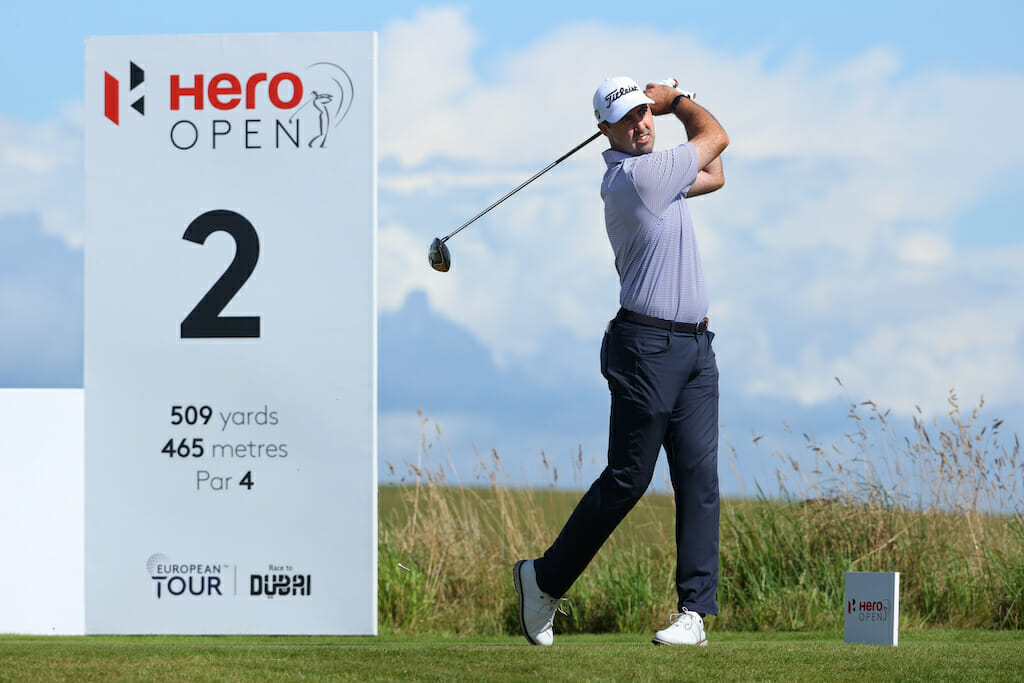 Niall Kearney gave his hopes of securing a European Tour card a massive boost, firing his second successive 66 to snatch a top-10 finish at the Hero Open at Fairmont St Andrews.

The Royal Dublin professional made the most of yet another main Tour start, racking up six birdies in a blemish-free round on Sunday having dropped just one shot over a brilliant weekend that saw him grab a tie for 8th at 16-under par.

“I actually hit the ball quite well but on the back nine today I struggled to be honest. I think I was two-under on the back nine so I felt like I robbed a decent score today,” Kearney laughed, who banked €27,283 and moved up 13 places to 121st on the Race to Dubai rankings.

“Overall I hit the ball well. Had the better side of the draw on Thursday and Friday which obviously made it a little bit easier but I like the course – was here last year and it obviously suits me.”

It’s been quite the year for Kearney who went into the season with category 22 status, uncertain as to how many starts he’d avail of on the main tour this year. That number has turned out to be significantly more than he ever could’ve envisaged and with two more to come, starting with Thursday’s Cazoo Classic before a trip the following week to Czech, there’s opportunity aplenty for the 33-year old to play his way into the top-110 on the Race to Dubai standings, thus guaranteeing full playing rights next year.

“I’m getting the opportunities to play. I’ve got a low category — category 22 — so it’s great I’m getting to play almost every week,” Kearney acknowledged.

“I’m hitting the ball well and my form seems to be quite good. Even Thursday and Friday this week I felt I left a lot of shots out there but I was comfortably making the cut. So it gives me confidence going forward. I have another start next week down in the London Club and then a start in Czech the week after. This is the third week, so that will be five on the road.

“Hopefully I can keep the run going and get myself up the Race to Dubai ladder as well. I didn’t hit the ball very well there off the tee on the back nine so I’ve a little bit to work on.”

As for Ireland’s other finishers, it wasn’t the best Sunday for Clandeboye’s Jonathan Caldwell who carded a one-over 73 for a tied 30th result at 11-under par. Gavin Moynihan, despite struggling with injury all week, signed off with a superb four-under 68 for a much-needed share of 48th at seven-under.

At the top, Grant Forrest became the first Scotsman to win on home soil in nearly a decade as he triumphed at Fairmont St Andrews. The 28-year-old started the final round in a share of the lead with compatriot Calum Hill and the pair traded blows on the front nine as they both made the turn in 33 shots. The turning point of the afternoon came on the tenth hole as Hill double-bogeyed the par four, with Forrest making birdie for a three-shot swing.

Forrest then birdied the 11th to move to 23 under par and he was joined on that number by Englishman James Morrison who made a late charge with a nine under par round of 63. Forrest lost the lead after a bogey on the 16th, but he recovered with a birdie on the 17th and left himself two feet for birdie – and victory – on the 18th.

Forrest tapped in the putt in front of the home fans, signing for a six-under par round and a 24 under par total, also securing the first Scottish win on home soil since Paul Lawrie triumphed at the Johnnie Walker Championship at Gleneagles in 2012.

“So many emotions,” he said. “To do it in front of everyone who has come up to support me, the last year and a half has been a real challenge on and off the course. I’m delighted, it’ll take a while to sink in.

“I hit a poor shot into 16 and tried to be a bit too safe and three putted, I saw the scoreboard and knew what I needed to do. The big thing all day was one shot at a time, just keep hitting shots. I hit a great nine iron into 17, nice and close, that really helps. And two great shots into 18, it was a great way to finish.

“It means so much. We’ve been through quite a lot as a family. To do it here, it’s what I’ve always dreamed of, winning a European Tour event. I can’t believe it.”

Morrison finished second, two strokes ahead of Spain’s Santiago Tarrio who continued his incredible recent form with a 21 under par round. Hill and compatriot David Law shared fourth place on 20 under.