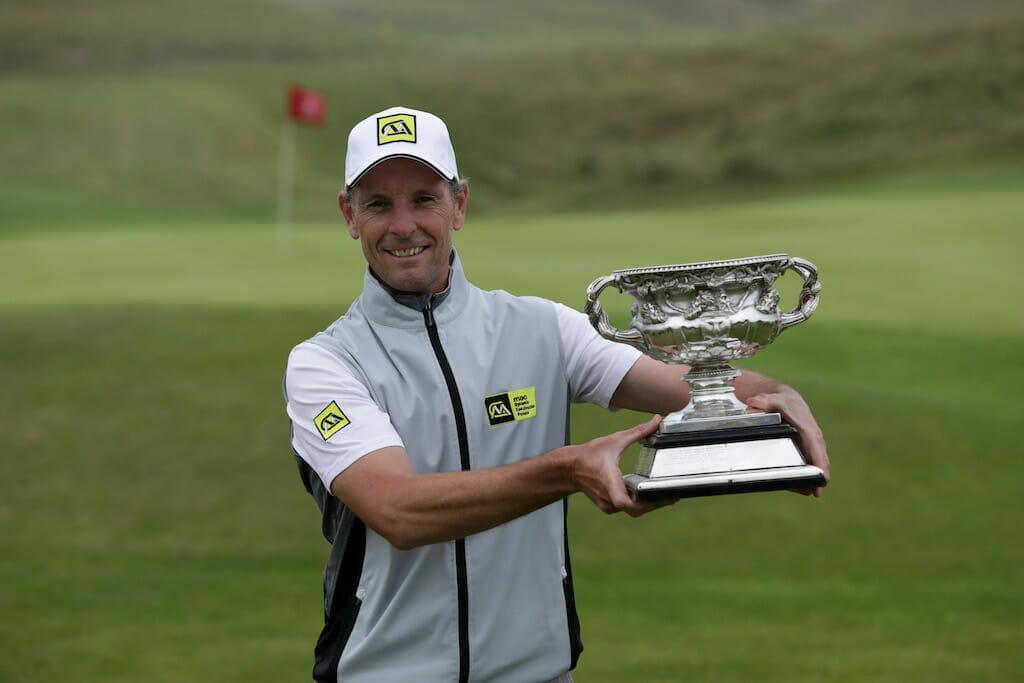 David Higgins after victory in the Irish PGA Championship at Carne Golf Links on August 07, 2021 in Belmullet, Ireland. (Photo by Patrick Bolger/Getty Images)

In very wet and windy weather, the 2012 winner capitalised on an 18th hole double-bogey from Staunton to seal victory.

“I knew I was a couple behind so I had to commit to the tee shot, try to take it on and make eagle,” said Higgins. “I hit my best drive of the week and then hit a seven iron into 15 feet (he missed the eagle but tapped in for an easy par).

“I guess it put some pressure on. Look, Mark was unlucky, but you have to hang in, especially in conditions like today. You never know what is going to happen. All you can do it work on your own ball and I did that and won the tournament. I am proud of myself for that.”

Higgins began the day five shots behind Staunton but by the 12th he had cut that lead to three shots. With the other contenders struggling – winds were gusting at 35mph – the closing holes turned into something of a match-play encounter.

Playing the 18th, Higgins found the green in two but Staunton’s approach missed the green and disappeared into the thick rough never to be found.

His provisional had also missed the green but he managed to find it and pitched onto the putting surface however, his putt to force a play-off stayed out.

“It’s been a tough time for everyone with Covid. I haven’t played golf for the last eight and half months,” added Higgins.

“I didn’t know if I was coming or going to be honest but this shows I am on the right track. I am at it long enough now to know that anything can happen when the weather is like that you have to keep trying and dig deep.

“Keep going to the very end, that’s what happened and I am after winning a huge tournament.”