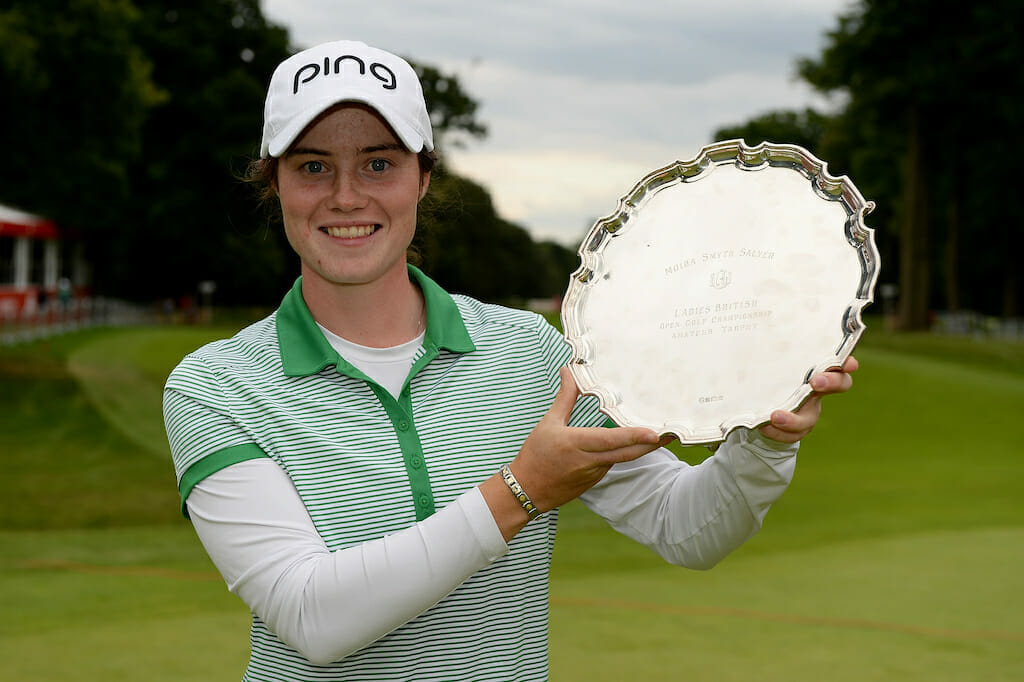 Leona Maguire lifting the Smyth Salver, awarded to the low amateur, in 2016 - Image via R&A

The stage is set for golf’s newest champions to make history at the season’s fifth and final Major – the 2021 AIG Women’s Open at Carnoustie, Scotland from 19-22 August.

Competing at one of golf’s greatest tests for the first time since 2011 are 144 of the world’s best female players including Rolex Women’s Golf World Rankings number one Nelly Korda, seven-time Major champion and Hall of Famer, Inbee Park, and home-favourite Georgia Hall who won the championship in 2018. However, it might be golf’s next generation of stars to look out for if history were to repeat itself in Scotland.

Maguire and Thitikul are no strangers to the AIG Women’s Open, having both lifted the Smyth Salver, awarded to the low amateur, in 2016 and 2018 and 2019 respectively, but are now blazing their own trail in the professional ranks.

A links specialist, Maguire is a former World Amateur Golf Ranking number one and has lifted numerous amateur titles including the Ladies’ British Open Amateur Championship, the Irish Women’s Amateur Close Championship and the Scottish Women’s Amateur Strokeplay. This season, the 26-year-old has recorded two runner-up finishes on the LPGA as well as a record-equalling final round of ten-under-par 61 at the 2021 Amundi Evian Championship.

Thailand’s latest prodigy, 18-year-old Thitikul, first emerged onto the world stage winning the 2018 Women’s Amateur Asia-Pacific and is now a three-time Ladies European Tour winner and currently leads the Race to Costa del Sol, having captured the Tipsport Czech Ladies Open as well as finishing inside the top-five on five occasions. America’s Yealimi Noh finished third at the 2021 Amundi Evian Championship and is 31st on the Rolex Women’s Golf World Rankings.

Seeking to become Ireland’s first female major champion, Maguire, said, “It would be a dream come true to win the AIG Women’s Open. I love links golf and I hope my previous experience in this Championship and at Carnoustie will stand me in good stead. Irish fans are some of the most passionate in the world and I am so proud to have the opportunity to bring this title home.”

Thitikul added, “I will never forget winning the Smyth Salver, it gave me a feeling that I belonged among some of the best players in the world and it helped to set me up for the next stage of my career. I am enjoying my first year on the LET and I can’t wait to compete at the AIG Women’s Open as a professional for the first time.”

Looking to win on their debut and emulate Japan’s ‘Smiling Cinderella’ Hinako Shibuno, who triumphed in 2019 in her first ever Major appearance, and recently crowned Champion Golfer of the Year, Collin Morikawa, are a host of 17 debutants.

Most notably are Finland’s Matilda Castren, who has won on both the LPGA and LET this season and Slovenian 17-year-old Pia Babnik, who lifted her maiden LET title at the 2021 Jabra Ladies Open having previously won the 2019 R&A Girls’ Amateur Championship.

Spurred on by the statistic that each of the last nine major champions have been first-time major winners, Castren said, “The standard of the field is so high, it really is all to play for. I am so proud to represent my country around the world and it doesn’t get much bigger than the AIG Women’s Open. Links golf is truly the purest test, and I am excited by the idea that you need to play your best golf to win. I can’t wait to make my debut and help to shine a spotlight on golf in Finland.”

Adult tickets will start from £25 with children aged 16 years or under before the Championship admitted free of charge. Spectators aged 24 years or under will be entitled to purchase youth (16-24 years) tickets starting from £12.50. A £5 Mastercard discount is available per transaction.