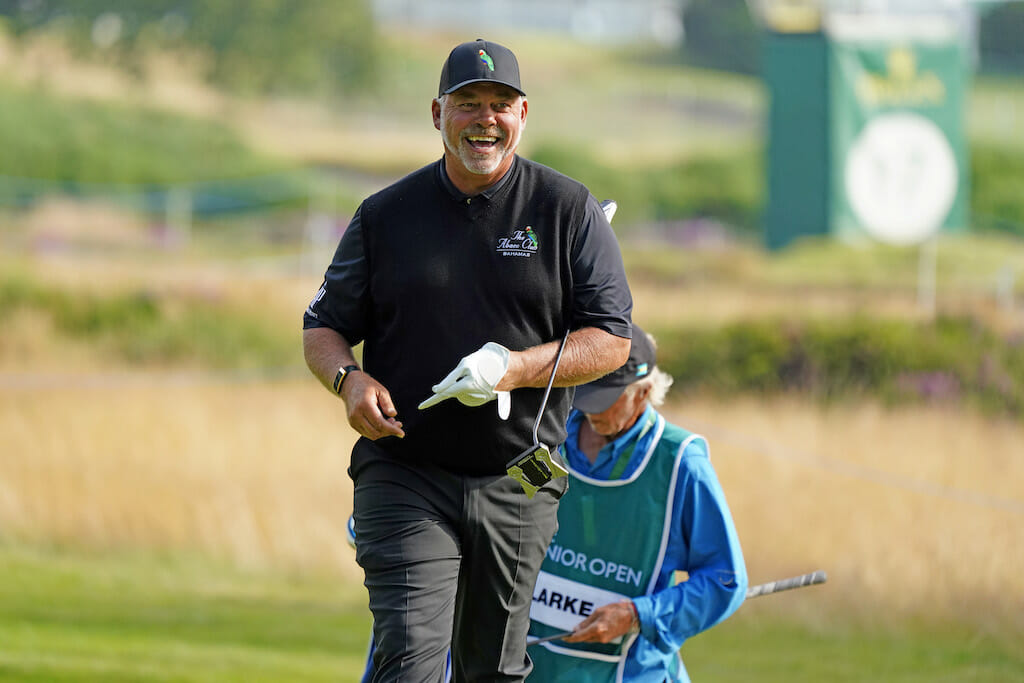 Darren Clarke insists his goal of becoming just the fourth player to win both The Open and Senior Open titles will hinge on his iron play heading to the weekend rounds at Sunningdale.

Clarke superbly fought back from dropping three shots in succession from his sixth hole to birdie four of his closing six in a second round three-under par 67. It handed last week’s defending Royal St. George’s Open winner a one-shot lead at eight-under-par.

Defending champ Bernhard Langer brilliantly eagled the first hole and tied Clarke with a birdie on 13 only to drop a shot on 16 in a three-under 67 to be tied in second with American Jerry Kelly (66) at seven-under-par. Four-time majors champ, Ernie Els, with a pair of 67s, is at six-under par.

Clarke shared the lead after day one but conditions on day two, though bright and sunny, were a little more testing with the wind swirling about the Surrey course. Looking at the now Bahamas-based Clarke’s scorecard he birdied the first, third, ninth, 13th and also the 14th holes for two days though he bogeyed six, seven and eight and then for a second day he dropped a shot the par-4 12th hole.

“I got off to a good start with a couple of birdies but then made some pretty poor swings out-of-the-blue for three bogeys in a row, and they were three bogeys I deserved despite hitting good putts that didn’t go in,” he said.

“I just kept hanging in there and making some good swings to give myself opportunities over those last six holes. So, pleased after having made those three bogeys to get back to three-under thanks to those closing four birdies as the wind was starting to swirl a bit over that back nine.”

“It would be huge to win this week,” Clarke said smiling. “We’re all old enough and we’re all getting long in the tooth to know that this is only two rounds, so there is still a lot of golf to be played yet.

“Certainly, I would like to have this week’s trophy alongside the Claret Jug but I have got to go and work on my iron-play. My iron-play today was not quite there and especially around the front nine.

“I did roll the ball well but this afternoon I do need to work on my iron-play if I want to be really in the mix come Sunday afternoon, so my iron-play is going to have to improve a little bit.”

Paul McGinley was left frustrated after his three-over par 73 that included two birdies but also five bogeys in a two-round two-over total left him in a tie for 42nn, albeit safely inside the cut-mark.