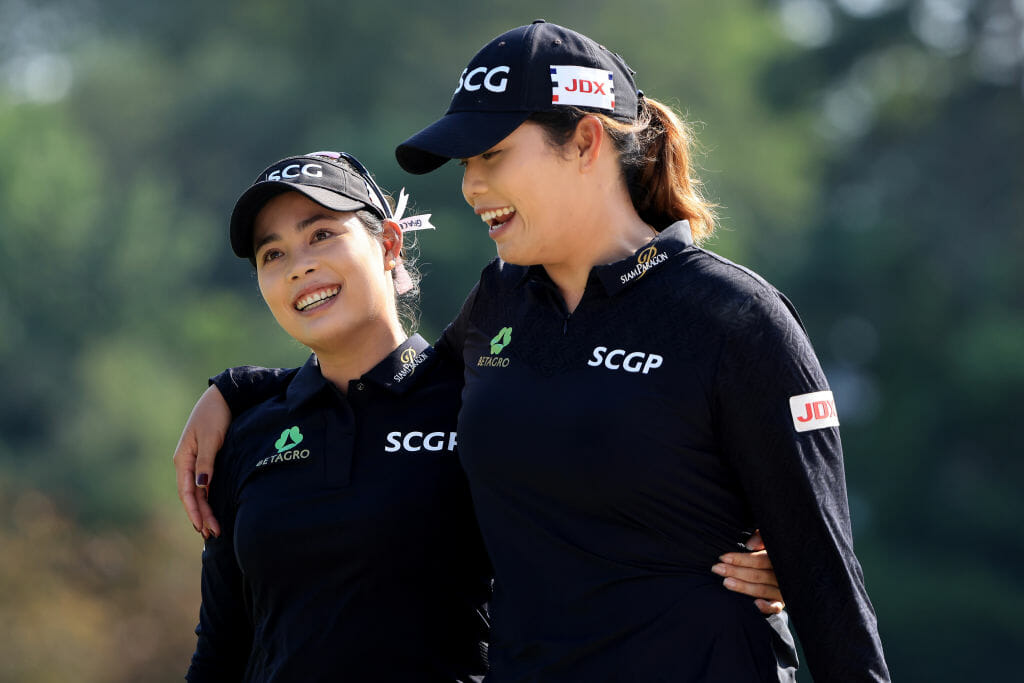 Stephanie Meadow and her playing partner Cristie Kerr gave it their all and finished a very commendable sixth at the Dow Great Lakes Invitational in Michigan.

Having struggled for momentum on Friday they found themselves five shots off the lead ahead of the best ball format of the final round but they dug in and returned a 7-under par 64 which included three birdies on the front nine.

“We off to a hot start and then kind of cooled off a lot,” said Kerr.

“But to win this thing, even in alternate shot, that one or two extra putts a day going in, we had so many good putts the last two days that didn’t go in, and that’s kind of the difference. We gave it our all, though.

“Sometimes in these formats, you look at the Korda sisters only shooting 1-under the second day in best ball, you never know what you’re going to get. You just have to try your hardest, and Steph has got a ton of heart and a very, very bright future ahead of her.”

While Meadow added; “It’s been awesome. I think just team events in general are really fun, but when you get to play with someone like her who’s a good friend and obviously a great player and kind of a legend, I learned a lot this week, so I think — unfortunately I didn’t have my best stuff today, but I still had a lot of fun.”

The Jordanstown native is still in the early part of her LPGA career and she clearly has a huge amount of respect for Kerr so when questioned on whether she picked up anything from her experienced playing partner during the week Meadow duly replied; “She (Kerr) is just fearless, and I could sense that she wants to win and I wanted to win, but there’s no backing down in her, there’s no fear, and that’s what makes her so great.”

The sisterly duo of Moriya and Ariya Jutanugarn, who go by the family nickname M&M (Mo & May) by which they are commonly known, began the day two shots off the lead but had plenty in the tank as they shot 11-under for the final round to win by three strokes (on -24) from defending champions Cydney Clanton and Jasmine Suwannapura.

For those who follow the LPGA you’d have been waiting for the water-works as both players turn into a blubbering mess when the other wins…but not this time.

“I had tears when she went in the water on the last hole. I’m like, Mo, come on. I would say maybe because we don’t know how — we don’t think like really close and we need to make birdie or keep it going. All we think is just like we really enjoy every moment out there on the course.

“We not really thinking about winning the tournament much. We just had a bit of excitement on the last hole, especially when she hit her first shot.” said Ariya.

“It’s really special. Every tournament I won she always with me, and when she won I with her. The way we played today, I just told myself, you know what, this is going to be a great memory for us to win together, and I know she really want to win for like two, three years, and I really want to do it for her, also.

“I would say this is the best moment for me because we won together. We helped each other to win the golf tournament. I know it’s like we got through so much stuff this week because sometimes I’m worried, I’m nervous to play, and sometimes she have the same feeling.

“I know it’s a really hard week for us, and the way we play, I’m just so proud of her. We give lots of high fives because a lot of putts, a lot of shots that I felt like so tough, and I know exactly what she feels. Some shots she not feel comfortable but she still have really brave to do it, so I’m just really proud of her.”