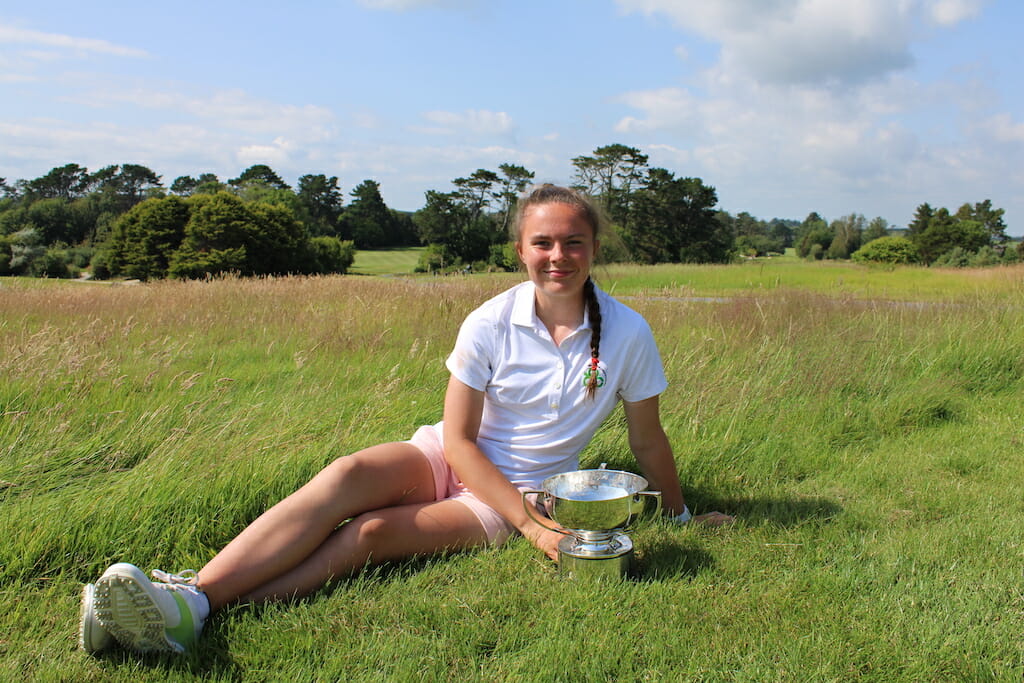 Beth Coulter (Kirkistown Castle) is Irish Girls’ Close Champion once again after she defeated Emma Fleming (Elm Park) in the final at Tramore on Friday.

Coulter’s busy schedule of late coupled with the added pressure of being defending Champion left her feeling like she had under performed in qualifying on Wednesday but her experience, even at such a young age, prevailed today.

“I’m delighted now,” said Coulter. “Obviously Emma had a great comeback there on the last couple of holes but I wanted to start well because after Ballybunion a couple of weeks ago, I didn’t want to go home disappointed.

“I held it really well until around the 12th and she started to make a bit of a comeback but I hit a great shot in there on 17 to finish it out so I’m really happy.”

Coulter won the Championship in 2019 at Galway Golf Club, beating Sara Byrne (Douglas) in the final. This time around it felt a little but more relaxed as she had her family alongside her.

“The last one was a bit more of a rush, we got off the plane from Europeans in Spain and went straight to Galway but I’m delighted to get home for a couple of days and then have my brothers and family to come down this time so I’m happy out.”

Coulter adds her name to just three other Champions who have defended their title at the Irish Girls’ Close in recent times – just Annabel Wilson, Karen Delaney and Pamela Murphy had previously completed the feat. Coulter now travels to the European Women’s Individual Championship in Italy next week alongside Julie McCarthy (Forrest Little) and Anna Foster (Elm Park).

Vicki Conlon (Enniscrone) and Sarah O’Brien (Elm Park) went head-to-head in the Pat Fletcher Plate final. Conlon looked in control throughout and, despite another fight back from the Elm Park Junior which forced extra holes, the Enniscrone native took the spoils and the trophy back to Connacht.