Clarke comfortable with opening 71 a decade on at Royal St. George’s 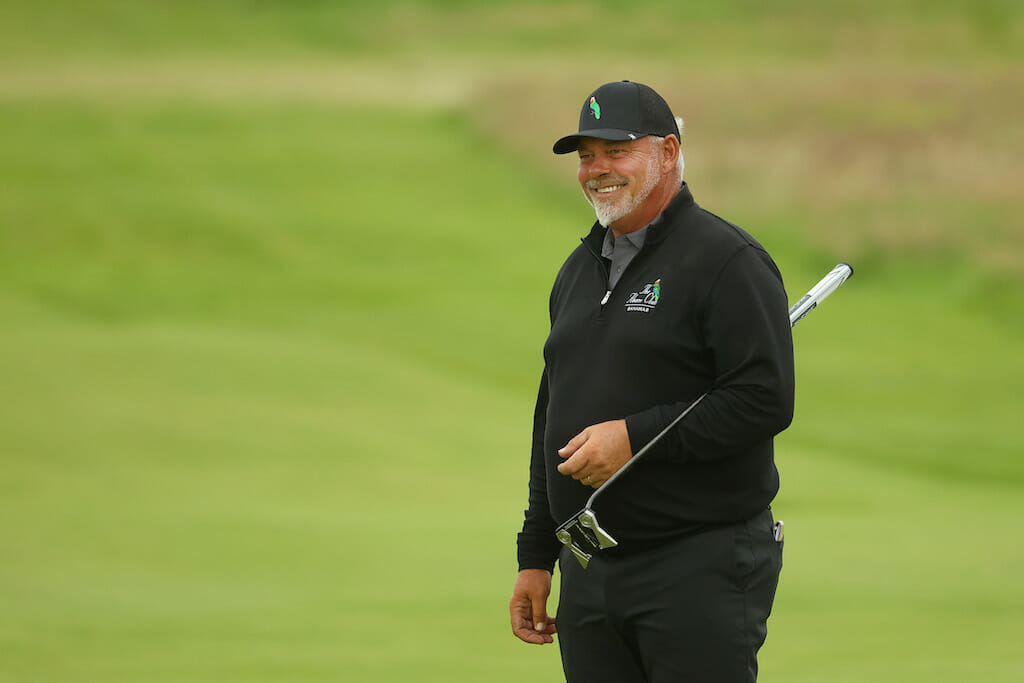 Darren Clarke may have struggled to find the greens but when he did it was a hot putter that helped the former Open Champion to a respectable one-over par 71 at Royal St. George’s.

Clarke celebrated his return to the Kent course where he won a decade ago with two birdies and three bogeys in bright but windy conditions. The soon-to-be 53-year-old bogeyed the opening hole and then picked-up a birdie at the par-5 seventh but dropped shots at 10 and 13 before a second birdie of his day at the par-5 15th.

The effort saw Clarke head to a temporary ‘Players Only’ clubhouse just outside the top-60 in what is his 29th Open Championship. And Clarke was delighted to chat with the waiting media about his round despite being reminded at the outset that he only hit eight greens in regulation.

“It was a good solid start today,” he said. “I didn’t realise I’d only hit eight greens in regulation. Sometimes that’s a funny statistic whenever you’re on links because if you’re just off the fringe, which you’re going to be an awful lot in links golf, you’re going to use the putter, so my stats may have looked a lot better than they actually were.

“I actually hit the ball pretty nicely but I missed a couple of fairways by two inches and all of a sudden when you’re in that you’re trying to run the ball up or you’re aiming away from flags to not make any stupid mistakes.

“Consequently, my stats may have been somewhat misleading today, which frequently that’s what will happen on links golf. So, overall, I was quite pleased with the way I actually hit the ball and the way I played.”

Clarke’s opening 71 matches his best opening round effort since winning golf’s oldest major a decade ago. He had signed for a 71 on day one in 2016 at Royal Troon where he would share 30th place, while Clarke shot a first round 71 two years ago at Royal Portrush but proceeded to miss the cut.

Clarke had stepped onto the first tee to a very warm reception and like all of us that follow golf, it was just great to see the stands full of spectators.

“It was a wonderful reception. I got on the first tee and the first fairway was great,” he said.

“You know, obviously with the limits and what have you this year that we have, it’s not possible to get as many spectators in as we want, but it looks to be a great crowd out there. It’s an Open Championship. Yes, we were fortunate, we had quite a few people walking around with us, and there’s people all over the golf course, which is great to see.”

Shane Lowry was also safely into the clubhouse in 71 after trading four birdies with five bogeys in a grinding opening effort. Full report on Shane to follow…