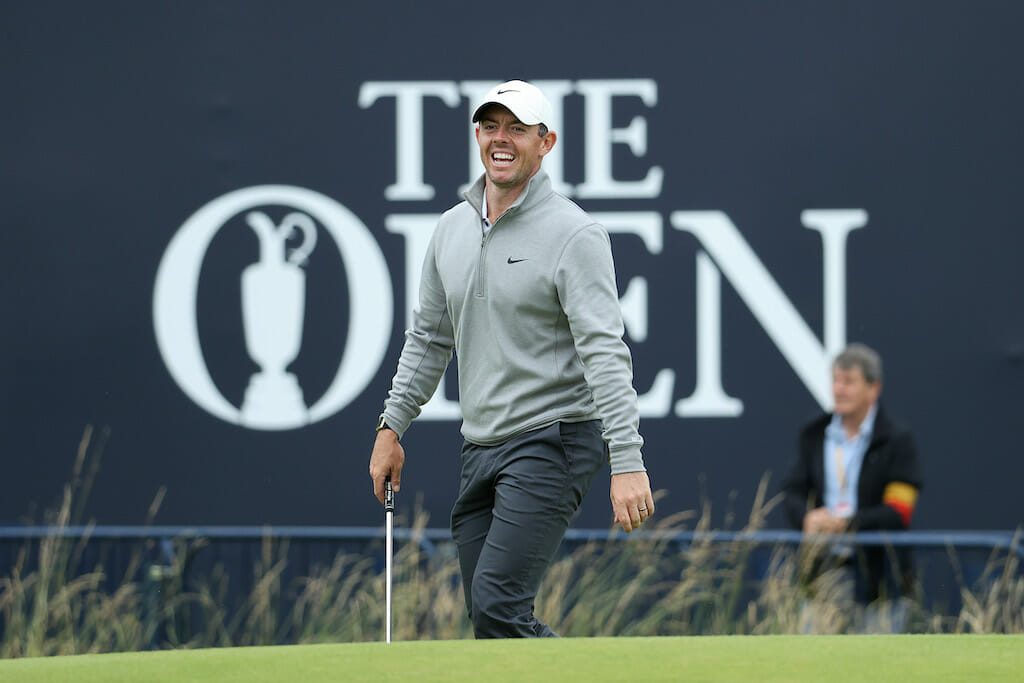 The last time The Open Championship visited Royal St. George’s in 2011, Darren Clarke proved an unlikely but most popular winner of the Claret Jug. Now, some ten years on, Rory McIlroy is drawing inspiration from his compatriot’s success as he aims to emulate Clarke, thus ending his own seven-year Major drought in Sandwich.

This week marks McIlroy’s first Open Championship since his first round meltdown at Royal Portrush. There, the occasion overwhelmed the local favourite but McIlroy has since enlisted the services of mind guru, Dr. Bob Rotella in a bid to manage expectation ahead of golf’s biggest events.

A then 42-year old Clarke had Rotella to thank for getting him in the right frame of mind prior to his maiden Major win and now it’s McIlroy who’s hoping to have landed on an even keel to put him in good stead ahead of his latest Major bid.

“I think a lot of players play their best when there is no expectation, trying to take that expectation off and that’s what happened with Darren that time,” said McIlroy, speaking at the launch of GolfPass on Sky Q.

“He felt like he couldn’t get the ball in the hole, felt he wasn’t hitting it good. He practiced, had that famous chat with Bob Rotella on the Wednesday afternoon and saw how that transformed him.

“Just when you think you have figured it all out it knocks you back a bit and whenever you feel you are lost you get a spark and off you go again. It’s a very fickle game, that’s the nature of it unfortunately, and everyone who has played the game at a high level knows that.

“You don’t want the lows to be too low but you don’t want to get too above yourself or get too high or too filled with expectation because that is no good either. Being on a pretty even keel in this game is always going to stand you in good stead.”

As far as preparations go, perhaps McIlroy’s missed cut at last week’s Scottish Open in the Renaissance Club could work in his favour. It’s afforded McIlroy an extra few days to refamiliarise himself with Royal St. George’s, where he finished in a tie for 25th behind Clarke ten years ago.

McIlroy was the first player teeing off on Sunday morning on the Sandwich layout and although the course is expected to dry out as the week goes on after heavy rain last week, these recent reps are sure to be a big benefit for McIlroy who enjoyed three top-5 finishes on the trot at The Open prior to his shock Portrush missed cut in 2019.

“As soon as I stood up on every tee box I was like, ‘Oh yeah, I remember this,'” McIlroy added, who intends to get in nine holes of practice each day before Thursday’s opening round.

“The landscape looks so barren, there’s not a lot of stuff that stands out. It’s just a bunch of dunes and it’s hard to see where the holes go. But once you stand on the tees you remember.

“I looked at the forecast and it looks pretty wet Monday and Tuesday so I wanted to get out and play and re-familiarise myself with the golf course. Now I can just sort take it a little easier.”

The rain that McIlroy predicted for Tuesday looks to have swerved Royal St. George’s and with largely sunny spells expected for the rest of the week, here’s hoping the course can dry out and firm up in order to play like the true links test this championship deserves.