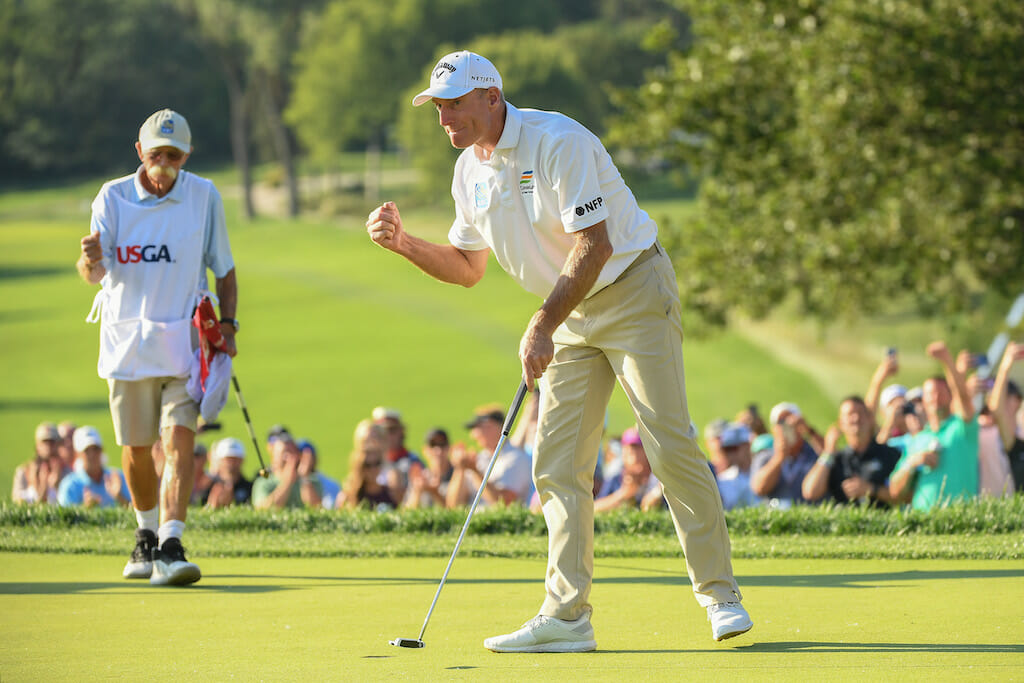 Jim Furyk bounced back from being three-over through three holes to card a one-over 71 and capture the U.S. Senior Open Championship by three strokes on debut at Omaha Country Club.

Furyk held off the challenge of Retief Goosen and Mike Weir to become the eighth player to win both the U.S. Open and U.S. Senior Open Championship, joining the likes of Jack Nicklaus, Arnold Palmer, Lee Trevino, Billy Casper and Gary Player. Furyk finished at 7-under with just six players breaking par for the week. Darren Clarke tied 28th at eight-over after a closing two-over 72.

“I still can’t believe I’m a senior,” Furyk said, a winner of his first two Tour events upon turning 50 last year. “I’m just excited. This year, I haven’t played poorly at all this year. I’ve played solid, but I haven’t contended for enough tournaments. I haven’t put myself in the positions to win like I would like to, and when I have I haven’t finished them off either.

“So I worked really hard on my game this year. I still feel like I’ve got some stuff I need to work on, but to see I guess the fruits of that labour is very satisfying. To come out in a big tournament, major championship on a Champions Tour and a great field and then on a very difficult golf course. So to get off to a rough start today and just gut it out and grind it out. And you know, I was 3-over through 3 but only finished 1-over for the day. So to really play the last 15 holes that well under the conditions was real exciting and gratifying.”

A winner of the US Open in 2003, the 17-time winner on the PGA Tour was making just his third Senior Major appearance but it was very much business as usual for Furyk, not least because he had his right-hand man of the last 22-years, Fluff, guiding him every step of the way.

“Yeah, it was good to have that nice long walk with him up 18,” Furyk said, who incidentally didn’t three-putt all week. “I mean, at that point it’s kind of stress-free. I’ve only stood on the last green and had like four putts or whatever it was to win maybe once in my career, and that was at the U.S. Open in ’03.

“Every other time it’s always been a tight battle, and 18’s always been a super nerve wracking. So it’s nice to take that walk. He’s been on the bag now for over 22 years, so it’s great to share it with him and great to have him be a part of it. And you got to think, I mean, the guy’s 73. Walking these hills, he’s a beast.”