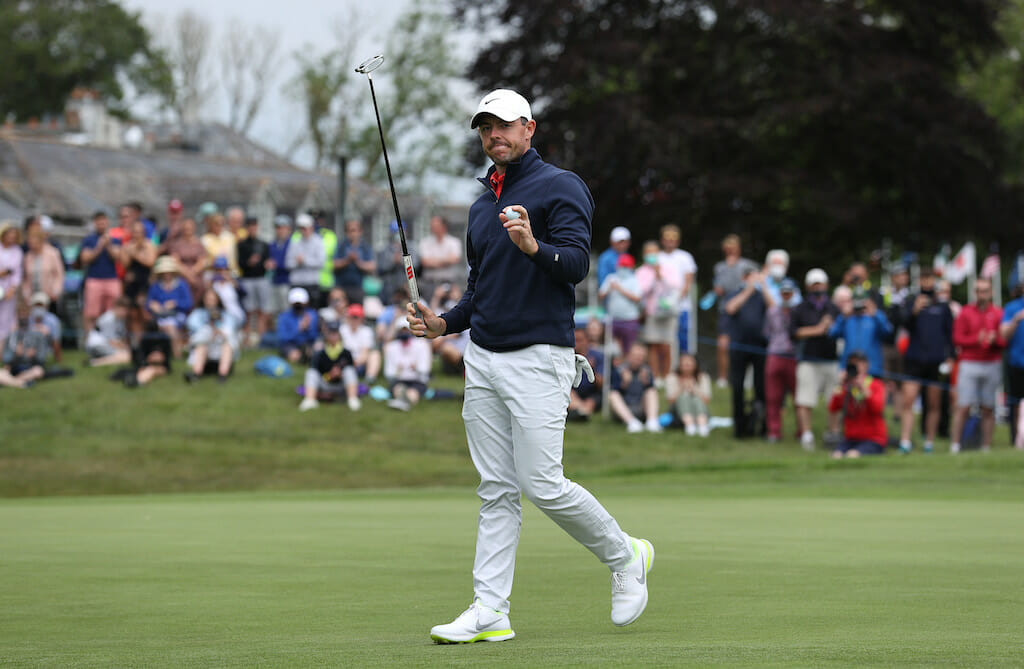 After a disappointing even par effort in pristine conditions on the opening day in Kilkenny, McIlroy hit his stripes with five birdies in an effortless bogey-free effort to move through the field and inside the top-25 at five-under.

“I got off to a better start and then once you do that, you make a couple of birdies early, you start to feel like you can make a few more,” McIlroy reflected.

“The greens were much better this morning than they were yesterday afternoon, as well. It felt a little easier to hole putts. And that’s really what I did. Everything was just a little bit better today and sort of added up to a better score.”

McIlroy’s start was always going to prove key to any leaderboard ascent and after finding bunker trouble left off the par-5 tenth tee – his opening hole – the Holywood star eked every inch out of his lay-up to the par-5, getting past the tree on the right side of the fairway and opening up the green with an ideal angle for his approach.

It was a wedge shot, followed by a rock-solid ten foot putt, that set the tone for an easy as you like outward half of four-under 32. The only surprise, given how McIlroy was swinging, was that he only added one more birdie at the first – his tenth – to his day’s haul.

Eight straight pars to the clubhouse, including a three-putt par at the par-5 fifth – his 14th – plus a great chance missed after a delightful wedge-shot approach at the last was slightly frustrating, but five-under leaves McIlroy in position to launch a weekend assault on the leaders, with England’s Dale Whitnell setting the early pace on Friday at 10-under par.

“It could have been a little better than what it was, playing the two par 5s at even par on the front nine,” McIlroy added. “Missed a couple of chances, too. But it was better.”

Meanwhile, playing in the group behind McIlroy was 41-year old McDowell, quietly going about his business after an opening day struggle left him with a mountain to climb from two-over. But climb it he did; GMac picking up shots at his first two holes before adding three more birdies in a blemish-free round of his own.

It left the tournament host just inside the top-50 on the projected cut-mark of plus-three but with the wind picking up, rain spitting, and the temperatures cooling down in the afternoon, that should prove enough for McDowell to have two more rounds to look forward to in Kilkenny where two more 67s would do just fine.