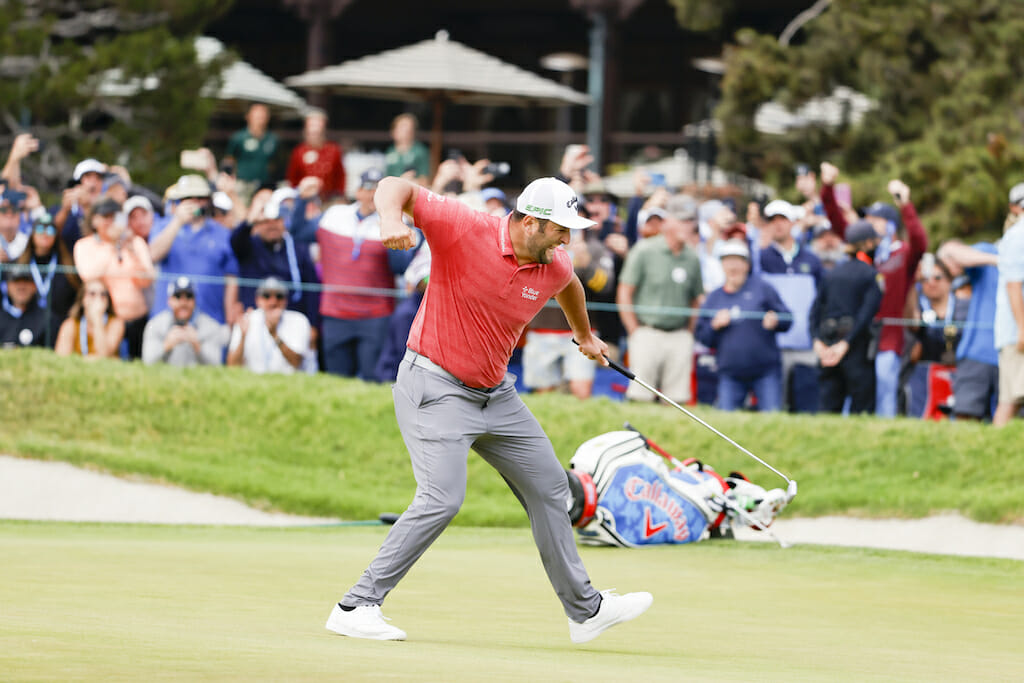 Jon Rahm celebrates his birdie putt on the 18th green during the final round at the 2021 U.S. Open at Torrey Pines (Jeff Haynes/USGA)

Jon Rahm name-checked Padraig Harrington in his winning press conference after the brilliant Spaniard birdied his closing two holes to capture a first Major title at the US Open at Torrey Pines.

Rahm became the first Spaniard ever to win a US Open, grabbing the toro by the horns in a closing four-under par 67 for a one-shot victory over South African Louis Oosthuizen. The triumph was made even sweeter given it was only two weeks ago that Rahm was leading by six shots at The Memorial when a positive Covid test put paid to his chances on the eve of the final round.

But there was nobody getting in the way of Rahm’s victory march in San Diego on Sunday, one founded on a positive mental attitude that meant the 26-year old could brush aside his Muirfield Village disappointment to claim his maiden Major win at Torrey.

“I’m a big believer in karma, and after what happened a couple weeks ago I stayed really positive knowing good things were coming,” Rahm said. “I didn’t know what it was going to be, but I knew we were coming to a special place, I knew I got my breakthrough win here and it’s a very special place for my family.

“The fact that my parents were able to come, I got out of Covid protocol early, I just felt like the stars were aligning, and I knew my best golf was to come.

“I have a hard time explaining what just happened because I can’t even believe I made the last two putts, and I’m the first Spaniard ever to win a US Open. This was definitely for Seve (Ballesteros). Usually we think a lot about him at the Masters, but I know he wanted to win this one most of all.”

For lesser players, the defeat snatched from the jaws of victory that Rahm suffered a fortnight ago at Jack’s place could’ve lingered, but after the initial disappointment, the unvaccinated Spaniard was able to take it on the chin and think bigger picture – though not without a little help from a certain European Ryder Cup captain whose seen a thing or two in his time.

“I had a few phone calls. I had a few,” Rahm revealed. “The first person who called me that wasn’t family, it was right away when I was in the isolation trailer, was Padraig Harrington, and he told me a story in which he was leading by five after 54 holes, signed the wrong scorecard, and got disqualified. He said he got a lot more from that instance, he learned a lot more than he would ever learn from the win.”

The incident in question happened back in 2000 when Harrington was disqualified ahead of round four of the Benson & Hedges International Open for not signing his opening round scorecard. The indiscretion came to light after Kiwi Michael Campbell, playing in the opening two rounds alongside Harrington, had shot a course record on day one, with The Belfry asking if the club could retain Campbell’s scorecard. In checking all three scorecards, it was noticed by the European Tour that Harrington had not signed for his own 71. Instead, somehow Campbell had signed the Irishman’s card twice.

More than two decades later and Harrington recounting the incident to Rahm proved timely – one of golf’s great minds imparting wisdom to another – and once Rahm found himself in contention on Sunday, he knew he had the golf game, and the attitude to succeed. Seven pars on the spin on his back-nine, Rahm stayed patient. Despite chance after chance slipping by, the fiery Spaniard remained composed. Then the first of two blows landed – a 25-footer at the penultimate hole for birdie before Rahm followed that in with a roaring 18-footer for another birdie on 18.

That set to target at six-under. A steep target that no player could reach. Oosthuizen came closest but Rahm was the winner. A lesson in resilience. A demonstration of patience. A perfect finish for a most-worthy champion.

“This is the power of positive thinking,” Rahm reiterated. “I was never resentful for one second for what happened. And I don’t blame anybody. It’s been a difficult year, and unfortunately COVID is a reality in this world, and it’s affected a lot of people. I got out of what happened the best possible hand because nobody in my family got sick. I barely got any symptoms.

“I have to mention, we have lost a lot of people back home. We have lost some friends. This one is to a friend of mine who was a journalist who had just started getting into golf and he was basically following me around the world of golf, and when he started he had no idea what golf was, and he passed away a few months ago from COVID. It was very quick; from the time he got it, he went to the ICU and passed away. Like him, there’s many people in this world.

“We still have to be aware of what’s going on in this world. Take care of yourself and everybody around you so we can get over this as quick as possible.”

Also looking to adopt the power of positive thinking was Rory McIlroy despite the disappointment of a two-over 73 that saw the four-time Major winner fall to a tie for seventh at one-under.

“Overall, it’s been a positive week,” said McIlroy, who had drawn to within one stroke of the lead early on Sunday as he looked to end a seven-year winless drought at the Majors.

“I gave myself a great chance today. Even through ten holes, I was right in the thick of things. It was really two holes that basically stopped the sort of run at the title. I played well. I felt comfortable with what I was doing out there. I felt like tee to green I was really solid for the first few holes, but once I made those little mistakes on 11 and 12, I felt like I was just chasing a little bit, and then ultimately couldn’t really get anything done from there.

“But overall it’s been a good week. I put up a good fight. I started the round well today. With the three-putt on 11, that sort of stopped the momentum, and then I got a little unlucky on 12 and made double from there. Take those two holes out, the rest of the week was really good.”