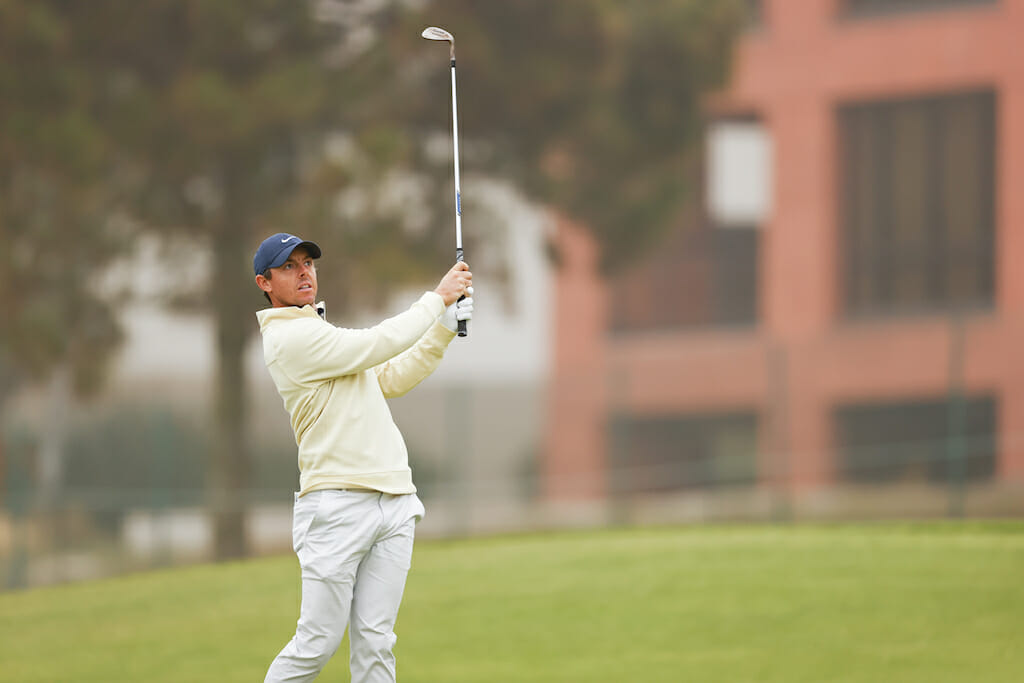 Rory McIlroy plays his second shot on the 10th hole during the second round at the 2021 U.S. Open at Torrey Pines Golf Course in San Diego, Calif. on Friday, June 18, 2021. (Chris Keane/USGA)

Rory McIlroy will need to delve deeper into his latest ‘read’ if he’s to rule the 121st U.S. Open at Torrey Pines.

McIlroy produced some real brilliance early in his second round but for most the part he teetered on the edge of the clifftop course in producing a disappointing two-over par 73 for a one-over 36-hole tally.

“So a bit of a roller coaster,” McIlroy said. “Got off to a good start. Made a couple of birdies early on and was under par for the round. Then got on a little bit of a — just sort of there’s a few holes around the turn where I just didn’t — I made a couple of mental errors and missed it in the wrong spots, and when you do that around this golf course, it’s just really hard to see a par.

“I made a few bogeys, but as you said, birdieing two of the last four holes definitely makes me feel better about the round and gives me a nice bit of momentum going into tomorrow. 1-over par, even though Richard Bland’s up there at 5-under, 1-over is right in it. So, yeah, in for the weekend and still feel like I’ve got a really good chance.”

McIlroy’s 40th round of a 13th U.S. Open was a sour cocktail of five birdies but also seven bogeys, including a horror run of three dropped shots in succession from his fifth hole and three in four holes from his 11th. The effort saw McIlroy head to the clubhouse just outside the top-30 and trailing six shots of 48-year-old English golfer Richard Bland, who recently ended a 478-event winless run to capture the British Masters.

‘Blandy’ produced a then best of the day, four-under par 67 to move one clear of joint first round leader, Russell Henley who had yet to tee-up as the English golfer looks also to become the oldest player to lead in the 121st hosting of a U.S Open. And in a huge coincidence, Bland is now ranked 115th in the world; the same ranking Phil Mickelson was on in capturing the recent PGA Championship at age 50 and 11 months.

World number 41 Shane Lowry was through to the weekend, though right on the number at four-over par. Lowry bemoaned the “easiest double-bogey of your life” in taking five at his par-3 second hole (11th) before trading three birdies and four bogeys in a three-over 74 that leaves him trailing three shots behind McIlroy and nine behind Bland, who was joined by American Russell Henley in the halfway lead at five-under.

Now, we’ve known McIlroy’s been a good book reader and if he’s to end a seven-years majors victory drought to capture a second U.S. Open, you can put it down to the philosophy of a Roman emperor born 900-years ago. It was revealed during day two by McIlroy’s putting coach, Brad Faxon that the current World No. 11 is re-reading Ryan Holiday’s acclaimed ‘The Obstacle is the Way: The Timeless Art of Turning Trials into Triumph”

The book, that McIlroy spoke about a few years back, draws on the teachings of Marcus Aurelius, who was born in 121 and was a Roman Emperor from 161 to his death in 180.

Faxon, who caught-up with McIlroy post birdieing his closing hole in near darkness of Thursday in a round of 70, explained: “Rory’s always been a deep thinker and a big reader, and he sent me a quote earlier this week about the word ‘indifference’.

“And Rory spoke of indifference being his strength and something he got from a Roman Emperor named Marcus Aurelius. He said to me that there’s not too many golfers reading quotes from Marcus Aurelius and that’s always a big thing Rory does, as he reads a lot of books including those by Ryan Holiday.

“Reading books is an important part of his game while he’s getting more comfortable working with Pete Cowen and not having to think too much about the technical parts of his golf swing.”

McIlroy’s golf swing was decent enough finding 11 of 14 fairways and a respectable 14 of 18 greens in regulation while he recorded 31 putts that included no putts at his fourth hole, four one putts and a three-putt at the 11th of his round.

McIlroy had been delighted to ended his first round in holing an eight-footer for birdie in a round of 70, only just beating the siren to end play due to impending darkness.

He commenced his second round from the 10th tee in conditions that are locally referred to as a ‘marine layer’ when the rest of the world would describe it as a mist. McIlroy parred the first before dropping a shot at the next, the par-3 11th.

We then had the first touch of brilliance from McIlroy, lighting up dismal-looking weather in spinning his second shot back to just tap-in distance for birdie at the par-4 12th hole. McIlroy then pulled off another super shot at the next in holing a 22-foot putt from just off the green, for a second birdie ‘3’, with the Ulsterman clenching his right fist in delight.

Though the delight was short-lived in sending a 10-foot par putt at the 14th nearly four-feet past the cup for a second bogey of his day. The cream-coloured, zipper top McIlroy had worn onto the first tee was now off in teeing-off at the 15th but McIlroy was still on the bogey train when his eight-footer for par lipped-out.

It was three bogeys in a row, when he found a greenside bunker right at the par-3 16th and two-putted for bogey with McIlroy taking par on 17 and then for a second day running grabbing birdie on his ninth or the 18th on the card.

Any chance of a resurgence over McIlroy’s inward half soon turned into fears he may miss the cut when he bogeyed his second, fourth and fifth holes before sinking a 21-footer for birdie at the par-4 sixth to again stop the rot.

“That was a big birdie on six for Rory and could be key if he is to make the cut,” said Faxon speaking on SKY Sports

Mcllroy parred the seventh and eight holes and then rounded-off with a fifth birdie of his round in sinking an eight-footer to be just outside the top-30 as the second half of the draw were taking to the course.

“I think my alignment was getting a little off,” McIlroy added. “So I’ll go work on that on the range this afternoon. I felt like I drove the ball pretty well. I think I drove the ball better today than I did yesterday. Just need to straighten out the irons a little bit. If I can do that, as I said, I should have a good chance.”