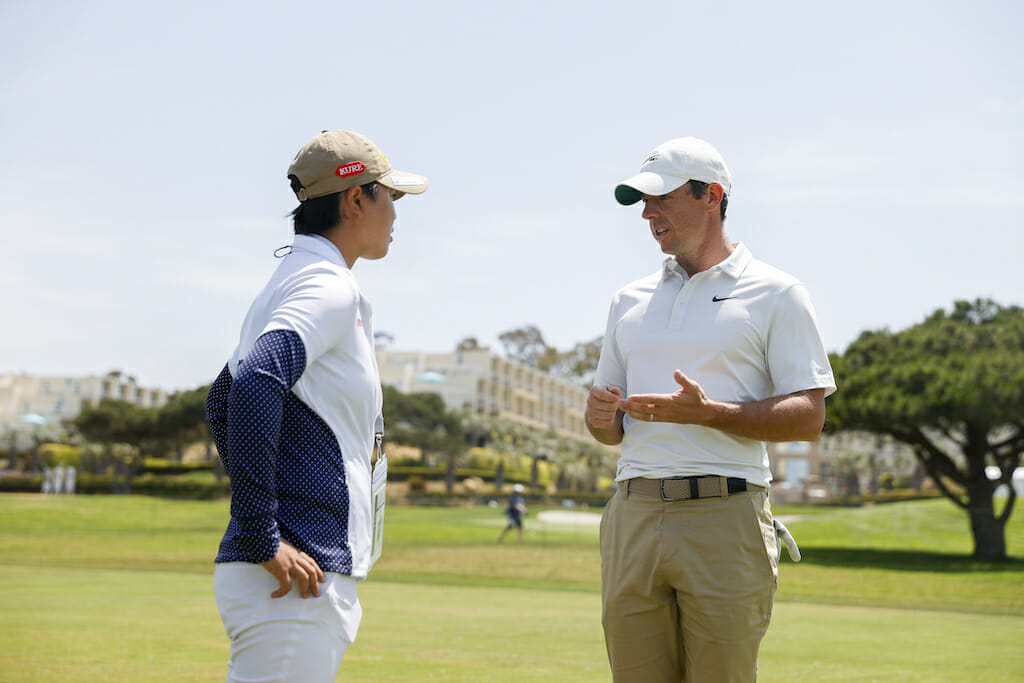 Rory McIlroy and the 2021 U.S. Women’s Open champion Yuka Saso talk on the seventh fairway during a practice round at the 2021 U.S. Open at Torrey Pines Golf Course in San Diego, Calif. on Tuesday, June 15, 2021. (Chris Keane/USGA)

Rory McIlroy shared the secrets to his own career success when meeting with the reigning U.S. Open Women’s champion, Yuka Saso.

The 19-year-old Philippines golfer birdied the third extra hole in a play-off to capture the title and in winning, she spoke of how much she was looking forward to meeting her idol – McIlroy.

Yuka had first headed to the Torrey Pines practice range but was advised that McIlroy was on the course, so she made her way onto the South Course where her wish finally came true. And after a warm welcome embrace, the duo set off with the expression on the teenager’s face … Well, what can you say? She was in golfing heaven.

Saso only joined McIlroy for three holes and afterwards spoke of her delight in meeting-up with her golfing hero, though she would not reveal what advice McIlroy had offered her.

Yuka said: “He let me go inside the ropes. That was really great. I talked to him about things. I can’t share it with you guys. I want to keep it with me.”

McIlroy was asked that question early Wednesday morning (local US time) at his press conference ahead of this week’s championship.

“It was great. I watched a lot of the Women’s Open a couple of weeks ago, and it was cool,” said McIlroy.

“I first saw Yuka and her swing and sort of read about her story at the previous U.S. Women’s Open in Texas in December of 2020, and it’s pretty cool. I think she played okay there, and obviously she played great at Olympic, and it was cool to meet her. It was cool to let her follow for a few holes.

“Obviously, the talk turned to the golf swing and all that sort of stuff, and all I really said to her — she asked how can she be consistent for a long time and how can she keep this sort of form going into the future?

“I just said, what I’ve always tried to do is write everything down. Just whatever feelings you have after a practice session, even if the swing looks the same on the video, the feelings that you have and the swing thoughts could be slightly different, and those feelings and those thoughts can come and go day to day. That’s just the way golf is.

“I think if you write everything down and sort of keep a journal of that sort of stuff, it’s always a reference point to go back to. So that’s all I was trying to tell her. It’s boring to be at the top of the game for a very long time!

“You just have to keep doing the same things. Whatever works — and it is, it’s mundane, and it’s tedious, but everyone’s got a blueprint of what their swing is, and if they keep on top of it and they do the same things, do the same drills, over time, you fast forward 20 years, you’re probably going to have a really good career.”