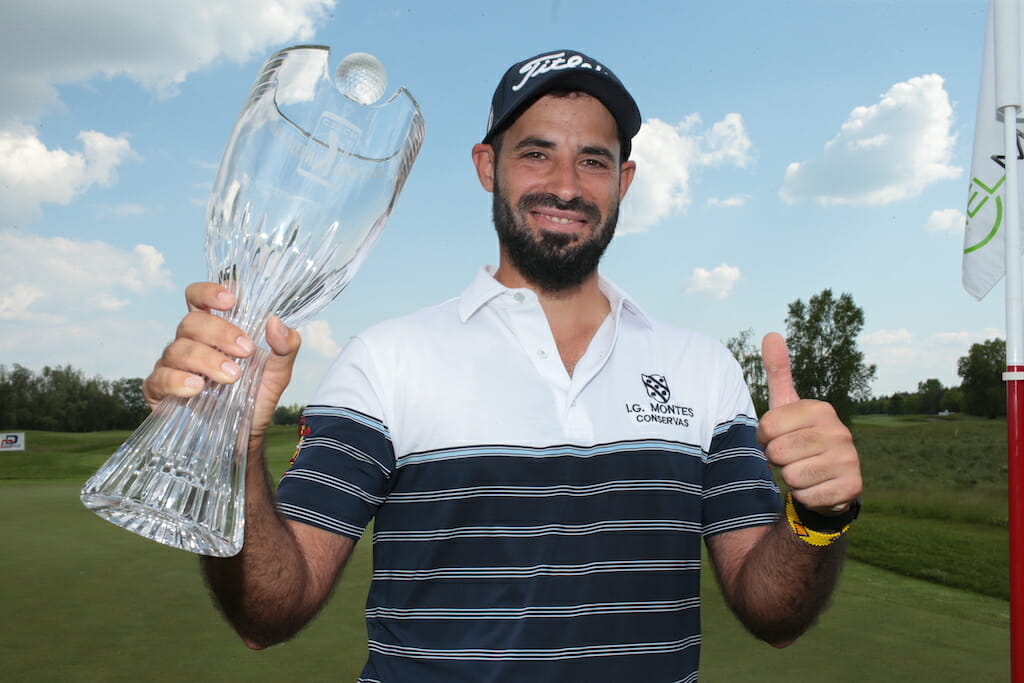 Conor O’Rourke banked four more rounds of competitive action but was left to settle for a top-50 finish as Santiago Tarrio claimed a maiden European Challenge Tour victory in dramatic style at the REAL D+D Czech Challenge, winning in a play-off on the fourth extra hole.

Naas professional O’Rourke finished the tournament on four-under par, the same as his 36-hole tally after adding rounds of 73 and 71 over the weekend to tie 44th. The 29-year old traded two birdies with one bogey in a quiet final round effort and pockets a cheque worth €1,020 for the finish.

It was all about Spaniard Tarrio on Sunday, however, after he fired seven birdies and an eagle in his final round at Golf & Spa Resort Kunětická Hora, signing for a round of 64 to finish on 17 under par to share top spot with Norway’s Kristian Krogh Johannessen and Frenchman Julien Brun.

The trio parred the first three play-off holes, but Tarrio entered the winner’s circle on his 42nd Challenge Tour start after a birdie at the fourth time of asking.

In regulation play, Tarrio started the day six shots off the pace but quickly reduced the deficit as he made the turn in just 31 strokes, carding three birdies and an eagle on the front nine.

Three consecutive gains from the tenth hole followed and a birdie on the 17th cancelled out a bogey on the 16th hole as he signed for an eight under par round, facing a nervous wait in the clubhouse as he finished an hour before the final group.

“The moment I thought it was all over was on the 16th,” he said. “I played the drive down the middle of the fairway and I missed the hole three foot to the left and I made a bogey so I thought my opportunities were gone but I got a long putt on the 17th and made a birdie.

“I thought to myself that I needed one more on the last couple of holes and the round is good, but I never thought that I would have a chance of winning it, there were a lot of leaders within six or five shots behind me and I thought that if I made a good round I would maybe be in the top four or five but I didn’t think I would win it.”

Johannessen, who held the 54-hole lead, birdied the 16th to join Tarrio on 17 under par, while Brun made it a three-way tie after a birdie on the 18th. Dutchman Robbie van West led on 19 under par, but dropped three shots on the closing three holes to settle for a share of fourth.

After three trips down the 18th hole in the play-off, the trio then played the par four tenth. Tarrio found the green with his second shot and rolled in a birdie putt from over 30 feet to secure his first professional victory since winning twice on the Alps Tour in 2018.

“I tried to play my best today,” he added. “I did play very well but my putts in the first two days weren’t the best. I never thought about the possibility of winning, but I tried to make birdies and finally I got to the play-off and I tried my very best in the play-off.”

“I am a little tired as this was my seventh week in a row, it’s almost too much but I am so happy for myself and all my team, I have a very nice team who support me in the bad moments and this moment is for all the team, not only for me.
Tarrio, will be back on the tee next week in his home country for the first event of the Spanish Swing taking place at Iberostar Real Club de Golf Novo Sancti Petri in Cadiz and has admitted that he is already focusing on competing again.

“At the moment I will focus on the next two events in Spain,” Tarrio said. “I need to improve my golf to I can compete on the European Tour, but here there are so many good players and it is so difficult to finish in the top 20 or top ten of the Challenge Tour ranking but I have tried to work a lot every year and my dream is to play on the main Tour in one or two years, so that’s what I’m working towards.”